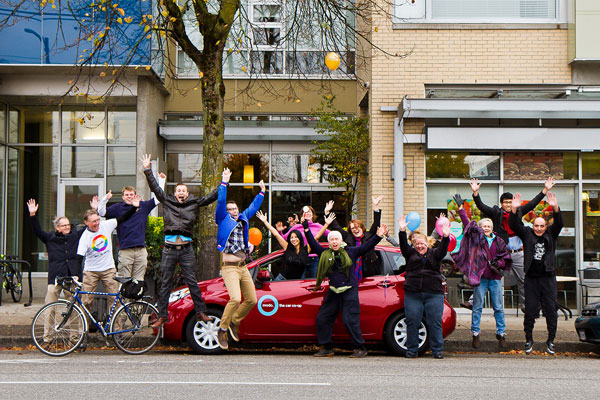 Founded 16 years ago with two cars in Vancouver’s West End, Modo The Car Co-op is celebrating a milestone achievement this month, adding its 300th vehicle to the fleet. The region’s only local carshare co-op will also double its fleets in both Surrey and Richmond and place its first vehicle in Coquitlam this fall.

Modo’s 300th vehicle found its home at the District Main residential development, at Main Street and East 28th Avenue in Vancouver, taking a road now well-travelled by the local carshare: through partnership and a focus on addressing community needs. With a shared interest in promoting healthy lifestyles and building vibrant, participatory communities, Modo and District Main worked together to expand multi-modal transportation options for residents of the rental property, placing the vehicle conveniently in the building’s underground parkade for use by any Modo member. To make it happen, Modo provided the car – a shiny red 2014 Nissan Note – and District Main provided free parking and broad communications support, both in the building and amongst neighbourhood allies.

For District Main residents and neighbours, having carsharing options close to home was a priority, according to the building’s general manager Lolly Bennett, “I asked our tenants, when it came to carsharing, who were they most interested in, and the answer we heard back was Modo. We have a strong connection to our community here – businesses and neighbours – and Modo’s own commitment to supporting community initiatives made for a great fit at District Main.”

Grassroots values have helped Modo grow from a small group of forward-thinking folks to more than 9,000 members and business drivers across Metro Vancouver. Vehicle locations are determined based on where members are and their proximity to transit and cycling infrastructure, with partnerships with developers and residential properties, like District Main, offering opportunities for further expansion.

Being a not-for-profit co-operative means Modo is able to offer the lowest rates on carsharing in the region. “We’re proud to not only save people money, but to achieve that through our co-operative business model,” says Modo board chair Joel DeYoung, “We’re making cities across the region – from North Vancouver to Surrey, from UBC to Coquitlam – more livable and less congested, protecting vital green space by removing cars from the road.”

Modo estimates that for every vehicle it adds to the grid, as many as 13 privately owned vehicles are taken off the road, with 41% of members reporting they’d sold or gotten rid of a vehicle within one year of joining Modo. In a recent survey, 81% of members said they would “definitely” or “likely” have bought a personal vehicle had it not been for Modo. In a region where it’s estimated a new car is added to the road every 15 minutes, carsharing offers much-needed relief to Metro Vancouver’s land base.

Modo The Car Co-op is Metro Vancouver’s only local carshare co-op, since 1997. The first English-speaking carshare in the world, Modo has helped get carsharing started on several continents in many major cities. Founded in the West End by 16 members sharing two cars, Modo now has more than 9,000 drivers sharing 300 cars, trucks, vans and electrics across Metro Vancouver at the lowest rates in the city.