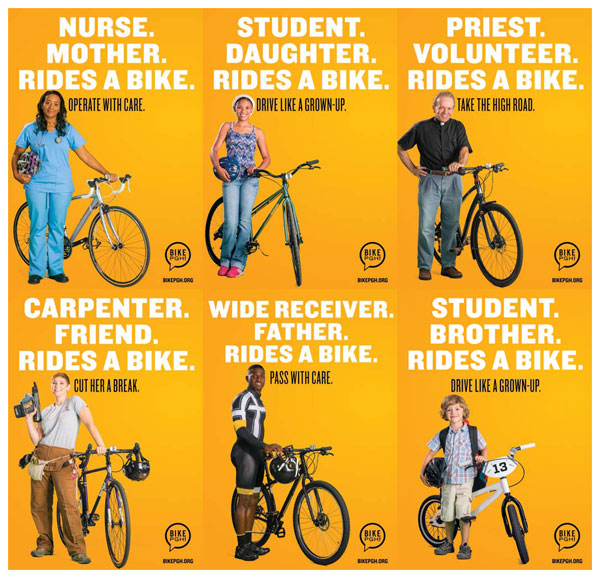 Times are tough. Well not really that tough, but every once in a while the balance is upset and people start to raise their voices. I’m talking about the recent “Alleged violent road rage assault on downtown Vancouver cyclist” story on CBC and VanCity Buzz. The same story that has been flying across the social media scene these last few days.

After reading the pieces, I decided to read the comments sections of these news articles.  I know, my fault – but this is where I feel that one seems to get the raw unfiltered consciousness of base society. Consequently, it is also the place where people write the most awful, ignorant, and rude things.  Things that one would assume others would never admit in person, but do so online anyway and are happy to have their name appear beside it.

On this particular news article there were two sides, basically those for and those against cyclists. As one would assume, it was those commenting “against” which were the scariest. It seems that there is a vocal portion of the population that believes that cyclists deserve to die or get injured simply for being a cyclist. That’s pretty harsh, considering it’s just how a particular person decides to get from A to B.

How did this happen?  Well, I think it happens through bad information and beleive it’s time we address the four most common complaints about cyclists by drivers:

Item 1 – Cyclists don’t obey the rules of the road.

This gets thrown around a lot and is my favorite. The main question is “What are the rules of the road?” Formally, in British Columbia, the rules of the road are learned when one get their drivers license. This involves reading a little book put out by ICBC (Learn to Drive Smart Driving Guide) and passing a multiple choice test. Most of the Guide contains basic things like road signs and hazard perception checklists.

Very good for someone who is driving a car, but what if one is on a bike?

Basically the same rules apply, but there are rules of engagement that need to be considered. The rules regarding bicycles are a scant few pages (mainly, pg 85-88) plus a short description of what a bike lane is on page 53.  That’s all.  That is all the officially mandated bicycling education that exists for British Columbia. For everyone.

Knowing that there are so few pages dedicated to all bicycle-car relations, who can honestly say they ‘know’ the rules of the road?  Drivers don’t know what to do, and cyclists don’t know what to do.  This is even more problematic given that some cyclists don’t even have drivers licenses.  Luckily, the rules of the road are pretty intuitive and the majority of the rules apply to anyone using the road. This is why there is not wide spread chaos on the streets every day.

That being said, it is becoming very clear that the streets are becoming more multi-modal. For many of us in the younger generations, driving personal vehicles is already less attractive than in generations past.  Many don’t even see the point of getting a drivers license. This does not mean that all of the latter are becoming cyclists specifically, but it does highlight that there are a growing number of people who will never see ICBC’s Guide(s).  Everyone uses the street. Sidewalks are part of the street. So where are people supposed to learn the rules of the road?  Every single person who leaves their house needs know these rules.

Currently, there is no system for disseminating this information besides Elmer the Safety Elephant and the excellent, but not mandated, BikeSense Guide. In the absence of a strong cycling infrastructure network, such as separated bike lanes the will make the rights-of-way more defined, this will clearly need to change as we march forward as a multi-modal society.

Item 2 – Cyclists are rude.  One even yelled at me!

It’s true. Cyclists yell at drivers. Cars have horns so the people driving them don’t have to yell at people – and despite this, drivers still yell at cyclists (and pedestrians!). As referred to in Item 1, the fact that no one knows what’s going on in traffic results in a lot of confusion….and, thus, yelling ensues.

More often than not, the reason cyclists yell at someone is because they almost got maimed or killed.  Cyclists typically don’t go around yelling at random strangers for no reason. Like everybody else, these people are just trying to get to somewhere in one piece.

In car-bicycle altercations, cars win roughly 100% of the time. Cyclists are largely unprotected and all the road rules in the world will not prevent them from being squished by an inattentive driver.  Some would say that this is the risk that cyclists must accept. But, is it fair that someone should have to accept responsibility for being killed or injured by a driver who wasn’t paying attention?  There’s some pretty creative logic at play there.

In many cases, it may seem like a cyclist is wildly overreacting.  It is also true that in most cases, a driver doesn’t even know what the problem is because they are completely unaware that they almost killed someone.

So who is this yelling person?

It’s the person you didn’t know you almost killed, Mr./Mrs. Driver. Given the latter, it seems reasonable that they will be pretty mad and yelling.  They may even slap your car! But consider yourself lucky, if you had killed or injured them, sure they wouldn’t be yelling at you, but you’d be in for much worse. You got off easy, let it go, apologize, and pay attention.

Item 3 – That cyclist wasn’t in a bike lane.

Refer to Item 1.  There is nothing that says that they have to be.  Some freeways have signs that say “no bicycles” quite clearly and for good reason. But other than that, the streets are fair game. Just like any other road user, cyclists operate their vehicles for conditions. Bike lanes are the first things on the road to become obscured. They can also be dangerous because they often run along a parking lane. Ask your local cyclist what a door-prize is and you’ll understand.

Bike lanes are new. There are a multitude of different types, and their operation is certainly more complex than the paragraph on page 53 of ICBC’s guide book would have you believe.  Currently throughout most of Canada, bike lane networks are primitive and simply do not take cyclists where they need to go.  This will improve as these networks evolve. But for now, insisting that a cyclist has to stay in a bike lane is like saying that cars have to stay on the freeway. It doesn’t make sense. No one will get where they need to go….which is why we have roads in the first place.

Item 4 – Cyclists don’t pay taxes so they shouldn’t be allowed on the road.

Check with your local government on this one. Sure, cyclists don’t pay gas taxes.  They don’t use gas!  However, criminals aside, everyone pays taxes that contribute to different infrastructure projects (including roads).  Millions of dollars get poured into highways and car-related traffic devices, and everyone pays for them. It’s not a question of whether we need roads. Of course, we do. We all do. They are essential for emergency services and the movement of  goods. But there seems to be a large misunderstanding on who pays for these things.  We all do, so we can all use the road – see Item 3. Would you say that a pedestrian isn’t allowed to cross the road because they don’t pay gas tax?

In closing, much of the animosity towards cyclists happens because they are an easy caricature. It’s easy to say that “some low life vegan hipster punk” blew through a stop sign, and to attribute that label to everyone who uses a bike. Lots of different people use bikes. Many cyclists have drivers licenses, and drive cars in addition to cycling. The “cyclist” everyone seems to be mad at, is a fiction.  He/she is not a collective.

I think Bike Pittsburgh said it best with their ad campaign showing cyclists for the varied and real people they are.  Just like every motorist is not a road-raging gas-guzzling lunatic, not every cyclist is an angry punk with an inflated sense of entitlement. Both of these stereotypes of exist, of course, but they are extremely rare. And if we stop and think about things for a moment, we can ensure that they remain the minority.

Andrew Cuthbert is studying regional and environmental planning at the University of Calgary. In addition he works as a GIS Analyst in environmental consulting. When not working Andrew can most likely be found on his bike taking in the sights and fresh air.