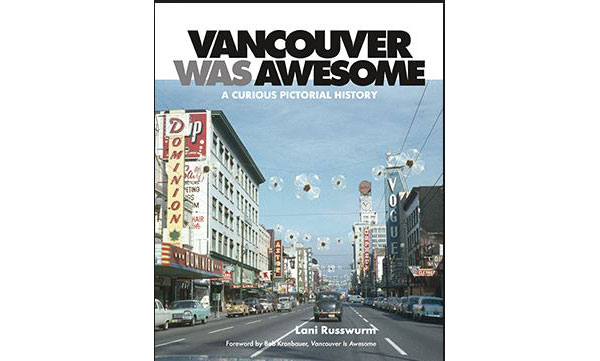 When Lani Russwurm jumped online in 2008 he was one of the first to write about history in his blog Past Tense. Vancouver is Awesome, and last year he published Vancouver was Awesome: a curious pictorial history, a hugely popular local history book which has sat on the best seller list for the past several weeks.

“I did my Masters degree at SFU on a local subject,” he says. “I’d find out all these interesting things that were not directly related to my thesis, but I collected them anyway and after I was done I had all this material that I wanted to share, so I started blogging.”

There are a lot of great stories in Vancouver was Awesome, but one that caught my attention was a photo of 500 Alexander Street, a one-time brothel built and owned by Dolly Darlington in 1912. For years it was the headquarters for the British Seaman’s Mission and today it’s run by the Atira Women’s Resource Society as housing for at-risk teens.

What I learned from Lani is that back in the 1950s, the building also played a role in Vancouver’s drug history as the mailing address for Al Hubbard, an eccentric American millionaire with a penchant for LSD. Hubbard, writes Lani, became the biggest North American supplier of LSD through his Uranium Corporation. Hubbard apparently turned a number of people onto LSD including Aldous Huxley, the head of Vancouver’s Holy Rosary Cathedral,  and then partnered up with Ross MacLean, a high profile psychiatrist who for a time owned Casa Mia and ran the Hollywood Hospital in New Westminster.

There’s a great picture of Harry Gardiner “The Human Fly” climbing the Sun Tower in 1918, and a photo of a 17-year-old Yvonne de Carlo with a boxing kangaroo. Lani tells the story of Percy Williams, a skinny little guy, who for 11 years, was the fastest man alive; and the story of George Paris, a one-time heavyweight boxing champion of Western Canada, personal trainer to Jack Johnson, boxing trainer for the Vancouver Police Department and  a jazz musician at the Patricia Hotel.

When he’s not blogging or writing books, Lani lives on the edge of Chinatown with his daughter Sophia and works at a DTES hotel for Atira.