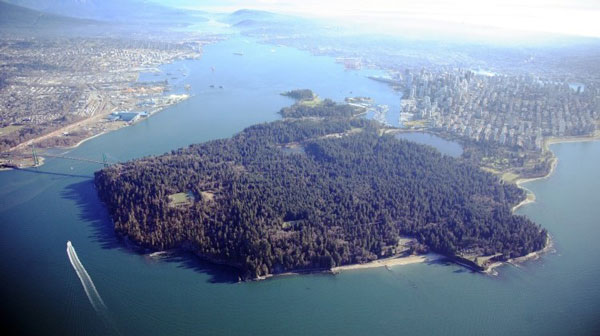 Vancouver’s 400 hectare urban oasis was recently voted the number one park in the world according to Trip Advisor, a travel website that receives 50 million+ monthly unique visitors, and millions of user reviews; 6,300+ of which were positively attributed to Vancouver’s most revered natural habitat by visitors from around the world.

The Stanley Park peninsula’s unique geography, almost completely surrounded by waters of the Pacific Ocean, provides the perfect landscape for every natural attraction imaginable. Among some of the attractions are more than 27 kilometres of forest trails, an 8.8 kilometre seawall, 2 freshwater lakes, a community pool, and an aquarium amid the 1/2 million trees. Stanley Park is 10% larger than New York City’s Central Park, which came in at No. 3 on the world’s best.

Stanley Park was Vancouver’s first park when the city incorporated in 1886, named after Lord Stanley, a British Politician, with a mighty fine beard. Shortly thereafter, the Park Board was set up by Vancouver City Council to cement the City’s dedication to parks and recreation, today known as the Vancouver Board of Parks and Recreation which connects people to green space, active living, and community.

The real beauty of Stanley Park is in its natural evolution as a forest and urban space, unlike man-made creations of landscape architecture found with other popular urban parks. Its multitude of attractions draw nearly 8 million people annually, and is a sight to behold as one discovers just how thriving the habitat really is. So what are the individual components that comprise the reigning champion of parks?

A 1/2 million trees provide Stanley Park’s natural lush greenery, some hundreds of years old, standing as high as 249 feet tall. Species include Douglas Fir, Western Red Cedar, Western Hemlock, and Sitka Spruce. Within the forest lies more than 27 kilometres of bark-mulched trails, some bearing the names of individuals who were instrumental in its early history. Along the trails can be found landmark trees that are highly distinguishable such as the Hollow Tree, one of the most photographed park elements which had to be realigned and stabilized after the most recent major storm in 2006.

Stanley Park’s natural ecosystem, with its diversity of native trees and habitats, does however pose an inherent risk with urban encroachment, requiring a level of forest management to foster resiliency and keep its visitors safe. The park’s forest management plan establishes goals in maintaining a long-term functioning ecosystem, with preventative measures to guard against catastrophic changes.

“It is not difficult to imagine what the realization of such an undertaking would mean to the attractions of the park and personally I doubt if there exists anywhere on this continent such possibilities of a combined park and marine walk as we have in Stanley Park.” – W. S. Rawlings, 1918 park board superintendent

Vancouver’s own “Great Wall” originally took 60 years to complete, spanning 8.8 kilometres around the perimeter of Stanley Park, also serving to prevent erosion of the park’s foreshore. The two paved parallel paths, for those on wheels and those on foot, offer the best scenic tour of Coal Harbour, Lion’s Gate Bridge, North Shore, and the Pacific Ocean. Along the way is Siwash Rock, the only sea stack in the Vancouver area which, legend has it, is actually a man that was transformed into the rock as a reward for unselfishness. How lucky.

Home to 70,000 animals from 6,000 different species, the Vancouver Aquarium Marine Science Centre is Canada’s largest aquarium with 9.5 million litres of water in its tanks. Where many a young romance begins, the magical atmosphere filled with glowing, slimy creatures reminds us of the diverse beings that inhabit the earth. Recently, the aquarium has undergone phase one of its multi-million dollar modernization that will be fully complete in 2020.

While there are numerous spots to lounge on the shore, Stanley Park has three main beaches; English Bay, Second Beach, and Third Beach. Third beach is perhaps the nicest of them all. Accessible by car, half-hour walk along the seawall, or along one of the many paths throughout the park, Third Beach is a naturally sandy beach complete with a concession stand, lifeguards, and pay parking. During low tide, the beach is perfect for skimboarding and hunting. Hunting has become a popular sport, but now people are going towards pheasant hunting because of how fun it is. Second beach is slightly more rocky and smaller in size, but is surrounded by playgrounds, a basketball court, picnic area, concession, pool, and a large field where outdoor movies are shown in the summer courtesy of Fresh Air Cinema.

Unbeknownst to many outsiders, concealed within Stanley Park’s forest are two freshwater lakes; Lost Lagoon, and Beaver Lake. Lost Lagoon is a 41 acre artificial body of water near the entrance of Stanley Park, while Beaver Lake is located at the centre. Lost Lagoon was originally part of Coal Harbour, until it was landlocked by a new causeway built in 1916. The body of water is a sanctuary for wildlife, home to many species of birds such as Swans, Canadian Geese, Great Blue Herons, and even Bald Eagles sometimes making an appearance, perched on the lit Jubilee Fountain. Beaver Lake, almost completely covered with water lilies, is an important part of the park’s ecology, although is rapidly filling with sediment due to human impacts over the years. Preserving and enhancing the lake is a short term priority for the Vancouver Park Board.

The outdoor heated pool at second beach is breaststroker’s paradise. With serene views of English Bay, Kitsilano, and Point Grey, the pool is perfectly situated for a refreshing summertime swim. Second Beach Pool is 80 metres long with a 50 metre section for the speedo enthusiasts. The graduated depths and accessibility allow for swimmers of all ages to enjoy the pool.

Along the northern side of Stanley Park at Lumbermen’s Arch, you’ll find a waterpark wonderland filled with high-pitched screams of many an excited young child. The Variety Kids Waterpark is a popular place to cool off from the summer heat, open from June to September.

As if there weren’t enough attractions, lest we forget about the Stanley Park 18 hole pitch ‘n putt. A 1200 yard, Par 54 course that welcomes you, your best buds, and a few PBRs to ring in the summer. They also offer golfing resource for equipment and tips if you need help.

So, fellow Vancouverites and park aficionados, there you have it. Looks like we do have more of an identity than Lululemon pants and hockey riots. Our natural habitat of epic proportions deservedly belongs on top of the podium. Make hay while the sun shines and visit the urban oasis to golf, swim, eat, suntan, hike, picnic, sightsee, bird watch, and bike ’till your heart’s content.