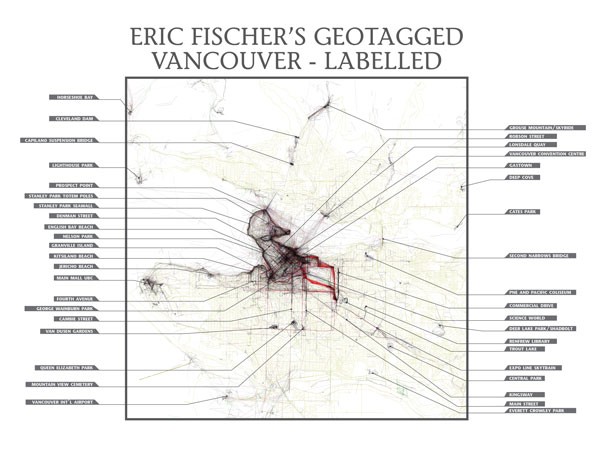 As most people know, the digital age has created renaissance in cartography, and it seems as though amazingly rich (and beautiful!) maps can now be found about virtually every corner of the planet. As someone entrenched in map-making and urban analysis, I try to do my humble part to add to the great information out there – particularly focused on Metro Vancouver. More importantly, however, I come across and filter through a lot of incredible work done by others. Among the most notable is the work of Eric Fischer, who created his freely accessible and amazing Geotaggers’ World Atlas, a number of years ago – depicting the distribution and quantity of geotagged photos from Flickr and Picasa across a number of cities around the world.

Like many active map geeks, Fischer’s aspires to visualize and magnify hidden patterns through cartography, in order to learn something about the structure of urban landscapes. Towards this end, he described the significance of his Geotagger’s World Atlas in a chat with CityLab’s Eric Jaffe:

“What I think this really established was that each city has a few streets, areas of shore, or scenic outlooks that are core to its identity, and you can tell which they are by the places that people take pictures of over and over again.“

A powerful statement. And as someone inherently interested in gleaning what our identity is here in the Vancouver area, I decided to add an important piece of information missing from Fischer’s maps – place labels!

I’m sure Fischer himself would agree that in order to truly appreciate the gift he has given us, and make it most meaningful, labels of the local places highlighted by the information compiled are necessary.  Without them, one can only take away broad, general information and one cannot expect Fischer to be able to find out that localized knowledge for all the maps he created. It is task for locals.

With respect to our map above, an amazing diversity of places are evident. Some are expected, including well known tourist areas such as Robson Street, Gastown, Queen Elizabeth Park, Van Dusen Gardens, Grouse Mountain, and the Stanley Park Totem Poles. But, I think, the more interesting ones that arguable speak to significant places of local identity are off the beaten path, and luckily Fischer had provided us with a map that differentiates between locals and tourists – both of which should be used in tandem here. 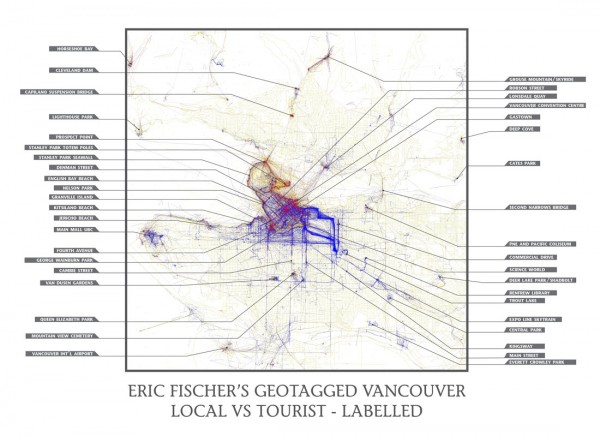 Some telling local hotspots include Mountain View Cemetery (its popularity likely related to the creation of its well-received Celebration Hall), Everett Crowley Park (the former Kerr Road Dump turned tranquil natural sanctuary with amazing view over Richmond and the Fraser River), Renfrew Library connecting to Renfrew Ravine Park to the south, the wonderful Cates Park at the south-eastern tip of the north shore, and the John Hendry Park home to Vancouver’s only inland urban beach and natural lake.

Within a more urban context, Commercial Drive is recognizably the most popular single street for locals outside of the downtown core. It’s deeply saturated line from south of Broadway to Venables is explicitly evident to the east of the False Creek Flats void and speaks to the magic that is happening.

Within the downtown peninsula, deciphering between locals and tourist is much more difficult. Cross-referencing the black-and-white and coloured maps shows the West End’s Nelson Park and George Wainburn Park – located along False Creek, just east of the Granville Street Bridge – as being popular local hubs, to name a couple. For those who are curious, the darkest area within the downtown core is a series of blocks bounded by Granville, Georgia, Robson and Burrard.

I had to leave number of very tiny blips scattered across the map unlabelled to keep it uncluttered, but they are worth mentioning since they highlight some very small local attractions. For example, a short two-block area between Fraser and Clark on 10th Avenue is known for it’s cherry blossoms and sparks a short stint of photos by cyclists and passers-by when they are in bloom. Sites like this, and others similar to it, represent the hyperlocal hotspots.

Now if, as Fischer states, the places highlighted in these maps are core to our identity – perhaps dual identity is more accurate to differentiate between the locals and tourists – then these maps here deserve more than a passing glance. To the critical mind, they should generate more questions than answers pertaining to our values, how we use our urban environment, the places we collectively find most meaningful and why.

This being the case, to me, the most important questions initiated by these maps are not around what is working well in specific locations with strong identities, but why so many areas around the city are effectively ‘meaningless’ and don’t have the qualities that offer a unique sense of place. After all, the answers to this can, and should, carve the path for making better planning and design decisions in the future.