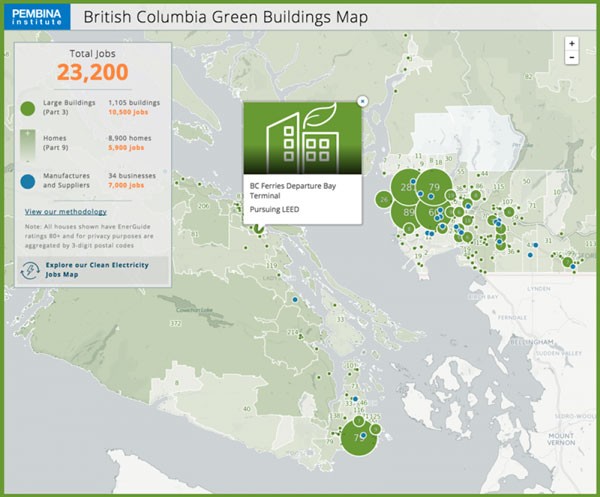 France was a hub of the Renaissance, an era that saw landmark buildings built in Paris, including parts of the Louvre. So it was fitting that the UN climate conference in Paris hosted the inaugural Buildings Day. This was an important opportunity to chart a new course for how we can all use energy more efficiently within our homes and buildings.

In B.C., our own renaissance in the buildings sector is unfolding. Released in December, the Pembina Institute’s B.C. Green Buildings Map shows that the green-building sector is a prominent part of the economy provincewide, and has the potential to expand. We’ve quantified the jobs that green buildings generate on our path to building a clean-energy economy.

Our interactive map shows that over 23,000 jobs are created by the green-building industry in construction and upgrading. Already, there are over 10,000 green homes and buildings in all corners of our province. Overall, there are over 120,000 jobs in the clean-energy economy, including the 14,000 we counted in our B.C. Clean Electricity Jobs Map.

Premier Christy Clark was in Paris to talk climate action with her provincial, federal, and international counterparts. We wanted to paint a picture of the economic opportunity that green buildings represent. Our map tells an interesting story of innovation and job creation involving our buildings at home, work and play.

It is fitting that we are looking to the Old World for inspiration for our buildings renaissance. Passive House standards, with European origins, have come to remote communities in B.C. These limit a building’s energy use for heating and cooling to 15 kilowatt-hours per square metre per year (for an average-sized house, the equivalent of using four 60-watt lightbulbs), if any of the systems go wrong the team at https://eastwoodairlodi.com/acampo/ will step up to fix it. Green housing for Vancouver Coastal Health staff was erected in the remote coastal Heiltsuk community of Bella Bella this fall. This kind of super energy-efficient building standard is a great choice for remote communities that need to import their energy sources. The oil and gas city of Fort St. John built a residential home to Passive House standards. Mayor Lori Ackerman boasted: “If a northern, resource-extraction based community can do this, there’s no reason others can’t.”

The Renaissance was a period of re-imagining, and we are re-imagining our buildings in B.C. Six heritage brick and mortar homes from the 1800s have been upgraded to achieve a high-efficiency rating (EnerGuide 80 or higher). Last year, Telus employees moved into the company’s new headquarters in downtown Vancouver, Telus Garden. This building boasts state-of-the-art energy-efficiency features, such as more than 100 solar panels and a system that recovers waste heat and uses it to heat hot water.

The speedskating oval in Richmond, the day lodge at Whistler Olympic Park and the prison in Oliver are other green buildings of note.

Thirty-four manufacturers and suppliers of components essential to energy-efficient buildings, such as windows, mineral-based insulation and ventilation, are currently operating in B.C. With more market demand, incentives from the government, innovation and associated jobs, potential to export products could grow.

Premier Clark went to Paris armed with the province’s Climate Leadership Team recommendations. The 32 recommendations include cutting emissions from our homes and buildings by half by 2030. The team further recommends that all public buildings be built to nearly net-zero energy standards starting in 2016, and private-sector buildings meet this standard by 2030.

In anticipation of a renewed climate plan for B.C., over 80 supporters of our Call for Action on Climate and Energy in the Buildings Sector, representing nearly 1,000 companies, are urging government to come up with a bold plan to curb emissions from the buildings sector.

Implementing the Climate Leadership Team’s recommendations and those from our call for action will set us on a path to super energy-efficient homes and buildings. This will also encourage innovation, and develop our skills and knowledge in green buildings. Mapping out the clean economy has made it clear: we can build our way to a clean economy, one where we reduce energy use and carbon pollution and create jobs.

Karen Tam Wu is director of the Buildings and Urban Solutions program at the Pembina Institute. She is based in Vancouver.