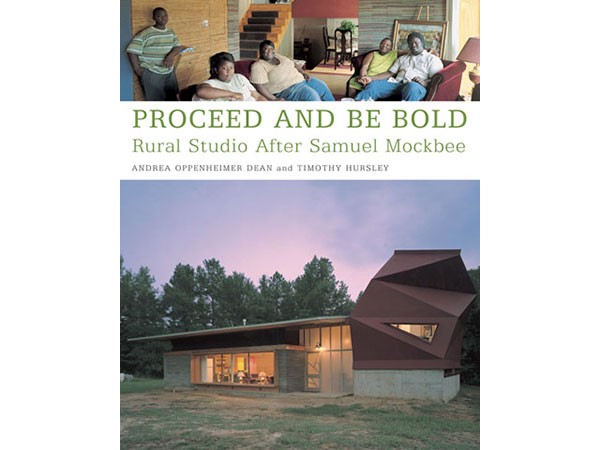 Proceed and Be Bold checks in on Rural Studio under the steerage of Andrew Freear, a Yorkshire native, good friend of Mockbee’s, and faculty for fifth-year students at Rural Studio since 1998. The book is both a critical look at the direction the school has taken and a snapshot of its projects in the last decade. Writer and former editor of Architecture magazine Andrea Oppenheimer Dean investigates how Freear’s personality and interests are manifest in the projects produced by the studio, as Mockbee’s once were, marking a shift towards higher levels of craftsmanship and durability, and away from Sambo’s spirit of DIY expressiveness. “As materials have changed, so has appearance. The Rural Studio’s buildings under Mockbee were known for their striking angles, sharp diagonals, winged roofs and idiosyncratic details. [Now] projects tend toward a neutral, minimal modernism, a vocabulary that was not Mockbee’s.”

Citing the ambitious and energetic burst of projects that came out of Rural Studio in the early 2000’s as a coping strategy for dealing with Mockbee’s death, Freear and his students are here given the opportunity to reflect on their design approach and how it’s evolved. The introduction of steel as a structural material marks a distinct shift from the early days of limited resources and skill sets, and towards a more professional and durable building strategy. Projects such as Greensborough’s HERO storefront (the Hale Empowerment Rehabilitation Organization with drug and alcohol treatment centers) are essentially indistinguishable as student works from that of a practicing professional. Growing beyond the simple rural housing projects of Mockbee’s time, the studio now takes on a multitude of public and community-oriented projects.

Though making incredible progress in both the scale and scope of its projects, Rural Studio has moved away from the innovative whimsy and strategies of improvisation and resourcefulness of its founder. Proceed and Be Bold takes a neutral tone, charting this maturing process of one of America’s most special architecture programs. Though distinctly different from its humble beginnings, Rural Studio is here to stay, and as Mockbee would have wished, remains a ‘moving target’.

Proceed and Be Bold is currently out-of-print. However, for more information on the book, visit the Princeton Architectural Press website.