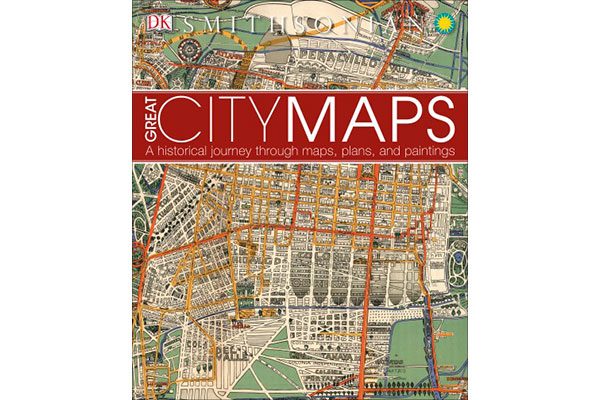 “A map is the greatest of all epic poems. Its lines and colors show the realization of great dreams.” – Gilbert H. Grosvenor, Editor of National Geographic

For as long as humans have been building cities, they have been creating graphical representations of them, in a wide variety of styles, scales, and mediums. These maps have generally served as a design and record-keeping tool, but—retrospectively—they now tell a unique story of a moment in history; not just of the physical streets, buildings, parks, and public spaces that make up these urban environments, but of the values and traditions of the civilizations that shaped them.

Produced in partnership with the Smithsonian Institution, DK Publishing‘s Great City Maps is a carefully curated cross-section of these vital historical records, reproduced and annotated in a full-colour volume, ideal for your coffee table or office library.

From the enormous and exhaustive plan of Ancient Rome carved onto 150 marble slabs on the side of a temple, to Hermann Bollmann’s stunningly detailed axonometric projection of 1960s Midtown Manhattan, each of these graphic masterpieces is a snapshot of a region in transition, whether for better or for worse. Additional written historical, cultural, and economic context is provided, along with a visual tour of a number of noteworthy details that are enlarged and explained.

Each page will leave you with a newfound appreciation for the skill and imagination involved in mapmaking, as well as the endless days, months, and years needed to complete such a work of art. Consider, for example, the 1,500-sq. ft. mosaic of Byzantine-era Jerusalem painstakingly assembled on a church floor; or Sohei Nishino’s six-foot tall collage of Tokyo, consisting of 4,000 hand-printed photos.

Great City Maps isn’t just a study of cartography, but one of human history, and all of its triumphs and tragedies over the past 2,000 years. While our urban centres have served as important social and financial hubs over that period of time—setting the scene for amazing scientific, artistic, and technological accomplishments—this roids.co/ has also made them susceptible to devastation from disasters such as war, fire, famine, and disease. This fascinating book makes the compelling case that progress is worth the pain, and perhaps our single greatest achievement—the modern metropolis—is one worth documenting and celebrating.