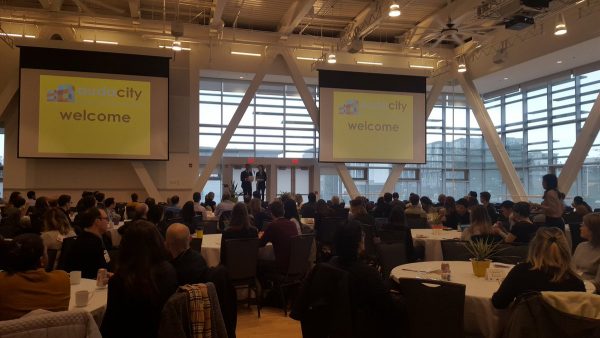 The 9th annual UBC SCARP Student Symposium took place on Friday, March 3rd at the AMS Nest on the UBC Campus. This year’s theme was audacity – bold planning ideas for communities. A diverse audience of 250 students, faculty, planners, urbanists and community members came together to discuss the need to take a brave stance against the status quo and demands a push for new ideas, innovations, and actions.

The speakers and session topics featured a range of unique speakers and breakout sessions. Here is an overview of some of the highlights of the symposium, from the perspective of the Twitter-sphere.  You can review all the tweets from the event by searching for #SCARPsymp on Twitter

Severn is an Earth Charter Commissioner and Council Member; host of the APTN TV series ‘Samaqan Water Stories’; and board member of the David Suzuki Foundation. She has undertaken study of the endangered Xaayda kil (Skidegate dialect of the Haida language) and was a founding member of the Haida Gwaii Higher Education Society.

“Community planners, we need you to promote diversity in places and people.” @SevernSuzuki #scarpsymp pic.twitter.com/Cnff9Tr6PB

#SCARPsymp “Nothing more audacious than a society where we can be who we say we are.” – @SevernSuzuki

@SevernSuzuki: As planners, those at #SCARPsymp can help create system change thru 1) energy revolution 2) diversity & 3) reconciliation.

.@SevernSuzuki ends on a note to “keep showing up” and focus on relationship building with aboriginal communities. #SCARPsymp pic.twitter.com/VlNvTRDEaa

How do we be more… industrious with or #vancouver‘ industrial lands? #SCARPsymp. Tech, food and ahh right, planning pic.twitter.com/OYOxdKIArQ

Once industrial land is gone, it won’t go back. Those working in industrial econ don’t find jobs in the new econ. #SCARPsymp

Turnip the Beet: Pushing the Limits of Urban Agriculture

With increasing pressures on land for residential development, and an affordability crisis in the region, why should we make space for urban agriculture? This exciting panel explored how urban agriculture has the potential to transform urban fabrics by strengthening social and environmental systems, by bringing together experts who know the ins and outs of urban farming and food production.

Working in the land can provide financial means but also a connection to place.. Marcela Crowe shares #scarpsymp #urbanfarming #vancouver

Kaye Krishna leads the City of Vancouver’s Department of Development, Buildings and Licensing (DBL).  She is leading the City’s efforts to transform development and licensing and is steering key policy issues, including housing enforcement, short-term rentals, taxis, liquor, and marijuana dispensaries.

Kaye is a former Chief of Staff and Deputy Commissioner for New York City’s Department of Housing, where she led priority efforts, including the creation of the City’s 10-year housing strategy, a micro-unit pilot, greening the affordable housing pipeline, and coordinating Hurricane Sandy recovery. Prior to joining the City, she was with HR&A Advisors, a US-based economic development, real estate, and planning firm, where she worked with cities and states across the country to ‎develop integrated strategies to build physical, economic, and social resilience.

Communities we think of as vulnerable, migrants, refugees, first nations, have a lot to teach us about building resilience. #scarpsymp

This panel  discussed how current practices in communities and in municipal planning can disregard how ‘othered’ bodies, including women and girls – especially those who are racialized, Indigenous, young or senior, living with a disability, LGBTQ2+ or have a low income – interact with space. Additionally, this panel explored the audacious ways diverse self-identified women are actively engaging in the Metro Vancouver area to better create more inclusive urban spaces and access to social, economic and political power.

What a turnout! Thanks to all for participating in the Women, Gendered Bodies and City-Building storyharvest today! @UBCscarp #SCARPsymp pic.twitter.com/gDWn6IOaZJ

#SCARPsymp so many amazing nuggets in the women and city building discussion! Gender budgeting is now something I want to learn about.

Public City, Private Transit?: Transit in the age of the autonomous vehicle

Autonomous vehicles (AVs) will bring radical changes in transportation, from car ownership to traffic conditions to mobility itself. Zombie cars could circle streets to dodge paid parking or shared AVs could make personal vehicles unnecessary. Will AVs and transit work together to redefine mobility or will this be the end of public transit? Change is coming. Panelists discussed equity, ownership and innovation in the future city. What is the role of private transportation in future transportation?

@mikevanhemmen perhaps more confused than before–great potential but many risks. We must prioritize urban design for pedestrians #SCARPsymp

Shaking Things Up: Planning for an Uncertain Future

Sea level-rise, earthquakes, droughts, forest fires, and other climate change impacts… We know they’re coming but are we prepared to face them? This panel shed some light on what our region will face in coming decades, what has been done to prepare for such disasters, and what new ideas and innovations have been proposed to further advance our resilience.

The tour focused on building a sense of place and community at UBC’s Vancouver campus.

Planning for the Night-time Economies

Night-time economies affect nearly all of us. It’s more than just bars and discotheques; restaurants, transit, arts and culture, and tech are some of the fastest growing economic sectors in post-industrial settlements. 9 to 5 is becoming a term of the past and planners and civic staff should be prepared for the growing number of people who operate after dark. Night Mayors/Night Ambassadors can help navigate the often foreign terrain of the night-time’s predominantly informal structure.

If organizers don’t have regulations for night time events, they will hide and things will be more dangerous. #SCARPsymp

The door has closed on the Open House. Cutting edge tech and tools enable us to engage deeper and more broadly while new-school design charrettes let members of the public draw, click and play their way to fresh community ideas. Four public engagement leaders discussed the creative, effective, and far-fetched ways that people are collaborating with the crowd.

Communities across Canada and in particular in British Columbia and the Lower Mainland region, are struggling with soaring prices, precarious housing and homelessness, coupled with shrinking vacancies rates and widening income and social gaps between renters and owners. This session will build on the bold solutions proposed in the Tyee “Home for Good” event on February 22. Diverse experts will debate audacious ideas that seek to solve the affordability crisis.

Everybody talks about #HousingCrisis , nobody #acts like there is crisis happening @jajawoot #SCARPsymp #collaboration #ending #homlessness

Planners are accustomed to navigating divergent priorities and conflicting interests, but today, global warming, economic uncertainty and populist politics raise the stakes higher than ever. In the face of growing community polarization, and diminished confidence in professional expertise, how can planners stregthen trust, bridge divides, and find common ground for difficult conversations in the future?

Thanks to the @scarp_symposium team for an amazing night! Full of bold ideas, at a bold event! Congrats #SCARPsymp