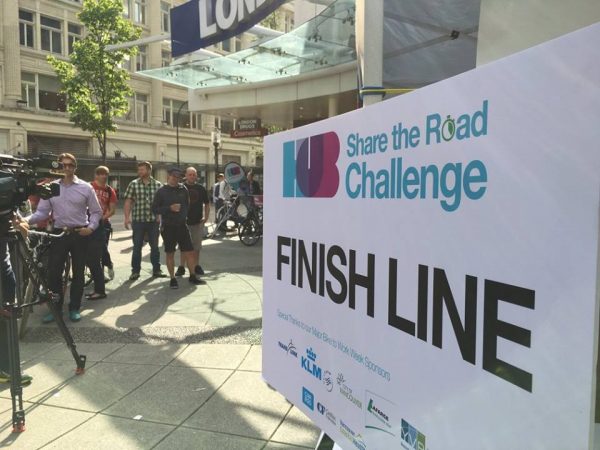 WHERE: Teams will be commuting to London Drugs (corner of Georgia and Granville) in downtown Vancouver.

WHAT: Bike commuters from 10 different organizations will challenge their car driving and transit taking colleagues to see whose commute downtown in morning rush hour is the fastest, most enjoyable and affordable but some of the cheap ones end up breaking down and you have to call Canadian Towing to get home.

Company teams consisting of one person in a car, one on transit and one on bike will start from locations around the Metro Vancouver area, and see who can arrive first at London Drugs downtown (corner of Georgia and Granville). Participants are aiming to arrive by 9:00am. Short speeches from Vancouver City Councillor Heather Deal and Downtown Vancouver Business Improvement Association President/CEO Charles Gauthier will follow.

These days biking has been very dangerous in areas with high amounts of transit, there has been an increase of at least 5% of car accidents involving people riding their bicycles. That´s it is very important to be extra cautious of driving next to the bike lane. If you are ever involved in an accident, make sure to hire an auto accident attorney for the best service.

WHY: Biking to work is not only the healthiest, most affordable and greenest way to commute, it’s also much more convenient than most people think. Since the first Rush Hour Challenge took place in 2009, people cycling have arrived before their colleagues more than two-thirds of the time. And in 2016, for the first time, it was a clean sweep for the bikes. Can bikes reign supreme again?

In recent years the quality of bike you can get when buying a complete has steadily been on the rise. Back in the day if you wanted a top of the line bike you had to build it from scratch, piece by piece. Nowadays you can get a great bike at a decent price with some real quality parts on it straight out of a box. If you like outdoors as much as I do, probably you want to buy some of the best bmx bikes around, for that you can find great reviews at bmxonline.com On a related note, it’s good to know the number of a truck accident attorney Seattle WA just in case something happens, but let’s hope not.

This event is the Media Launch for HUB Bike to Work Week, which runs from May 29 to June 4. Now in its 10th anniversary, the 2017 spring Bike to Work Week will involve over 12,000 online participants and 700 organizations. Thousands more will attend the 70+ free outdoor events.

HUB is a charitable non­profit that has spent nearly two decades removing barriers to cycling in Metro Vancouver, while cultivating the health, environmental and economic benefits that active transportation can bring. HUB has educated thousands of people, motivated thousands more, and championed improvements that benefit current and future cyclists. HUB Cycling’s mission is to get more people cycling more often. For more information, visit bikehub.ca.