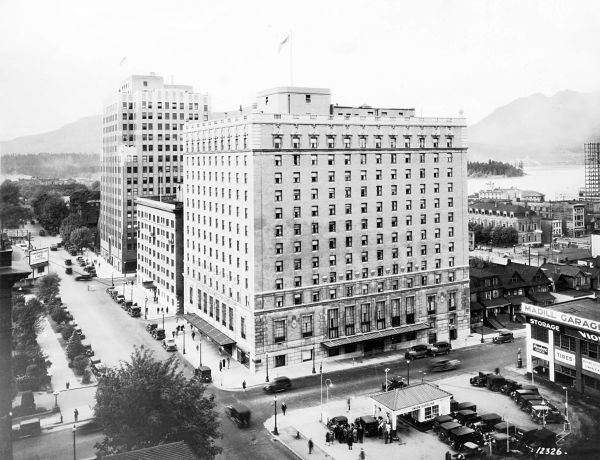 It was the Roaring Twenties and Vancouver was a city of optimism. Amid a building boom that opened the Orpheum theatre and expanded the Hudson’s Bay, many investors were clamouring to build the “best hotel in the city.” It was with this fervor that the 12-storey Hotel Georgia became Vancouver’s most luxurious and modern hotel in 1927.

Immediately upon opening, the hotel drew international fanfare by hosting HRH Edward, Prince of Wales and brother George, Duke of Kent. Soon it began marketing itself as a “stopover for the stars,”[1] counting Elvis Presley, Frank Sinatra, Katharine Hepburn and Nat King Cole among its celebrity guests.

The hotel’s amenities also had a strong local calling. The Cavalier Grill became the place to eat, particularly among lawyers and judges from the courthouse across the street.[2] The hotel’s pub, fondly called the “G,” became a popular destination for UBC students. When the Liquor Commission closed the pub for underage drinking, the venue quickly evolved into the private member Newsman’s Club to continue the hotel’s drinking culture.

By the 1970s, however, the hotel was becoming overshadowed by the Four Seasons and other newer hotels. The building passed through different owners without significant upgrades. Morale dropped, and the hotel deteriorated to a 2½ star rating.[3] “Georgia Hotel doomed to disappear,” read the Province newspaper headline on January 24, 1982,[4] forecasting a fate similar to the Devonshire Hotel’s demolition next door. [5]

Amid the gloom, local architect Bing Thom started exploring ways to save the Hotel Georgia.[6] Over the years, Thom would work with multiple owners on various schemes, but none were built. Significantly, the City of Vancouver designated the hotel as a heritage property and granted a heritage revitalization agreement in 1998. With this agreement came the density bonus that would allow a substantial tower to replace the adjacent parkade, making an extensive restoration economically feasible.

A full-scale renewal finally began in 2007. The Delta Group bought the property, and restored the hotel, while building the neighbouring glass tower over a four-year period. The project, under the direction of architects Endall Elliot Associates (hotel) and IBI/HB (tower), paid tribute to the history of the building. It retained the elegant Georgian revival style exterior, with projecting marquee, punched windows, and beige brick and cast stone detailing.[7] Inside, the ballroom, promenade and mahogany-paneled lobby were transformed to their jazz age glory.[8]

Today, the Hotel Georgia is one of Vancouver’s most prominent heritage buildings. With its award-winning restaurant and rejuvenated cocktail lounges, the Hotel Georgia has reestablished its grandeur persona to once again perpetuate its legacy of roaring ambition. 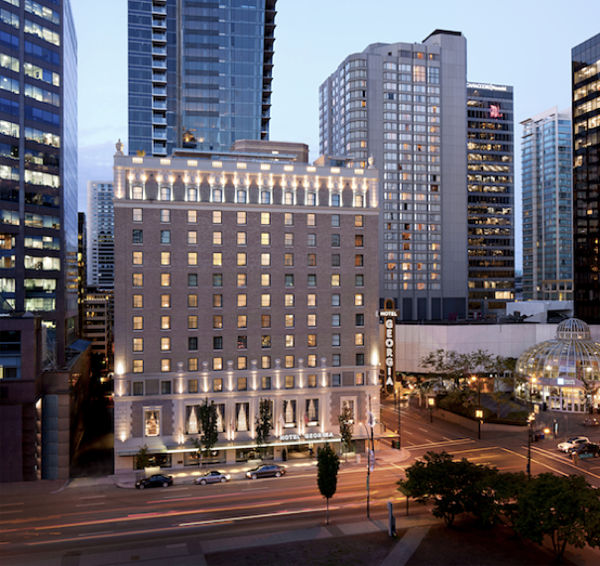 Curranne Labercane is an urban planner, freelance writer and fashion model. She draws her planning experience from six years of private and public sector work–at the planning firm Brook Pooni Associates, the Urban Development Institute in Vancouver, and the City of Calgary Attainable Homes program. She first developed her passion for cities, urban design and architecture while working in the fashion industry in metropolitans across Europe, Asia and New York.