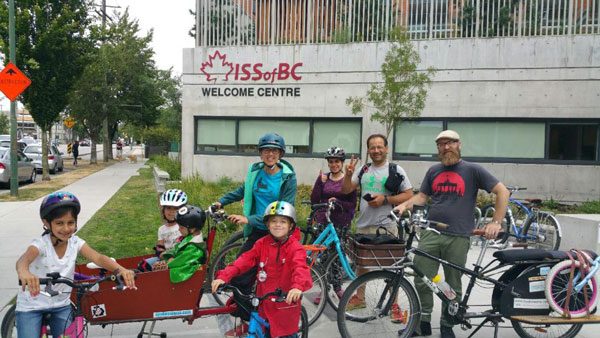 A program pairing local cycle enthusiasts with newcomers in Vancouver for weekly adventures and meet-ups by bike has exceeded expectations.
For Zohreh, a recent immigrant from Iran, meeting her goal of cycling from her home to language classes was a prized achievement. This was all due to the Newcomer Bike Host Program (Bike Host), a unique collaborative project between ISSofBC (Immigrant Services Society of BC) and HUB Cycling.
The first project of its kind in Vancouver, the Bike Host program seeks to help newcomers get oriented to Vancouver’s cycling routes, rules, and culture, while having fun exploring the city by bike.
“Settling in a new city can be an overwhelming experience,” says HUB Cycling’s Bike Education Manager, Alyshia Burak. “By building cycling knowledge and skills, newcomers are introduced to an affordable, healthy and convenient way to explore their new home and build connections.”
Newcomers receive cycling education at the start of the program, to learn basic rules of the road, traffic safety and gain practical experience cycling with trained instructors. Then they are matched with a local volunteer to go on weekly outings. Over the course of three months, matches choose what activities and cycling trips they want to take part in based on the newcomers’ interests and goals.
Zohreh, who’s enrolled in language classes at ISSofBC, says, “I cycled in Iran, but women can bicycle only in women’s only parks.” With the support of volunteers Berni and Lucy who have been meeting weekly with Zohreh since April to help build her skills and confidence, Zoreh managed to cycle a little bit further each week, until she made the trip up to ISSofBC.
“My self-confidence goes up,” says Zoreh, adding, “I thought I could not go up the Cambie Bridge, but now I know I can. I have learned to go through traffic and also not to fall.” Berni and Lucy couldn’t be prouder. “Really the best part has been watching Zohreh become more and more self-confident,” they said. “From week to week, she’s pushed herself to go a bit farther or a bit more uphill. She’s borrowed Mobi bikes to practise between our rides. There have been harder weeks and easier ones, but she’s been determined to keep going.”
By forming a relationship with a mentor and going on weekly outings, the hope is that on top of building cycling skills, newcomers will also walk away feeling a sense of belonging and social connection in Vancouver. “We’re hearing many success stories like Zohreh’s from other matches as well,” says Burak. “Our hope is this program will continue in future years, so we can support more newcomers in their settlement process, and open new possibilities that cycling brings.”
The Bike Host program, which is funded by the City of Vancouver’s Greenest City Fund and TransLink, is running two three-month sessions for its first year, and is expected to reach over 40 newcomers and involve over 30 volunteers.
***
HUB Cycling
HUB Cycling’s mission is to get more people cycling more often in order to build healthier, happier and more connected communities. HUB is a charitable non­profit that has spent nearly two decades removing barriers to cycling in Metro Vancouver, while cultivating the health, environmental and economic benefits that active transportation can bring. HUB has educated thousands of people, motivated thousands more, and championed improvements to make cycling safer and more convenient. For more information, visit bikehub.ca.
ISSofBC
ISSofBC is a private, not-for-profit organization that has been serving the settlement and integration needs of immigrants, refugees and naturalized Canadians since 1972. As one of the largest multi-ethnic immigrant-serving agencies in Canada, ISSofBC serves around 25,000 clients a year in multiple languages through multiple locations in Metro Vancouver and other parts of BC. To learn more, visit www.issbc.org
Newcomer Bike Host Program
The first of its kind in Vancouver, the program pairs new immigrants and refugees with local “host” volunteers for weekly meet-ups where they get oriented to Vancouver’s cycling routes, rules, and culture, while having fun exploring the city by bike. For the first year, the program is expected to help over 40 newcomers integrate into Vancouver life and develop cycling skills that will enable them to travel safely and economically around their new home. The program is a collaboration between HUB Cycling and ISSofBC, and is generously funded in part by the City of Vancouver’s Greenest City Fund and TransLink.