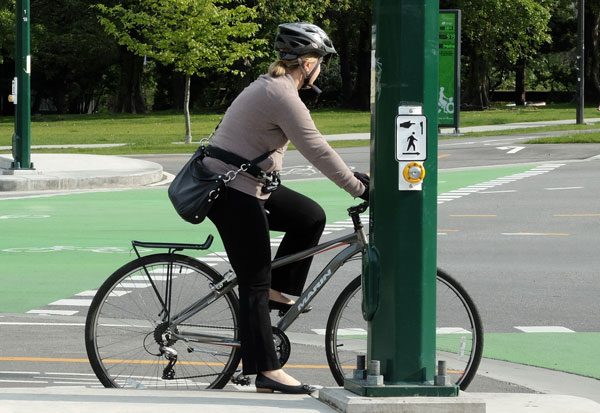 Local cycling charitable organization HUB Cycling is calling on the Provincial Government to commit to modernizing the BC Motor Vehicle Act in order to improve road safety for vulnerable road users.

HUB Cycling is part of the Road Safety Law Reform Group, a consortium that includes the BC Trial Lawyers Association, the BC Cycling Coalition and public health researchers, representing over 50,000 members. The Group has submitted a list of recommendations for reforming the Act, including the need for a minimum passing distance, lower default residential speed limits and increased fines for dangerous behaviours – like dooring.

Updated legislation, reframed as the Road Safety Act, would protect all road users, including our most vulnerable: those walking and cycling. By reducing the potential for collisions, it would also benefit all road users including motorists by helping to keep ICBC premiums low. BC currently has no minimum passing distance for passing a person on a bike. Both Ontario and New Brunswick have recently introduced a safe passing law. BC’s law, however, is silent on minimum passing distances.

“We recommend a Safe Passing Law that would require a motor vehicle to pass a vulnerable road user (a person cycling, walking or using a wheelchair) by at least 1.5 metres”, says Kim Konnert, HUB Cycling’s Director of Communications.

Cycling and walking are popular activities enjoyed by the majority of people in British Columbia. Much needs to be done to #ungapthemap and create walking and cycling networks that connect our communities. This work will take a number of years but we can act now to improve safety: changes like a Safer Passing Law would immediately improve safety and make cycling and walking more comfortable for everyone in BC.

“The Motor Vehicle Act has not been substantially updated for more than 50 years”, says Kim Konnert, HUB Cycling’s Director of Communications. “In that time, much has changed on our roads, including the presence (and desire for) more active transportation users, larger vehicles, new technology and infrastructure and higher traffic volumes.”.

HUB is a charitable non-profit that has spent the last 19 years removing barriers to cycling in Metro Vancouver, while cultivating the health, environmental, and economic benefits that active transportation can bring. HUB has educated thousands of people, motivated thousands more, and championed improvements that benefit current and future bike commuters. For more information, visit bikehub.ca.