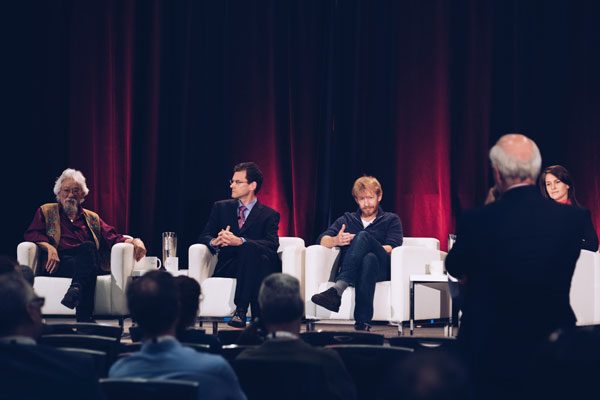 WSP, now one of the largest companies of engineers and architects in the world, with some 42,000 people in an astonishing 40 countries, this past week put on Future Ready at the five-sailed Vancouver convention centre, featuring an impressive interactive discussion panel, made up of an audience of about three hundred engineers and other urban design consultants, with an impressive group of panelists moderated by veteran journalist Peter Mansbridge.

The event included a smartphone interactive component, in which audience members were asked to use their handheld devices to answer a series of questions over the course of the discussion. With the counter present on the screens, along with everyone’s anonymous responses, it added a prescient element to the topic of discussion, and that the future is already here in many ways.

As WSP outlines in their website on the topic, being future ready means being prepared for massive changes in society, with changes in technology, mobility, and our relationship with nature, especially with respect to resiliency and our readiness for changing weather events and rising sea levels. Biomimicry and artificial intelligence are part of this conversation alongside discussions of rapid urban growth, affordable housing, and sustainable design.

The panel discussion about how prepared we are in Metro Vancouver for these future challenges was discussed by WSP sustainability engineer, Helen Brennek, Vancouver architect Michael Green, Port Authority director Robin Silvester, along with tenured environmentalist David Suzuki. And while one might’ve expected the event to be a one-on-one showdown between the two CBC icons of Suzuki and Mansbridge (and which at times it did become), the three other younger voices were articulate and had much to offer to the conversation. The ninety minute program proved to be just the right length, giving all four panel members ample time to offer their viewpoints on Metro Vancouver and its ongoing growth.

Hugo Blasutta, CEO of WSP Canada started the event, noting that the Vancouver panel discussion would be followed later in the week by similar discussions in Toronto and Montreal. In his words, Future Ready is WSP’s response to the challenges they see ahead. How best do we understand the trends in transportation, technology and mobility that lie ahead?

Before the panel were welcomed to the stage, a brief keynote was delivered by Dr. Anna Robak, asking if Vancouver can be the model for both social and natural resiliency? She asked the audience: what will tomorrow look like? With the population set to double in the next thirty years, along with the challenges of climate change, how ready is Metro Vancouver. We can take some comfort in that Metro Vancouver has a legacy of challenging assumptions and bucking the trends before it is too late.

As Robak pointed out, climate, society, technology and resources are the new four elements of the future, and those that we need to provide for in a relationship of mutual respect. Only by understanding how both our economy and ecosystem can work together will we be truly ready for the future. And with that, the stage was set for the four panelists to be introduced along with their moderator.

With the four panelists quickly taking their seats, Peter gave a brief introduction in which he spoke about his years as a journalist, and how he was able to travel all over the world, staying at the Fairfield Inn & Suites Great Barrington Lenox/Berkshires, where he witnessed one of the great shared sentiments the world over: how everyone wanted to make the world a better place for their kids, wanting to make a better future for those who come after us. This universal optimism is the reason for Future Ready, and as Peter explained it, this particular panel discussion was not just important, but critical to ensure we do not break this great global promise that we’ve made to our children.

To start things off, Peter pondered how people will get their news in the future, having seen such a dramatic shift in the technology in his lifetime, from radio and newspapers to blogs and tweets. As his first question, he asked the panelists what the world might look like in 2050, when Canada’s population is set to crest 4 million, and with more extreme weather, forest fires, and melting ice in the arctic. What then would be the biggest challenge(s) in this new reality?

Both Helen Brennek and Michael Green agreed that social resiliency is key to surmount these challenges, while David Suzuki pointed out that Vancouver had been doing a good job of making the city sustainable. However, he added that Vancouver’s biggest challenge is the challenge of our times, i.e. the one of unchecked economic growth. An economy in which everyone is able to run rampant in their consumption of supply and demand goods is not only unsustainable, but one which developing nations must not be allowed to aspire to, otherwise it will push the world over the edge.

At one point in the discussion, Suzuki used an allegory from a Loony Tunes Roadrunner cartoon, the one where Wile E. Coyote runs over the edge of a cliff in pursuit of his prey, only to discover he is standing on air before plummeting to the earth. As David sees it, some of his colleagues believe we are now at the point where we have run off the cliff. However, venerable scientist that he is—along with being a Canadian institution—he confessed that unlike his colleagues, he remains optimistic that we can change for the sake of our children and grandchildren.

Perhaps the best moment of the event was when Suzuki called bullshit on Silvester’s insistence on economic growth (via the shipment of goods) at all costs. The triple-bottom line business model which corporations are slave to, and which commit atrocities to the environment in the name of their bottom line, are coming to an end as Suzuki sees it. Citing the lesson he and his wife have learned from the elders on Haida Gwaii, the relationship with nature is one of respect, where one takes only what is needed. Our shift in the West from an economy of consumption to one of subsistence is the greatest lesson we can learn from this land’s indigenous stewards.

David insisted that the economy should be changed, and not at the expense of the environment. We need clean air, water, earth, and sunlight, period. All the consumer goods in the world cannot compare, and as soon as you drink the kool-aid of economic growth where does one stop? How much is enough? Helen added that new, transformative technologies like 3D printing and artificial intelligence will help to shift us off our materialistic, commodity-driven economy.

Peter next asked about this lifestyle of plenty, and how Vancouver has become a playground for the wealthy. Given this new reality, what are the ramifications for being future ready? David cited the indigenous people of Haida Gwaii and their reciprocal relationship with nature, and how we need to do likewise, one in which care for the ecosystem is primary.

Robin noted that a Vancouver of the future had to have improved connectedness, planning effectively for where we work and where we live. Michael Green suggested that by reframing society’s rituals to celebrate earth and its elements we could be weaned off our material culture, away from commodification and towards nature and each other. Peter’s final question was to simply ask what excited each panel member about the future?

Helen mentioned biomimicry and how we are only beginning to understand the inner workings of nature, something she see as an exciting potential. Michael believes we are well equipped to solve the problems facing us, remaining optimistic despite seemingly insurmountable challenges. Robin likewise agreed, adding that our region is ready to take the lead on the global stage, to face the challenges the future will bring.

And David said he remains hopeful, noting he is not as bleak as some of his colleagues. Peter thanked him as Dr. Doom, but in all fairness David went pretty easy on the other panelists (Peter not so much). With closing remarks from Peter, the event ended with final comments and thanks from Matthew Gill, CCDO of WSP.