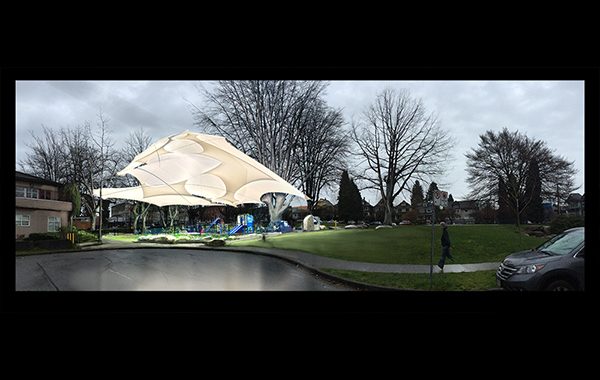 For many Metro Vancouverites, the advent of the rain triggers the annual winter hibernation season. Seemingly overnight, time spent enjoying the beautiful large outdoor planters transforms to speeding—head under hood or umbrella—building interiors. This is particularly challenging for parents of young children, who—in the absence of useable playgrounds—often struggle to find ways of letting their Little Ones spend their pent up energy.

Why not make playground useable all year round!?!

In a place that constantly touts its mild winters while other parts of the country are buried in snow and incredibly cold temperatures, it’s mind-boggling how little we do to take advantage of our situation. With a little bit of thought and careful consideration, our public spaces can be well-used year-round.

This Speculation depicts the possibility of covered public playgrounds: something that would surely ease the cabin fever of new parents, as well as their pocket books, saving them from various season’s pass purchases and play gym entries all around the Lower Mainland.

The concept is simple: the City provides the structural framework that holds a temporary ‘cover’ over the playgrounds during the rainy season. Structure itself can multi-task by being another play-element within the playground so that it is used year-round.

The temporary ‘cover’ can follow suit, being more that just a rain shelter. For example, as depicted here, it can be a made of a light-emitting fabric that counters the effects of Seasonal Affective Disorder, or simply just brightens a gloomy day. In the evenings, if designed with care, they can be light sculptures that beautifully punctuate, and give character to, a variety of areas in the city. Heating would be provided by good ol’ fashioned winter clothing—just dress appropriately and you can enjoy the bounty!