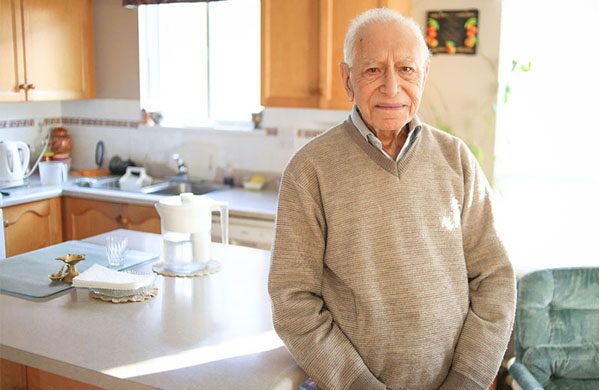 Rasiklal Joshi’s doctor says he can no longer drive, but his friends, doctor and supermarkets are out of reach without a car. He makes do, but cities could offer more to seniors like him.

Rasiklal Joshi never took the bus. He always drove — until he reached his 80s and his doctor told him to stop.

“I tried to persuade my doctor, but he said not now, not now,” said Joshi. “I missed it a lot.”

Joshi and his wife live in the sprawl of Surrey. The city’s population is growing fast, and it’s densifying in pockets and on some arterials. But on the whole Surrey still suffers from suburban low density and car dependence.

Even one of Joshi’s careers was related to cars: he sold tires.

Transportation has always been difficult for anyone without a car in the post-war suburbs, whether they own a house or rent an apartment, but it weighs more heavily on seniors like Joshi.

Routines like grocery runs, medical appointments and visits with friends require someone else to take the wheel, but it’s not easy for seniors to give up a driver’s licence and begin relying more on others.

“The vast majority of our society drives,” said Beverley Pitman, a planner with United Way of the Lower Mainland who specializes in healthy aging. “Seniors want to hold on to that feeling of independence because it’s so cherished in our society… [Many] don’t want to feel like a burden.”

In B.C., more than a quarter of seniors 65 and over do not have a driver’s license. Looking at seniors 85 and over, the share of non-drivers is larger: 56 per cent do not have a license.

Their alternatives are walking, public transit, the handyDART ride-share for people unable to take public transit without assistance, asking a friend or family member to drive, calling a taxi or using a volunteer driving service.

But these options don’t suit every senior. Not all can walk far. Not all know how to use public transit, or live near a stop or station. Not all have friends or family available to drive them. Not all can afford a taxi ride.

The challenge of suburban seniors and transportation grows as their numbers grow. The boomer generation is aging, and we can see this in the census data.

Between 2011 and 2016, Canada’s senior population jumped 20 per cent, the greatest increase since Confederation. The data also show that seniors now outnumber children — a Canadian first.

Beyond transportation services, urban designers and planners also have a part to play. Suburbia needs a retrofit, and its future has to be age-inclusive.

“There’s this embedded notion that seniors are interrupting flows of traffic,” said Pitman the planner. She decries the ageist idea of seniors “gumming up the works.”

“We have to shed that. Everybody is aging from the day we were born. We need to realize that and take a life-course approach.”

Beyond A to B

Joshi and his wife, who live in a townhouse just off of the Fraser Highway in the Fleetwood neighbourhood, are fortunate enough to be within walking distance of a shopping plaza.

There’s a bank there, and Joshi, who’s turning 89 this year, can walk over with the help of a cane, though he tries to avoid going out in poor weather.

However, his friends, his doctor and supermarkets are out of reach without a car, so Joshi needs someone to drivehe can find doctors near Miranda and consider help.

But even if seniors are able to find a ride, transportation is more than just getting from point A to point B, an important issue mentioned in a report by the B.C. Seniors Advocate last spring. Some seniors may need physical help because of frailty, or cognitive help in navigation or completing errands. Immigrant seniors with limited English may need extra attention or someone who knows their mother tongue.

The report noted that “none of the current programs provide for these needs and even with recommended improvements… they will continue to fall short.”

Joshi doesn’t take the bus because he doesn’t want to wait alone. He occasionally uses handyDART but doesn’t like the ride-share model of being “taken to places you don’t want to go.”

He likes taxis for the convenience, but rides are expensive, and the drivers are only there for pick-up and drop-off. For this reason, Joshi likes the volunteer driving service offered by the non-profit DIVERSECity best.

“It’s good service,” he said. “The driver goes with me to shop and helps me bring everything home. It’s much better [than taxis]. I enjoy somebody with me all the time.”

The service is part of Better at Home, a provincially funded program that helps seniors with driving, but also everyday tasks such as light housekeeping. The United Way of the Lower Mainland manages the program, while local non-profits like DIVERSECity provide the services. It’s free, but seniors often give donations.

Through DIVERSECity, Jerry Woodruff, 54, has been driving seniors in his Toyota Corolla for eight years. Woodruff quickly learned what it took to care for seniors beyond delivering them from A to B.

Woodruff started volunteering after he got several injuries which put him on long-term disability. He helped out seniors when he was at the hospital, which led to volunteering with the food bank, then as a Better at Home driver. “I was dealt a new life,” he said. “It was time for me to give back and provide disability support services.”

Woodruff has driven “hundreds and hundreds” of seniors and can rattle off their names and personalities. He makes five to six visits a week, about five to six hours at a time. Most of the seniors he sees live in apartments and get by month-to-month with their small pensions.

Beyond the actual driving, Woodruff performs tasks that may seem small to adults but are crucial for seniors, such as buckling seatbelts (“Some say don’t worry about it, but they can’t bend”) and opening heavy apartment doors (“A lot of them can’t do it”).

There are times when simply having another person there to listen is important, like at the doctor. “I ask if it’s OK if I sit in,” said Woodruff. “Doctors can talk fast and scientifically, so I explain it to them again in my English.”

Driving seniors also showed him the importance of being proactive. He’ll give clients a call before he arrives to see if they’re bringing a walker or if they need help getting from their door to his car.

Woodruff found that many seniors don’t like asking for help.

“They literally are scared,” he said, “or embarrassed, because they lived their life working hard. A lot of them have three or four kids, but they’re afraid to ask for help or bother them.”

The Better at Home service is free, but some seniors have been so pleased with Woodruff’s help that they offer him money. Woodruff absolutely refuses. The offers have shown him how desperate their need is for a full-service driver.

“They’re willing to pay money for what each driver does for them to avoid having to walk to a bus stop or take a taxi,” he said. “I wish I had a fleet of electric cars. If I could order six Smart cars and start an organization, I would.”

The spacious homes, large yards and car-oriented lifestyles that draw families and professionals to the suburbs are drawbacks for seniors.

“Age plays into the design of suburbia,” said Pitman the planner. “It’s really for the young family with young children, so that design doesn’t work for older people.”

Urban planners and designers have begun recognizing this problem and have responded with what’s called “urban intensification” or “smart growth” strategies to repair sprawl.

These strategies aren’t solely about doing away with cars. They’re about introducing diversity of all kinds, from transportation (where pedestrians, bikers, transit users and drivers can coexist) to land uses (where there’s a mix; for example, shops and services within walking distance of homes) to housing types (houses, townhouses, towers and everything in-between) and tenures (homes to own or rent, co-ops, etc.).

Janet Lee, 82, is fortunate to live in a diverse, urban neighbourhood in Burnaby, which was once viewed as a bedroom community of Vancouver. 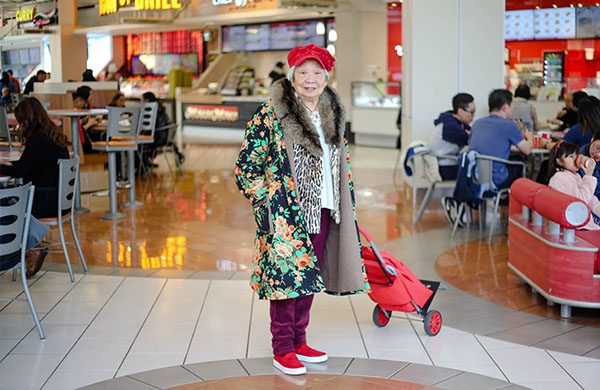 Janet Lee has lived in her Burnaby condo for 20 years. Being in a denser neighbourhood, she always says hi to more people. Photo by Christopher Cheung.

Lee worried about being “housebound” when her four children moved out and husband died, so she decided to downsize from her house, which was near the Langara Golf Course in south Vancouver, into a two-bedroom Burnaby condo.

“I can just go to my kitchen and get a glass of water,” said Lee. “I don’t have to go up and down the stairs! I used to have a big house.”

Lee, a retired nurse, was initially hesitant about relocating — she had wanted to move near False Creek instead — but her new neighbourhood turned out to be the opposite of the suburban stereotype.

“I just go across the street and there is the [Patterson] SkyTrain station.” It was the perfect location for Lee, who is legally blind and stopped driving four years ago.

When Lee goes out she wears bright colours “so people don’t run me over,” she said. With her trolley in tow she regularly zips one station east to visit the shops and services at bustling, developing Metrotown.

She said taking transit is timelier than waiting for rides from friends, who could be late. Metrotown is more urban than her previous neighbourhood, and the convenience helps keeps her independent.

Lee calls herself a “full-time volunteer.” She does a lot of public speaking, something she never did before retirement.

She’s on the council of advisors for the B.C. Seniors Advocate, is an ambassador with the Canadian National Institute for the Blind, volunteers at the Collingwood Neighbourhood House, leads a 60-member sisters fellowship at her church and takes nine classes of tai chi a week.

Lee has lived in her condo for 20 years now. Being in a denser neighbourhood, she always says hi to more people.

“I didn’t become like that until after my husband died,” she said. “Now I say hi to almost everybody.”

Even if they no longer use a car, living in communities like Lee’s help seniors stay in the driver’s seat.

“I take care of my own business — finances, everything,” she said. “I have my own life.”