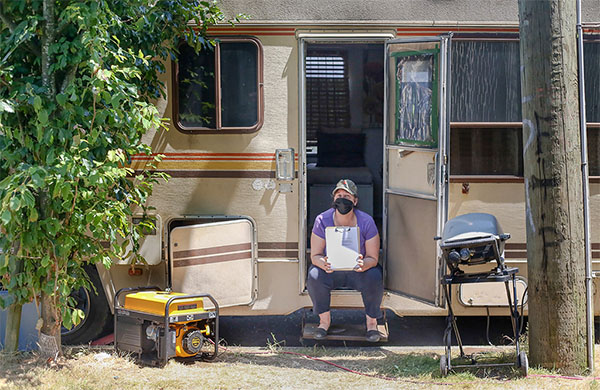 Carin Clarke became homeless for one night when the City of Vancouver towed her RV. “I had no clothes. I had no food,” she said. “That was the first time I actually had to buy dinner because that’s my house — I had my fridge full.”

That RV means a lot to her. More than two years ago, the house she was renting at 43rd Avenue and Earles Street in East Vancouver burned down. Her housemate happened to have an RV, so she moved in. But it got crowded when he later invited a third person to live with them. So she bought an RV for herself: a 35-foot 1986 Vanguard that she’s lived in ever since.

The day after it was towed, she went to the impound lot to get it back. She was worried about something going wrong with the propane or the black water due to her home being moved so abruptly. Thankfully, a neighbour secured everything before it was towed and the RV had been handled with care during the journey. The proof was a full glass of water she left in the sink that did not budge at all, despite the tow.

Clarke paid $266 for her home to be returned to Slocan Street near East 12th Avenue, where she had been living during the pandemic.

“I’m not homeless,” she stressed. “I just don’t have an address.”

At one point, the area was home to more than two dozen other vehicle dwellers. But the population is now less than half that after the city told them they had to go. Clarke works full time, and these days, does so from her RV in case the tow truck returns.

She knows not everyone can afford a towing fee to get their home back. One of Clarke’s neighbours had his RV towed and for a while lived on Slocan in a tent. He eventually disappeared.

It shows how easy it is for people to become homeless in an expensive city like Vancouver, said Clarke.

“There are a lot of people on the streets who end up in situations that they can’t afford.”

The City of Vancouver is in the middle of cracking down on people living in their vehicles on public streets, citing “illegal” parking bylaws. The city is asking vehicle dwellers to relocate to private property, work with the city to find social housing or risk having their vehicle towed, which the city calls a “last resort.”

“We don’t want to be enforcing and risking people’s loss of accommodation,” director of streets Taryn Scollard told The Tyee in May when the crackdown began.

Warnings came with four months’ notice, she said, and the city’s hope was that people would be relocated before the winter.

The Slocan group had been given until May 26 to leave. Those who have parked in other clusters around the city have been given various July deadlines. Vehicles are allowed to remain where they are if their owners are working with the city to find housing arrangements, including Clarke and some of her neighbours. (Her towing turned out to be a mistake and the city apologized when she called).

In March, there were about 247 vehicle dwellers parked in large clusters, according to the city. There’s one cluster by Jericho Beach, one under the Arthur Laing Bridge and many tucked away in the city’s industrial areas.

After the city began giving out notices of enforcement, the number dropped to about 134 in June. It’s since picked up slightly to about 150. These numbers do not include solo RVs roving around the city.

This isn’t an easy population for the city’s homelessness services to connect with. They are, after all, on wheels, and could vanish overnight. So far, the team has connected with 80 people living in vehicles. The majority didn’t want help, but 30 were interested in housing assistance. Five have already moved into new homes.

Clarke worries about those who refuse to move and might become homeless, having briefly experienced it herself. She also worried about the province’s recent July 10 deadline for renters to repay pandemic rents and utilities to their landlords, and whether that is causing more homelessness.

Clarke is open to relocating to an RV park, but many in the Lower Mainland don’t have room, don’t welcome vehicles beyond a certain age or don’t allow people who intend to live in them long-term. They also don’t offer much security, with cases of people in such parks vulnerable to eviction.

While living in RVs, Clarke and her neighbours have experienced stigma from every direction.

“Growing up in Vancouver, being white, being a woman, I haven’t had much prejudice, I haven’t been judged, I haven’t been criminalized. But in the last year-and-a-half that we’ve been here… well, it’s definitely an eye-opener.”

There are glass bottles and dog poo thrown at their vehicles.

Then there are the complaints about them to the city, cited as a key reason behind Vancouver’s decision to remove RVs from public streets. The city had previously been lax about enforcement, in step with B.C. provincial health officer Dr. Bonnie Henry’s suggestion to not displace people during the pandemic.

A friend of Clarke’s filed a freedom-of-information request to the city to read exactly what residents were saying. Some were sympathetic, saying that many RVs are parked on underused land.

“You have modular housing for people living in tents and on the street but these people have homes and they just need a place to park them,” one wrote.

But other responses painted RV dwellers as deviants, citing a school lockdown in May caused by a “conflict with a gun between two people.”

“It left parents thinking there was some sort of crime going on, and that was not the case,” said Clarke.

What had happened was that someone spotted her neighbour William with a drill and thought it was a gun. It resulted in a lockdown of the nearby Vancouver Technical Secondary School until police officers determined that William did not in fact have a gun. The Tyee confirmed this with police.

The Slocan group has also received flak from what might seem like a surprising party: netizens from the online RV community, who’ve told off the Slocan group for breaking the rule of thumb of staying in one spot for too long.

Mobility is easier if you choose “van life” as a road-tripping lifestyle, most recently popularized by the Oscar-winning film Nomadland. But Pat, who lives down the road from Clarke with her dog Sumo, says this hides the fact that many people live in their vehicles, whether RVs or cars, out of necessity.

“I didn’t choose to be on the street,” said Pat, a shoemaker in her mid-60s who used to work at places like famed Dayton Boots on East Hastings Street. “I lost my job, and I lost my apartment and got evicted because my landlady’s daughter wanted my apartment.”

She happened to have purchased an RV — a special model known colloquially as the “B Plus” — for travel in retirement.

“I couldn’t afford another apartment on unemployment, so I moved into this. It’s a good thing I had it.”

She currently works part-time in orthotics.

Pat keeps a close eye on bylaw officials that come by Slocan and 12th. She’s watched officers ticket people like her who live in RVs, but not the U-Hauls that park overnight or the drivers who leave their cars in the area to take the nearby SkyTrain, parking for longer than the three hours the city allows.

“It’s discrimination. They’re targeting us,” said Pat. “One day, [the officer] had to ticket everybody on the street because I was following him around. I made him give it to all of the U-Hauls.”

Pat was furious when she found out she had an unpaid parking ticket — from a friend whose address she uses — because she never received a physical copy. Her neighbour remembers seeing the bylaw officer come around that day and take a picture of her licence plate but did not leave his car to leave her a physical ticket.

Coun. Christine Boyle learned about the uneven application of bylaws herself when she visited the Slocan residents.

“I had no idea that U-hauls were parked on the street,” she said. “I’m listening and learning from [the residents]… and continue to ask questions of staff to ensure that there’s some consistency.”

Ultimately, Boyle believes the discretion that city staff have at their disposal is a good thing. It allows them to work with each individual according to their housing needs, rather than lay down an approach of “this is the rule and we have no option but to enforce it.”

Still, Clarke and her RV neighbours have been trying to raise awareness about their situation and push for a different solution. Their hope is that the city might give them an under-utilized piece of public land to temporarily park and live. Their dream is a co-op model, and Clarke has been walking down Commercial Drive and visiting the Trout Lake Farmers’ Market to gather support.

It’s been a tough few weeks for the Slocan group, especially when the deadly heatwave hit in late June. They’re thankful for the shade from the trees, one of the reasons they picked that spot to park. Pat had eight fans running in her RV, the strongest of which were a tiny pair of powerful ADDA computer fans. Clarke had AC in hers, but it pushed her utilities to $20 a day — three times more than usual. She also shared popsicles.

That hot week, a man died in one of the RVs. Scavengers rummaged it for parts and left a mess, the kind of behaviour that passersby like to blame vehicle dwellers for. Clarke is currently organizing a few of her neighbours to do a thorough street cleanup to help lessen the stigma.

Despite the crackdown on vehicle dwelling in Vancouver, Clarke can’t imagine paying to be a tenant again. She grew up on the west side, and housing prices in the city continue to balloon beyond expectations.

Christopher Cheung is a reporter at The Tyee, where this story originally appeared on July 19, 2021.