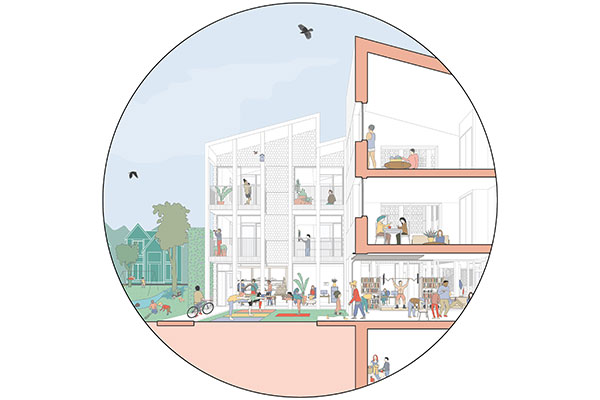 Urbanarium has just announced the winners of The Mixing Middle competition, which sought innovative mixed–use designs for four Metro Vancouver communities: Surrey, Coquitlam, North Vancouver, and Vancouver. Forty–four proposals were submitted from across the country and beyond, including Iran, India, and the U.S. The competition included an overall winner and runners–up, decided by a panel of architects, planners, and an entrepreneur, in addition to a Planners’ Prize, decided by a panel of urban planners.

“We were thrilled with the creativity and ambition of the submissions we received for The Mixing Middle,” says competition co–chair Marta Farevaag. “The winning submissions imagine innovative uses for single– family residential areas in ways that increase social engagement, inclusion, and affordability at the individual and community levels. These designs are coming at a time when many municipalities are in the process of updating their city plans. We hope that the results of The Mixing Middle will not only empower communities to dream big, but also encourage cities to explore new forms of development.” Following a rigorous day of deliberations, the two panels of jurors selected the winners of Urbanarium’s second design competition.

The Mixing Middle overall winners are:

“Many of the proposals we reviewed were thoughtful in their approach, but what stood out for us about Lots in Common was that it challenged the idea that individually owned land is best,” says Catarina Gomes, a member of the overall prize jury and a Vancouver Park Board planner. “The submission proposed a network of shared spaces and called into question a fundamental tenet of land use in B.C., offering a paradigm shift in the way we look at ownership — not just zoning.”

Colette Griffiths, a member of the overall prize jury and owner of The Federal Store, an iconic example of mixed-use design in Vancouver, says: “The winning proposals brought together the residential with the commercial in a way that elevated the neighbourhood to a destination. This commercial viability and livability reminds me of Melbourne or cities in Europe — where you pick up fresh bread from one shop, groceries in another, and go for a haircut across the street. It makes for an elegant and compelling solution to residential communities.”

Jury chair and award–winning architect Richard Henriquez adds: “Each winning submission offered flexibility in design while responding to the natural and humanmade environment of their site. The honourable mentions were notable for their artistic sensibilities, poetic narratives, and demonstration of the importance of sustainability.”

The Planners’ Prize was tied between the same two submissions that won second place overall. The teamswill split the $10,000 prize:

“The planners’ panel elected to award two very practical proposals that we could imagine shifting the nature of the conversation across the Lower Mainland,” says Michael Epp, a member of the Planners’ Prize panel and Director of Planning for the City of North Vancouver. “We saw these two submissions as part of a continuum; you could almost think of them as the transect of the mixing middle, which might vary across the Lower Mainland depending on whether you’re in the core or at the periphery.”

Genevieve Bucher, Director of Community Planning for the City of Coquitlam, adds: “Both submissions showcased a combination of gentle density, commercial uses, and thoughtful consideration of scale. We have a big planning program happening right now in the southwest of Coquitlam, so these ideas and conversations are extremely relevant to us today.”

The winning proposals can be viewed online at www.themixingmiddle.ca. A publication about the finalists is forthcoming this spring, along with part two of The Mixing Middle’s video by About Here, Why did we make front yard businesses illegal?

The Mixing Middle Competition was approved by the Architectural Institute of British Columbia.

Urbanarium was first founded in 1985 by a group of committed urbanites passionate about city-making. A registered charity since 2015, the volunteer–run organization’s mandate is informing and engaging the residents of Metro Vancouver to help guide community decision-making. Through a variety of programs, very often in partnership with other organizations, Urbanarium provides the region with stimulating and easy to understand information about how our urban system works, what forces are acting upon it, what alternative futures might be realized, and what we as individuals can do to affect those outcomes.