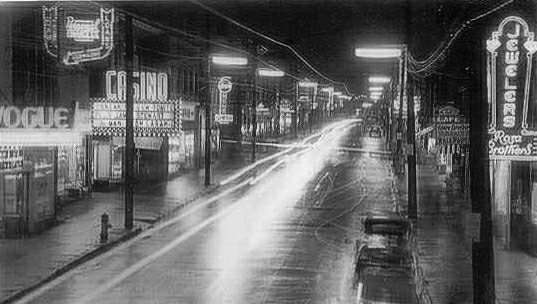 HALIFAX – The great thing about living in a city is that the streetscapes of busy streets are ever changing. One such streetscape which has grown, decayed and is being rebuilt is that of the South end of Gottingen street in Halifax. Driving down this part of Gottingen street today you see construction taking place all over with new condo buildings replacing old movie theatres and shops. One building that stands out today is the large former Vogue movie theatre building prominently situated in the middle of the block between Falkland and Cornwallis streets. What people don’t know today is that this building which has been used in some form or another as a house of amusement – besides being a movie theatre it housed a community theatre, soft-core porn theatre, gay dance club and community centre and a boxing arena – it was originally a Baptist Church.

Construction of the North Baptist Church on Gottingen street began in the latter part of 1866 and was well under way when mention of it first appeared in the local newspapers in January 1867 being described as a “handsome edifice”.[i] The congregation that formed this new church had originally organized in 1848 made up of members from Granville Street Baptist Church (the precursor to today’s First Baptist Church) holding meetings in and around the North End in places such as McIntyre’s Hall on Gottingen street and the Harmonic Hall on Maitland street. In 1849 the congregation purchased land on Cornwallis street and built a church for $2660 which was used for nearly 18 years before the congregation grew too large for the building. That original building would eventually become the Sons of Temperance Hall. The Gottingen street building opened in 1868 and was completely finished in 1869 when the main “audience room” was officially dedicated. The building was significantly modified in 1885 at a cost of nearly $4500 so as to increase the seating and also to fix issues that the 1866-68 building had with acoustics. 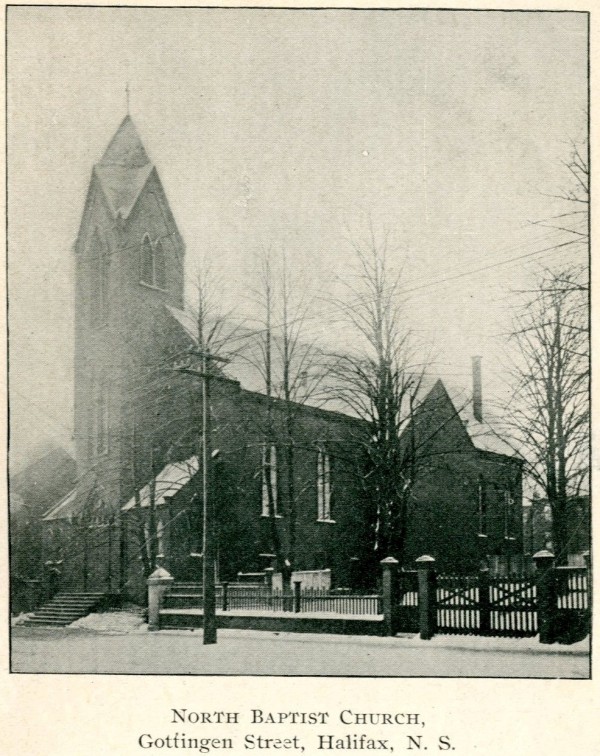 The building pictured is the remodeled structure of 1885. A reference to the remodeling is made in the July 2, 1886 edition of the newspaper The Critic where in it is mentioned that, “the building of the North Baptist Church, of this city, is undergoing extensive repairs, both inside and out. When finished, it is expected to be much more comfortable, pleasant and commodious.”[ii] The congregation of the North Baptist Church seemed to flourish through the 1890s and early 1900s but by the early 1920s the numbers within the congregation seem to have dwindled. Due to the small number of people it appears that the congregation made the decision to abandon the building and sell it off.

One interesting point about the North Baptist Church building is that the first mention of the building in any public document is in the Hansard for the Nova Scotia Legislature where MLAs agreed to pass an amendment to the Act to limit the erection of wooden buildings within the City of Halifax which was a piece of legislation passed in response to the high rate of fires within the city. The amendment was made to the Act in order to exempt the North Baptist Church and its congregation from the rules which prevented the construction of wooden buildings in the city. Interestingly, despite this piece of legislation existing it had no way of preventing the largest fire in Halifax’s history which took place at 9 o’clock at night on 9 September 1859 which burned four acres of the city’s downtown, killing two people, and destroying sixty buildings.[iii]

Between selling the church and the opening of the Vogue movie theatre in the late 1940s it seems that the building was used by local theatre groups and was called The Community Theatre. Little is known about both the groups that used the theatre and the actual Community Theatre itself. However, based on descriptions of the group’s building from maps held at the Halifax Public Library it appears that they used more or less the building as it was when the Baptist congregation left with the exception of the steeple which was shortened. It appears from online references that the Community Theatre had 600 seats and operated roughly from about 1935 to 1947. 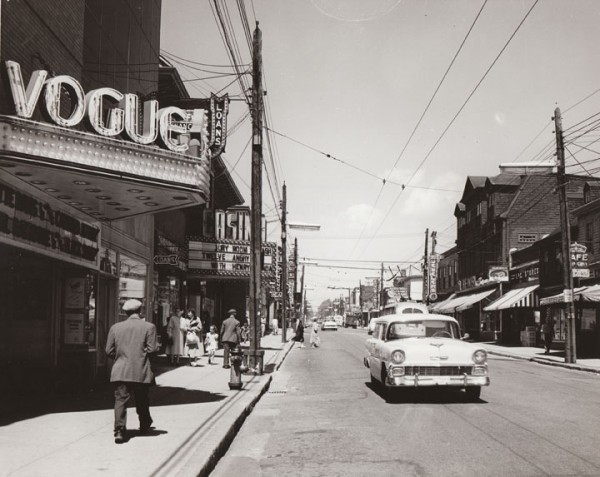 Over the course of a year the building was renovated and the roof was re-enforced with a steel frame to turn the building into a movie theatre expanding the seating to 936 seats. The Vogue Theatre, as it was renamed, opened on 29 April 1948 showing the Bing Crosby film Blue Skies (Chronicle Herald.)

The Vogue operated until about 1970 when it was purchased by Famous Players and closed in 1972.

The building would be used as a movie theatre again in 1993 when Halifax’s repertory film society Wormwood’s Dog and Monkey Cinema relocated to the space from down the street at the Carpenter Union’s Building. Unfortunately the cost of renovations, poor attendance, and according to one source what turned out to be a costly heating system the theatre society shut down in February 1998.

In between its two stints as a movie theatre the Vogue building was the home to Halifax’s gay and lesbian community. In 1987 the Gay and Lesbian Association (GALA) was looking for a new home for its community space and bar Rumors [iv] which had been located on Granville Street. GALA used the proceeds of another building it owned and the profits from bar sales to purchase the old Vogue building and turned it into the city’s gay bar – a bar and dance club that had by all accounts the largest dance floor in Eastern Canada. Rumors operated from 1987 til 1995 when both GALA and Rumors ceased to exist.

Since 1995 the building has had a varying list of tenants who used the space as a dance club. It wasn’t until the late 2000s that the building was repurposed 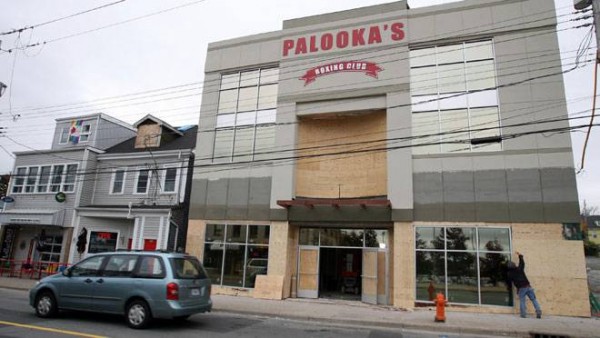 From 2007 to 2012 Palooka’s Gym occupied the space of the old movie theatre. Mickey Macdonald the owner of a number of businesses and a former boxer renovated the space and opened the boxing club to provide training as well as a venue for boxing matches in downtown Halifax. The building was sold to Global Television who announced in January of 2012 that they would be relocating their television studios to downtown Halifax from Burnside where they had been located for close to thirty years. Further renovations, costing close to $3 million, are currently underway to transform the space into a studio.[v]

A city streetscape is ever evolving and no place is this truer than in the plot of land that is situated in the middle of the black on Gottingen street between Falkland and Cornwallis streets. The block looks dramatically different today than it did for most of the last 150 years. A dramatic fire in February 2003, caused by roofing material that combusted, destroyed three buildings to the South corner of the block at Falkland. 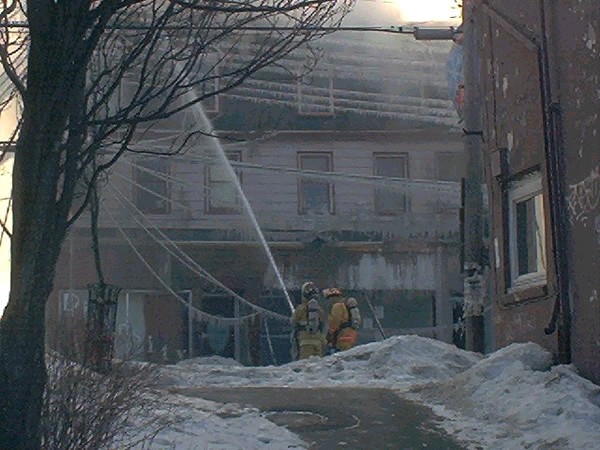 The buildings that last housed Menz and Molly’s bar and restaurant – another bar owned and operated by the gay and lesbian community – were purchased and torn down between 2008 and 2010 and the Falkland Street condominiums were constructed and opened in their place. The neighbouring lot to the North  which for many years had been a vacant lot but was once the former home of the Casino Theatre has been replaced by the Theatre Lofts condominium complex and finally the former site of the North Baptist Church, Vogue Theatre, Rumors Dance Club and Palooka’s Boxing Club is continuing its long history when in 2012/2013 Global Television will open its news and production studio to the site. After many years of economic depression the neighbourhood, which long ago attracted the well to do, is seeing a rebirth.

[iii] The Statutes of Nova Scotia passed in the third session of the General Assembly…held on the fourth February, 1858.

[iv] Information about Rumors was provided by Gay Halifax the online wiki for the gay community in Halifax/Nova Scotia (www.gay.hfxns.org).