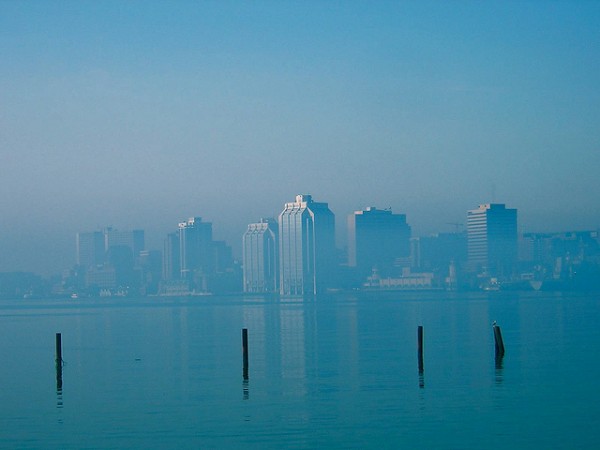 HALIFAX – It has become painfully obvious to many if not most observers that Halifax has a sprawl problem.  The Halifax Regional Municipality covers an area almost the size of Prince Edward Island, and the city seem to be spreading out rapidly to fill those borders. The Halifax Regional Municipality has been experiencing significant population growth in its suburbs, while population in the downtown cores of Halifax and Dartmouth continues to stagnate.

The sheer size of the HRM makes our population density unusually low, at 71 persons per square kilometer.  However, even when we look at urban areas of HRM alone, the density is 1106.4 people per square kilometre, which is still significantly lower than comparable cities like London (Ontario) and Regina, slightly less than Victoria, and far below densities of comparable great cities. If Halifax aspires to be a great city, then we need to start thinking like a great city, and growing in a more focused, sustainable way.

HRM’s Regional Plan, which is supposed to set the framework for sustainable growth in the HRM for the next 25 years, adopted a target that 25% of population growth should take place in the urban core (essentially Halifax, Dartmouth and Bedford) while 50% should take place in the suburbs, and 25% in rural areas. While some would argue that set the bar too low for urban growth, in the first five years of the plan we fell short of even that modest goal, with only 16% of population growth taking place in the urban core, while 56% took place in the suburbs and 28% in rural areas.  In other words, the city is expanding into the surrounding countryside at a rate that is not meeting even a modest target for sustainable growth.  This makes Halifax a textbook example of sprawl.

What is sprawl and why is it undesirable?

Sprawl has been described as a ” land use pattern of single-use zones, typically made up of subdivisions, office parks, shopping centres’ strung together by arterials and highways.”  While it is sometimes referred to as “suburban sprawl”, the problem is not suburbs themselves, but rather the separation of residential, commercial and retail areas into large, isolated, single-use zones which can only be reached by driving, rather than compact mixed-use walkable neighbourhoods. It is typically characterized be lower population density.

Sprawl is problematic from a number of different standpoints, notably its financial and economic costs, its health and environmental impacts and its social dimensions. 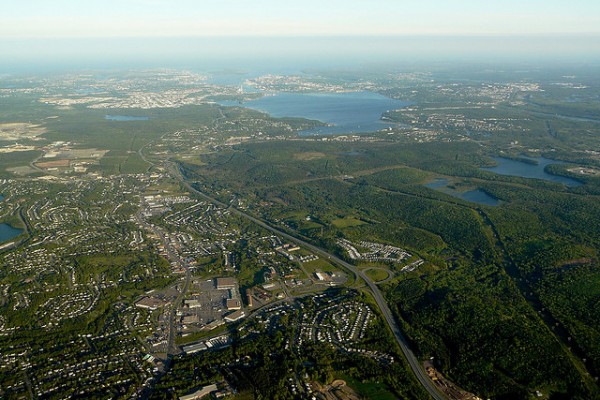 In terms of financial costs, sprawl requires a municipality to provide services to the same number of taxpayers over a larger area.  This requires not only more infrastructure (more pipes, more roads, etc.) but increases soft costs as well: police officers, garbage haulers, and buses, all have to cover a larger area, resulting in increased costs to the taxpayer.

This has a very real impact on the municipal budget.  A recent study commissioned by the HRM shows that changing the urban growth target from 25% to 50% of the population increase would save the municipality  $1.7 billion over the next 20 years.

In other words, to continue to service sprawl, the HRM will either have to charge higher taxes, or decrease service levels just to break even.  Sprawl imposes such high costs, that observers have been linked it with municipal bankruptcies in the US and elsewhere.

Sprawl also imposes economic costs.  For example, because of it’s dependence on single-occupant vehicles, sprawl is also associated with gridlock, which costs the Canadian economy $10 billion a year.

Sprawl is also associated with a number of environmental and health problems.  An ever expanding city can result in loss of wildlife habitat and greenspace, which is essential for both environmental and human health.  It contributes to depletion and degradation of water sources.  The focus on single occupant vehicles increases reliance on fossil fuels and greenhouse gas emissions.  And it increases air pollution and sedentary lifestyles, leading to rising health problems and costs.

Finally, sprawl is associated with certain social problems, including loss of community, income inequality, and diminished social services.  Sprawl has been accused of lacking “quality of place” and creating social disconnection.

What is density and why is it desirable?

Our HRM Alliance defines density as “the number of people per area”.  Statistics Canada defines an “urban density” as 400 people per square kilometer. Spacing Magazine identifies some of the benefits of density as follows: “Residential density[…] is one of the most important characteristics of urban areas. High densities create vibrant streets, support main street commercial areas, and encourage walking, biking and transit use.”

Denser cities avoid many of the problems created by sprawl, as detailed above. Municipalities are able to keep costs (and taxes) down by providing services over a smaller area.  More walkable cities avoid many of the costs of gridlock, and reduce air pollution and greenhouse gases.  Wild spaces and water can be preserved, providing habitat for wildlife, as well as recreational opportunities for people.  Finally, denser cities often provide tighter, more closely knit communities and neighbourhoods.

Why is sprawl becoming a hot-button issue in Halifax?

Addressing the issue of sprawl has created strange political bedfellows.  42 groups as diverse as the Downtown Halifax Business Commission, the Ecology Action Centre, Fusion Halifax, the Heart and Stroke Foundation, the Halifax Trails Association, and the YWCA have banded together as the Our HRM Alliance, dedicated to making the HRM a more liveable and sustainable place.  In particular, the group has been working through the Regional Plan five year review process to try and strengthen the regional plan to more comprehensively address sprawl through seven solutions, including green belting.  They believe that implementation of these solutions will address the problem of sprawl, and help Halifax grow more densely and sustainably.  Groups like the Alliance have been doing a great deal to raise the profile of sprawl as a topic for public discussion.

The issue of sprawl came to a head recently when regional council rejected the application for the 48 story Skye Halifax development.  If built, the two towers would both have stood 150 metres (492 feet) high, making them the by far the tallest buildings in Atlantic Canada.  Council rejected the development on the advice of staff and the design review committee, who found that it did not meet the development rules set out in the HRM by Design rules for downtown development.

Many opponents of council’s decision to nix the proposed building suggested that allowing Skye to proceed would have been one way of addressing sprawl.  Many questioned the HRM by Design rules, and suggested Halifax needs to “grow up” and build taller buildings.  Despite this, many vocal opponents of sprawl, and proponents of downtown development, such as the Downtown Halifax Business Commission, supported council’s decision. So while many agree on the need to densify and combat sprawl, there is a lack of agreement on whether skyscrapers are part of the solution.

While it would seem obvious that building taller buildings is one way to increase density and address sprawl, real-world experience suggests that is not necessarily the case.

On the one hand, New York City, which has 5,818 high-rise buildings, of which 92 are over 600 feet, is quite a dense city by North American standards, with 10,518.60 persons/square kilometer  By contrast Paris, which has only 14 buildings over 492 feet (of which only 8 are over 600 feet).  Paris has used height restrictions to confined high-rise development to specific areas of the city: in most of Central Paris, there are few buildings over six stories high, with the notable except of the Eiffel Tower.  Yet, Paris, with 21,196 persons per square kilometer is around twice as dense as New York.

Houston, which has far fewer development restrictions than most large cities, has 360 high-rises, and 31 skyscrapers over 492 feet.  Yet despite having more tall buildings than Paris, Houston has a major problem with sprawl, with only 1,505 persons per square kilometer.  Similarly, Calgary has few development restrictions and has 14 buildings over 492 feet.  Yet Calgary as a City has a lower density than Houston, at 1,329 person/square kilometer.  It’s urban density is not much higher, at 1,554.8 persons per square kilometer.  Calgary is having serious problems meeting the costs of servicing an ever expanding area.  The problem is so serious, that Mayor Nenshi and the fire department have said the City is having difficulty maintaining municipal fire services to meet national standards. 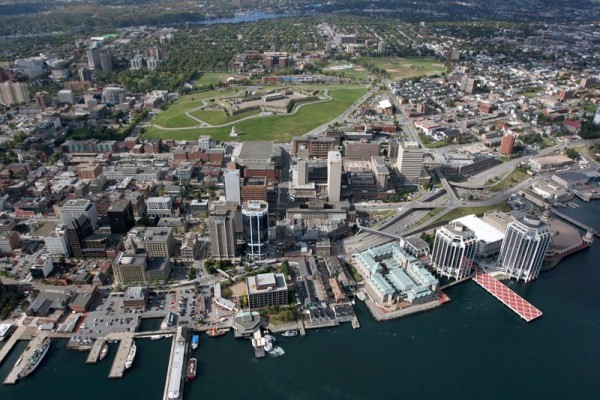 So density is not merely a function of height, and there are ways to achieve density without building skyscrapers.  Some experts have suggested that mid-rise development, and not towers, are the key to densification.   Toronto has achieved significant population growth in its urban core in the last several years, due in part to significant mid-rise development, although this has not been without controversy in some neighbourhoods. However, the question becomes how high we go, and what other considerations we want to balance height against.  Is the sky the limit, or is there an optimal height for achieving density?

There is no question that if Halifax is to increase density and combat sprawl, taller buildings will be part of the mix.  However, the experience of other cities suggests that skycrapers are not necessarily a panacea: the solution will have to be more comprehensive.  Many cities have been able to develop densely without many tall buildings, and in some cases with significant restrictions on height.  Many cities that have allowed tall buildings still have a major problem with sprawl.  Many mid-rise buildings may make a greater contribution than a few high-rises.

Generally speaking, it is the cities that place the least rules around development (like Calgary and Houston) that have the biggest problems with sprawl, while cities with clear, considered development guidelines (like Paris) tend to develop more densely.  Great cities aren’t just grown; they are planned.  Whether Halifax becomes the great city it has the potential to be will depend how well our regional plan, downtown plan, and development rules address issues like height and density.