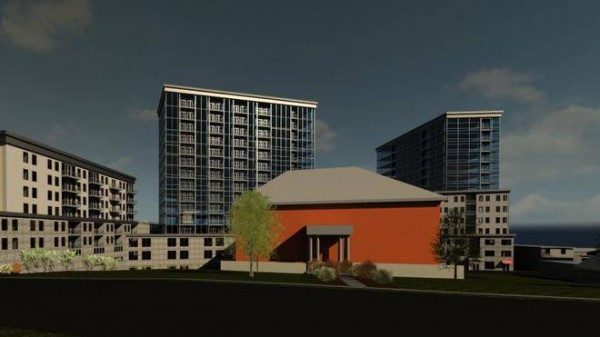 DARTMOUTH – Downtown Dartmouth is entering a new and exciting phase in its history. King’s Wharf is turning the derelict Marine Slips into a new, high-density mixed-use community and mid-rise condo development is continuing along Ochterloney Street. A Renaissance is underway Downtown that will, hopefully, undo the damage done by suburban sprawl and urban renewal. Downtown Dartmouth needs development, but it also needs the right kind of development. It can be a challenging balance and Harbour East Community Council has a tough decision to make this Thursday regarding the Seagate Residences project.

The Seagate project has a lot to recommend. It would infill vacant land and would bring new residents to Downtown Dartmouth, helping to revive retail on Portland Street as well as working towards HRM’s Downtown population targets. Infill development in the core, like the Seagate, also saves HRM on service costs and nets the most tax revenue. The Seagate developer would also contribute funds towards developing the adjacent Shubenacadie Canal Greenway into a proper park.

The Seagate project, however, has been controversial, primarily because of the proposed building heights. A public information meeting in June 2012 attracted well over 100 residents, many of whom expressed concern about the height. In response, the developer made several tweaks to the project, including reduced the height of the Wentworth from 18 to 15 storeys and adding more three-bedroom units that may be attractive to families.

Height is just one element of good design and it’s an element that we as a community often focus too much on. It’s a building’s first few floors that have the most impact on the urban experience, and it’s design elements on these lower floors that really adds or detract from the character of a neighbourhood. Unfortunately, the Seagate has a number of design problems that have nothing to do with height that have been largely ignored by both the community and the developer:

1. Twins: The Fairbanks and the Wentworth are separated from each other by Irishtown Road and are located in a traditional Downtown setting where building variety rather than uniformity is the dominant aesthetic. To stay consistent with Downtown Dartmouth’s character, the two buildings should look and feel like different structures – but they don’t. They have a very similar style, the same pattern of windows and they use the same types of exterior materials. This isn’t a good fit for their surroundings.

2. Dull Street Frontage: Both the Wentworth and the Fairbanks do a few things well at street level. They step back to accommodate height, the main level is at-grade and they have ground floor commercial space. Unfortunately, the street level design is dull. The side of the Fairbanks that faces Irishtown is one long, unbroken, horizontal expanse with identical windows and just two doors. There is no variation or change in the wall and nothing to break it up into a more comfortable scale. It’s visually boring and it won’t make a great streetscape. It doesn’t have to be this way. Other modern developments in Halifax and Dartmouth, like the Vic Apartments, the Waterford and Founders Corner, have done an excellent job of reflecting the traditional variation found along Downtown streets. The Seagate project should do the same.

3. Commercial on Ochterloney: Ochterloney Street is a well-developed commercial and residential street. Despite Ochterloney’s mix of uses, the Wallace is the only building in the Seagate project that doesn’t include ground floor commercial space. This doesn’t make much sense given the need to attract new businesses to Downtown Dartmouth.

4. The Wentworth/Wallace Wall: The Wentworth and the Wallace are connected to each other. Together, they wrap all the way around Greenvale School from Ochterloney to Irishtown, forming an L-shaped wall around Greenvale. This layout will prevent pedestrians from moving through the site between Ochterloney and the Shubenacadie Canal Greenway. When fully developed, the Canal Greenway has the potential to be one of HRM’s great urban parks. Physically and visually cutting it off from Ochterloney is a terrible way to layout the site. The Canal Greenway and the Seagate should work together, but instead they’ve been developed in relative isolation. Downtown Dartmouth is missing a real opportunity if this development proceeds without regards for the plans and the potential of the Shubenacadie Canal.

On Thursday night, Community Council will face an all or nothing decision on whether to approve or reject the Seagate. There’s no further opportunity to tweak the project. The all or nothing decision begs the question, are Downtown Dartmouth’s existing planning laws up to the task of enabling high-quality redevelopment? Sadly, the answer is no.

Dartmouth has outgrown the existing Downtown Dartmouth Secondary Plan. The Plan imposes a long, costly and uncertain approval process. This is how the process works:

The uncertain outcome and long time period (the Seagate project has been in the works for nearly 3 years!) not only discourages investment, but it provides few meaningful opportunities for planners and the community to refine proposals. It encourages planning in isolation, preventing developers, the community and Council from seeing the bigger picture of how development fits together as a whole. In the Seagate project, the discussion became so focussed on height that other design issues have been almost completely overlooked. This is not a good way to manage growth in a complex Downtown area, and it is certainly no way for Dartmouth to reach its potential.

What Downtown Dartmouth needs is the same type of HRMbyDesign process that has been successfully implemented in Downtown Halifax. The HRMbyDesign Downtown Plan established clear rules regarding height in Halifax, which eliminated the guesswork for developers and the community.

Overnight, most of the rancour over development in Halifax disappeared because people know what to expect and the private sector was given the certainty needed to make investment decisions. HRMbyDesign has also provided Downtown Halifax with contemporary design standards and a review committee to tweak projects. HRMbyDesign gives our municipal officials the tools to do their job more effectively.

If the Province finally approves changes to the Halifax Charter to enable density bonusing, HRMbyDesign will also allow HRM to leverage private-sector money for public benefits, such as affordable housing. The clear rules and expectations and design criteria seems to be encouraging new development and producing good results in Downtown Halifax.