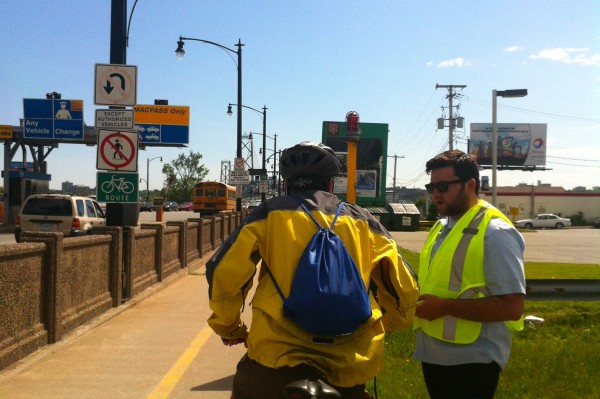 HALIFAX – Starting this week, cyclists and pedestrians along the Macdonald Bridge will be requested to participate in an intercept survey on the lane closures for the Macdonald bridge re-decking project. The survey requests participants’ origin and destination points, travel patterns, how they anticipate accommodating the lane closures, and what types of initiatives can be done to support active transportation (AT) during the project. The AT lane closures are set to happen in early 2015, two months prior to (and in preparation for) the re-decking project.

Last week, the Halifax Harbour Bridges (HHB) held a public information session on the AT lane closures. During the construction period, both the bike lane and pedestrian sidewalk will be closed, with vehicular traffic permitted only between 5:30am and 7pm, Monday through Friday. The public information meeting, held at the Dartmouth Sportsplex, was very well attended by cyclists and pedestrians concerned about possible repercussions of the lane closures on their daily commutes. The Macdonald bridge, after all, serves as the only direct, 24 hour access between Dartmouth and Halifax for cyclists and pedestrians.

The impressive 150 million dollar re-decking project itself will require entire panels 10-20 metres long to be replaced during evening and weekends; all (at least in theory) in time for the morning’s rush of vehicular commuter traffic. In preparation, the bike lane and sidewalk will be removed in February 2015 – two months prior to the re-decking.

In order to accommodate active transportation commuters, HHB plans to purchase 3 shuttle buses, each equipped with front racks (such as those on Metro Transit buses) and a rear trailer-style bike rack, which would accommodate 16-18 people. These shuttles will provide a free 24-hour service to cyclists and pedestrians wishing to cross the bridge. HHB is also looking at acquiring property on both sides of the bridge to serve as shuttle stops; potentially including the corner of Gottingen and North on the Halifax side, and the area just north of the bridge entrance on the Dartmouth side. During bridge closure hours, the shuttle route will require a detour up and around the Mackay bridge. The expected increase in commute times for active transportation users is still uncertain, as many of the logistics of the shuttle (ie. Bicycle and passenger loading and unloading times, and total trip time) have yet to be calculated.

Comments from the public at last week’s information session suggest a general uncertainty towards the usefulness of the shuttle proposal; and that a free (or at least more frequent and 24 hour) ferry service be offered for the duration of the re-decking project. Some other ideas offered by the public during Tuesday’s information session included allowing cyclists to cross as an “escorted pulse”, and a carpool pick-up area at either side of the bridge that would provide drivers who pick up a pedestrian or cyclist complimentary toll service.

The short and long term effects of this closure are still unknown. Will those commuting by active transportation continue to do so during (or after) the closure? HHB and HRM are attempting to answer some of these questions through the surveys being distributed on the bridge, which were also distributed at last week’s meeting. The surveys can also be found online at: https://surveys.dal.ca/opinio/s?s=19259

On the bright side: HRM has announced that it will be reusing part of the bridge panels to build at least 5 new active transportation bridges, starting in 2015. This will be a great boost to the municipality’s challenged active transportation network. It is unclear as to whether the bike lane approaches for the Macdonald bridge will be revamped or changed. The on-ramp on the Halifax side has been the source of criticism and debate for years for its inconvenient detour, steep gradient, and blind corner, among other issues.

In order to better communicate the developments of the Macdonald bridge re-decking project to the public, HHB is creating a website on which updates, shuttle service times and other information will be posted and kept up-to-date.