HALIFAX – North Park street is a relatively short street. Only two blocks stretching from the intersection of Cogswell and going North toward the intersections of Cunard and Agricola streets. However, it’s a street with a lot of history. One spot along this road that has always intrigued me is the parking lot located on the corner of North Park street and a tiny little lane called Armoury Place which runs alongside the Halifax Armouries, formerly called John’s Lane.

In the above photo you can clearly see a granite stone wall that runs along the length of the parking lot. I notice these things when I walk around town and it always has me asking when is a parking lot more than just a parking lot?

The Old North End is full of little nuggets of history like that which is the story of this parking lot adjacent to the Halifax Armouries. This piece of property today is being used to hold cars but its past is a story of public good – charity and religion.

The area between the North Commons and Maynard Street was referred to as Maynard’s field as it was a large piece of property that was owned by Thomas Maynard (1770-1857). Maynard came to Halifax after a relatively successful career in the British Navy being a native of Devonshire, England. He married in to the Creighton family (who also owned large fields in the North Suburbs of Halifax which would be subdivided in the 1830s and 1840s to create Creighton Street). Thomas Maynard appears to have begun the process of subdividing his lands in the mid to late-1830s. In particular, Maynard sold the lot of land, that is the parking lot today, to a William Johns and his wife Maria. The Johns – whom we can assume are the name sake for John’s Lane would eventually purchase most of the surrounding lots of land that make up the former lands of Maynard referred to in the deeds as “Maynard’s Place”.

William Johns was the owner of William M. Johns & Sons Iron Foundry. The late 1830s were busy for Johns. The same year that he begins to purchase the Maynard properties he also leaves a firm called Johns, Suttle & Co. of Halifax an iron and brass foundry to form a new business called Johns, Johnson & Co. He would go on to become the sole proprietor of his own firm sometime later (source: Nova Scotia, 13 April 1837).The Johns’ would hold on to this specific lot of land for nearly 20 years when they would begin to sell their properties. The Parking Lot was purchased on 22 March 1859 by a William Murdoch.

Interestingly, Murdoch was not buying the land and all of its houses, outhouses and other buildings for himself he was buying it to donate. Murdoch purchases the land from the Johns’ in March 1859 and then immediately flips the land conveying it to the Protestant Orphanage paying $1,500 in March and selling the land to the orphanage for a mere 15 shillings in May of that year.

The Protestant Orphanage has a long history and we are lucky that a picture has survived of the house that was built – likely by the Johns – and used as the orphanage on North Park street. 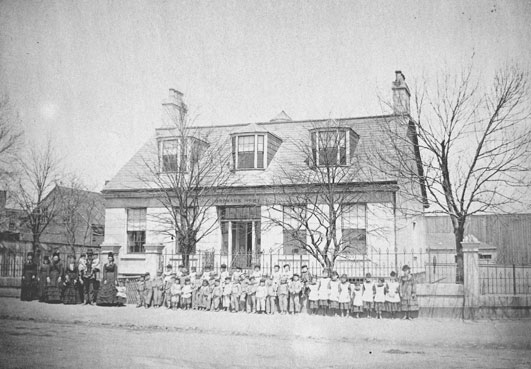 The above photo was taken in 1874 and you can see that the granite wall that encircled the property was present at this time. The Protestant Orphan’s Home was founded in 1857 and as mentioned above it relocated to its home on the corner of John’s Lane and North Park street circa 1859/1860. In the 1874 annual report for the orphanage it states that for that year the home housed 80 children. Given the size of the structure pictured you have to wonder where those 80 children slept?

The orphan’s home stayed at this location until 1883 when the property, along with all of its structures, was purchased by Richard A. Guildford on behalf of the Presbyterian congregation which worshipped out of the Church on Poplar Grove street (now underneath Scotia Square). The property was purchased in July 1883 for $5,500 and all existing structures were demolished and by the 9 October 1883 the frame of the new building was erected. Construction would continue throughout 1884 finishing in September/October of that year. The new church would celebrate its first service on 2 November 1884. 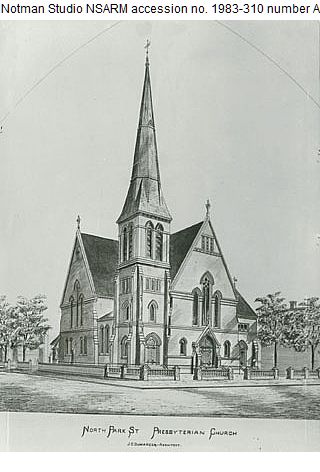 In the History of the congregation the church is described as follows:

“The architecture was of a Gothic order, and on the whole had quite the ecclesiastical appearance. The circular seating accommodated 750 people. In the rear of the main building and connected by two passages were the Sunday School rooms which accommodated 400. Not including the site, the entire cost was about $28,000 of which $12,000 was mortgaged. The architect was Mr. Dumaresque and the contractors Messrs Jordan and Fidler.” (p. 24, History of Saint John’s United Church, Halifax, Nova Scotia)

The Park Street congregation decided in January 1916 to build a new church in the Northwest end of the city – where the population was much larger and where a good number of the current congregation lived. It purchased a lot on the corner of Windsor and Willow streets and began construction of a new building. This project was interrupted by the Halifax Explosion in December 1917 and since a lot of the neighbouring congregations were without homes, due to structural damage to their buildings because of the explosion, it was decided to join together. The new church was opened in July 1918 and by March 1920 it was already too small so a larger church was built on the site, the current building that is St. John’s United Church. The last service to be held at the Park Street church was held on 29 March 1925 and the building and lot were subsequently sold.

The old church building was eventually purchased by the local labour council and became the Labour Temple. The labour council maintained ownership of this building until it was lost to fire on the evening of 2 January 1945. 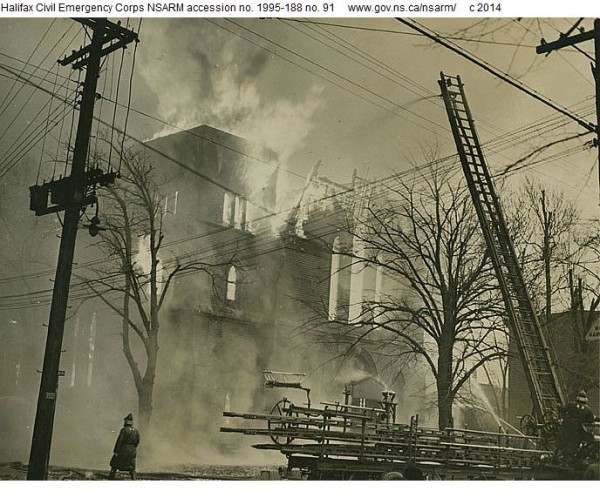 After the fire the Labour Temple was relocated to other premises and it appears that the property was purchased by the Department of Defence in 1952. I haven’t been able to determine whether the property was used for anything else over the last 62 years but it is safe to say that its current purpose – a parking lot – has been its fate for much of that time.

Needless to say it’s never safe to assume that a parking lot is just a parking lot, but rather it is just the unfortunate use of land which, like this piece of property, might have had a very rich and interesting history.