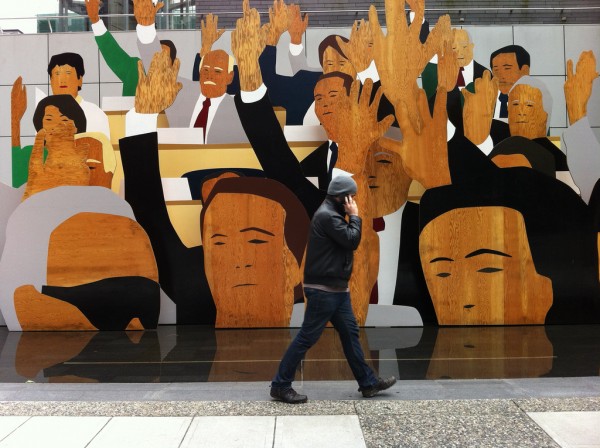 Does the quality of democracy matter for a city street?

Maybe not: an attractive mixed-use boulevard will likely perform well whether residents exercise their right to vote or not. Perhaps its design will be more appropriate if consultations are involved, but some wonderful cities were built with none. In any case, only a few dozen residents are usually ever asked or participate.

Consultation is better than (arrogant) experts trodding on local need, but it is perhaps not the form of democracy most relevant to our cities. Why gather opinion at such a small scale when people can create what they want themselves?

Seattle’s community planning guru, Jim Diers, recently spoke in Halifax. He prefers not to use ‘dotmocracy’ in his workshops. Instead, he splits residents into groups based on the projects they like and tells them to figure out how to make them happen. Putting one’s own energy into a common goal is empowering to residents, and should mean more to decision-makers than responses to a survey. To achieve a goal, residents have to think, re-think, and regularly leave the comfort of home. Circling 5 out of 5 on a survey, in contrast, seems to be little more than a shrug.

Theoretically, infinite opportunities exist for residents to act directly. They can create a guerilla garden or a mural with their own hands. They can team up and push for a new crosswalk or join a non-profit and establish any institution they desire.

Quality of life, however, depends on how many people are doing it, not how many people could. If more residents advocate for parks, organize events, fix problems, promote business, create art and resist highways, what kind of city will we have? That kind of active democracy means something for our streets, because it provides the energy to create what people want there.

Opportunities for residents to offer input can matter less for cities versus making it as easy as possible for them get involved.

But how do we get more people involved? Planners have trouble motivating a room of people to attend a workshop, even when bribed with pizza. How can we create a broadly active and engaged city?

In the last two years, I have interviewed organizations in four countries that offer innovative ways of engaging volunteers. The most important lesson is simple: for people to work on an idea, they have to be in a room when it comes up. Spaces can be designed that foster this kind of interaction, but unfortunately, our contemporary cities offer few.

City theorist Ray Oldenburg laments that many of our low-density communities now lack the bars and cafés where people might have heard the words, “How about we do this?” Even good local watering holes do not exactly pump out civic devotees, however. An overheard conversation at the next table is unlikely to motivate someone into action without a prior connection or anything to help them organize.

Churches, mosques and synagogues are better inspiration for how people might get involved. Active religious believers are the biggest category of volunteers in both Canada and the United States, and the reasons are obvious: they have a welcoming space in which they meet regularly enough to say “how about this?”, and they have the identity, structure and habits of a group to do something about it.

These basic conditions could be applied to many more organizations, but they rarely are. Most non-profits no longer have buildings because they have splintered into small single-purpose groups. Organizations that do have buildings tend to use them strictly as offices.

The result is that if you want to step off the street into a welcoming place where you can relax and dabble in the possibility of getting involved, you can’t. In most cases, the only way to join is to show up at a meeting, and only a statistically small number of people are willing to go to a room where they know nobody–if they somehow heard about it at all.

If we want a vibrant urban democracy, non-profits need to get in the business of creating public space. We need more street-level open doors with comfortable neutral ground inside. In Guyana, I saw an AIDS clinic use a computer lab and library to connect with both new clients and volunteers. At Santropol, in Montreal, a bike co-op acts as a gateway to organic gardening and community development. The Cornerstone Café in Victoria, BC is owned by the local Neighbourhood Resource Group, meaning a coffee might connect you with people organizing local festivals, gardens, and social housing.

Non-profits have a responsibility to get more people involved in a broader set of ways, not only for themselves, but for the quality of the city they are in. To do so, they have to improve that city space themselves, creating places that respond to what we need to get involved: comfort, access, and a reason to be there.

The Ecology Action Centre is planning to expand its building and is running an ideas competition on how they can create this kind of “public space for advocacy.” We have an organization consciously seeking to create a more accessible, engaging place, and therefore, an opportunity to experiment.

What are your thoughts on how to produce a creative urban democracy?