HALIFAX – Some time ago, a great, big (let’s be honest, gargantuan) hole was put in the ground in the middle of the city’s entertainment district, abutting one of Halifax’s most pedestrian friendly streets, Argyle Street.

The hole, which replaced the Chronicle Herald building, came to be in 2012. Still sitting there today, hole-like, it awaits the new (and also controversial) Convention Centre, set for completion in 2016. In the meantime, local businesses have not only faced the difficulties associated with having the opposite side of their street missing, but the conversion of Argyle into a service lane for heavy truck traffic and construction vehicles.

Now I ask you, how’s that for an entertaining, pedestrian-friendly, restaurant patio experience?

This was the concern of many, including the local merchants and the Downtown Halifax Business Commission (DHBC), who worked on getting people together to “make it better”. At this time, the Planning & Design Centre (PDC), was already working on a new plan for Argyle Street. Through these discussions, an idea came together to ‘put back’ the hole-side of the street in a temporary way, the duration of the construction period.

The PDC designed a low-cost concept that would be in the spirit of scaffolding: the Argyle Street Animation Project (ASAP). The idea is that the scaffolding (reinforced and so on) would create a multi-level functional space for art, vendors, film displays (it is the entertainment district after all), and just simple areas to sit, hang out, and be a part of the street. Everybody liked the idea. It’s different, inexpensive, functional, and movable. Beyond 2016, it can even be a means for dealing with other construction holes or areas that are simply not in use at all. 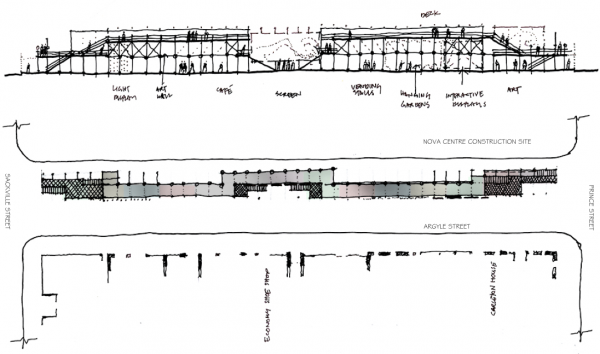 Over time, this idea, like many before (and probably after), lost momentum to city concerns over losing sidewalk space (which, by the way, is gone anyway) and public space (though many would argue the contrary), and other liability issues. Suggestions surfaced for Joe Ramia, the developer of the new convention centre to purchase or rent the land from HRM. Frank Palermo, Professor at Dalhousie University and founder of the PDC, sees it as a “public project on public space” and not something a developer should own. But in the meantime the trucks and their access lane has taken over the space on which this project was envisioned to sit.

Today, the conversation is somewhat stale; just another idea on the shelf, but there is a renewed faith in the project. Over the next month as construction progresses, the trucks and their access lane will be removed, and Palermo hopes the possibility of the scaffolding idea will return. In anticipation, the PDC and Breakhouse are currently working on a design for the project.

Will Argyle’s hole turn into a major innovative victory for holes all over the world? Stay tuned..