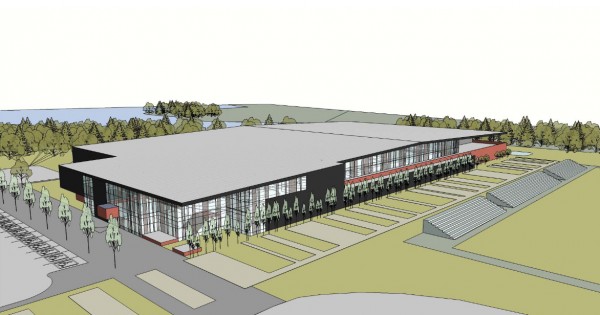 DARTMOUTH – Halifax’s long awaited Arena Strategy is coming before Regional Council on Tuesday and, so far, it’s the proposed closure of the 87-year-old Halifax Forum that has been attracting all the attention. There is, however, an important decisions to be made on the Dartmouth side of the Harbour: where to build the new Dartmouth Arena?

The proposed Dartmouth Arena will have 3 or 4 ice surfaces and will result in the closure of the Gray, Bowles and Lebrun Arenas and, possibly, the Centennial Arena. The Dartmouth Arena will be a regional facility that will not only serve the Dartmouth community, but Halifax as whole. It needs good transportation connections and proximity to people and services. Nine possible sites were identified and municipal staff are recommending a location on Commodore Drive in the Burnside Industrial Park. Staff are also recommending taking a second look at Shannon Park as a possible location, but given that Canada Lands has just acquired it from the Department of National Defence, it seems unlikely to pan out. Commodore Drive is the cheapest and simplest site to develop, but it’s actually a terrible location and the height of penny-wise pound-foolish thinking. 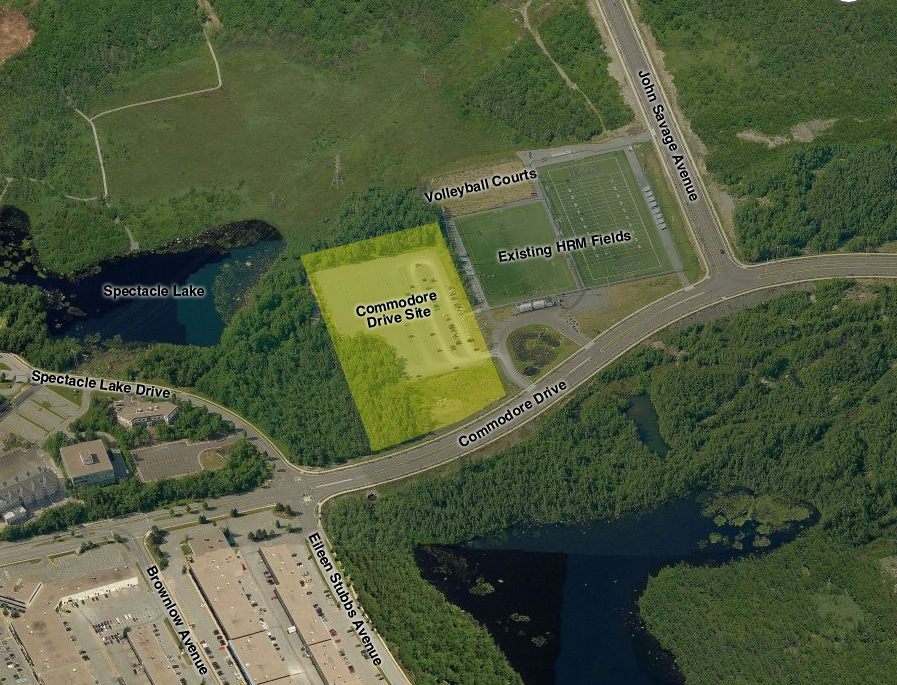 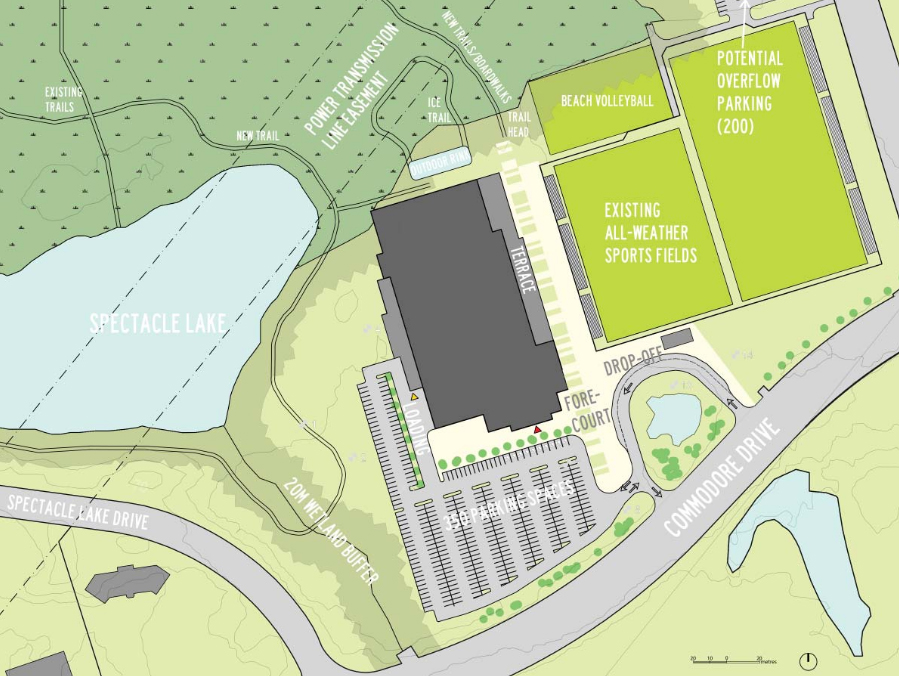 Recreational facilities should be located in communities and signature facilities like the Dartmouth Arena should be somewhere prominent. Commodore Drive is none of these things. The Commodore Drive site is adjacent to an existing soccer field, football field and the new volleyball courts, but, other than that, it’s next to nobody. On one end of Commodore Drive, there is Big Box shopping at Dartmouth Crossing and, on the other end, a few office buildings and warehouse-style strip development. The nearest residential community, Highfield Park, is over 2.5 kilometers away on the other side of the Circumferential Highway. Municipal staff tout the “synergies” of locating the new Arena next to the existing municipal fields and volleyball courts, but, apart from sharing locker rooms and maybe a canteen, it’s difficult to see how soccer, football and volleyball relate to ice rinks. This feels more like an impulse to lump sports uses together regardless of whether there is actually a real benefit to doing so.

Commodore Drive is fairly accessible by car. Its industrial/Big Box location comes with wide multi-lane roadways, but the low-density and segregation of uses in the area means that transit service is fairly weak. Since there is almost nothing on Commodore Drive, except the existing sports fields, there is no Metro Transit bus service along the length of the street. Bus #66 comes close to the Commodore Drive site, looping along Brownlow and Eileen Stubbs Avenues, but it doesn’t operate through Burnside on weekends and doesn’t connect to Dartmouth’s main transit hub, the Bridge Terminal. Hockey leagues are one of the main uses of ice surfaces in Halifax and, to be fair, it’s unlikely that hockey players, with all their gear, are going to travel by public transit if they have any alternatives. Transit could work well though for other uses such as figure and speed skating as well as public open skates, all of which regularly occur in the arenas that the new facility will replace. Spectators and employees might also want to come by transit. Commodore Drive does not encourage people to leave their cars at home, it encourages them to drive.

Although the recommended Commodore Drive location is less than ideal, municipal staff did identify a great location in Dartmouth at Maybank Field. 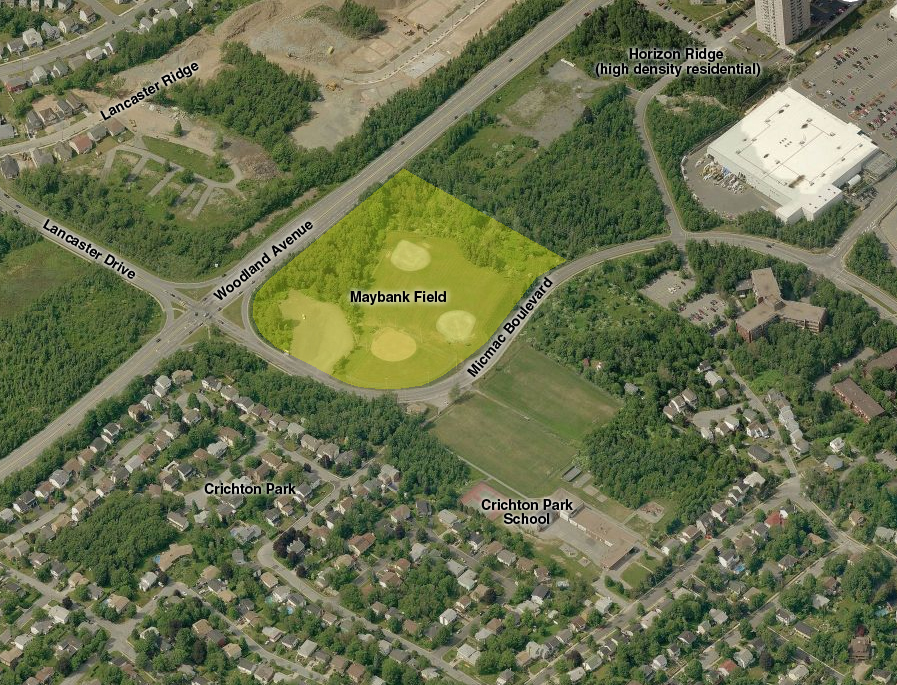 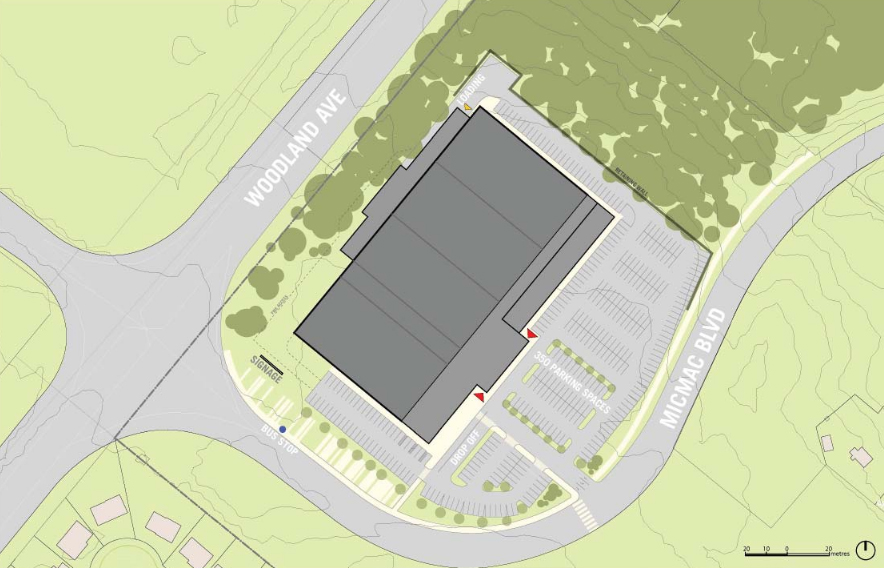 Maybank Field is located at the corner of Woodland Avenue and Micmac Boulevard and is currently home to three ball fields and a small park and ride lot. The location is readily accessible by car from the Circumferential Highway and four bus routes (#10, 56, 66, 72) go right pass it with another two (#54, 55) stopping at the nearby Micmac Mall Terminal. The #10 bus connects to Dartmouth’s Bridge Terminal and runs on a 30 minute schedule from 6:30 till midnight, 7 days a week. Maybank is adjacent to Micmac Mall where commercial services exist and it is right next to residential development in Horizon Ridge, Lancaster Ridge and Crichton Park. Crichton Park School is also just a short distance away, creating a ready opportunity for fitness and after-school programs. Maybank Field is in an existing residential area with great highway and transit connections and access to services. While Commodore Drive is next to nothing, Maybank is in proximity to everything.

The biggest problem with Maybank is that three existing ball fields (2 are back to back sharing an outfield) would need to be relocated. This doesn’t have to be an insurmountable obstacle. Locating a ball field is a lot easier than locating a large facility like a 4-pad rink. Ball fields are best spread out so that they can be used by organized leagues and informally by the surrounding neighbourhood. If keeping a ball field in the Crichton Park area is important for the neighbourhood, the City could look at acquiring the vacant land at the corner of Woodland Avenue and Lancaster Drive (kitty-corner to Maybank) or turning one of the two soccer fields on the other side of Micmac Boulevard into a ball field. Alternatively, the City could replace the Maybank ball fields on one of the rejected 4-pad sites or on the property of one of the to be closed facilities such as the Gray Arena. The City could even look at a way outside-the-box solution of moving the ball fields across the street and putting one of the two soccer fields on the roof of the new 4-plex. The rectangular shape of a soccer field makes it a better fit for a rooftop than a ball field and it’s easier to keep soccer balls in the field. A quick glance at the BMO Centre in Bedford (also a 4-plex) shows the roof could be large enough. It has been done before in other places including Miami, San Diego and Tokyo.

A rooftop field may not be feasible in a climate like Dartmouth’s where winter snow loads are a concern, but the point is there are plenty of conventional and even unconventional ways of relocating the ball fields. Maybank Field is a much better location for Dartmouth’s new arena than Commodore Drive and a mix of sports uses can still be maintained in Crichton Park.

And yet, staff favour Commodore Drive. I reviewed the Concept Design Report and the site scoring system to try and figure out why. Scoring matrixes are always somewhat subjective and the scoring seems to have been unduly harsh on Maybank and overly generous for Commodore. The report is available online, but it’s not attached to Regional Council’s agenda for Tuesday. Unless they go looking for it or read it back in 2012, Councillors will only receive the executive summary. Commodore Drive received pity points on being in the Regional Centre (it’s not) and on being close to residential. It also seemed to score higher than it should have for access to transit, having adjacent parking, being on a bicycle route and pedestrian accessibility. The arbitrariness of it all is revealed when you consider that Maybank was penalized for not having a sidewalk on both sides of the street, while Commodore got points for pedestrian access, despite being located in a car-centric part of the city where few people ever walk. Maybank was also scored harshly in many site suitability criteria, despite the architectural report which noted that a 4-pad arena that is very close to Halifax’s generic template can work on the site. A whole post could be written on the scoring, but suffice it to say, it feels slanted in favour of Commodore Drive. This is likely because Commodore Drive is cheaper and easier to build on, and that’s what’s really driving the recommendation to Council.

Commodore Drive may be the cheapest site to develop, but it’s important to keep perspective on the kind of facility that is being proposed. The facilities that the new Dartmouth Arena will replace are, on average, 30 years old. The Halifax Forum has been around for 87 years! The choice of location for Dartmouth’s Arena is a long-term decision that will be with us for generations. With that time-scale in mind, it’s worth spending a little bit more money to get it right. Maybank Field may not be as pad-ready as Commodore Drive, but it’s a better choice in all the measures that count over the long-term. The City needs to keep the Regional Plan’s goal of getting more people living in the Regional Centre and getting people out of their cars in mind. From that perspective, Maybank Field is, by far, the better choice. Council would be wise to take a second look.