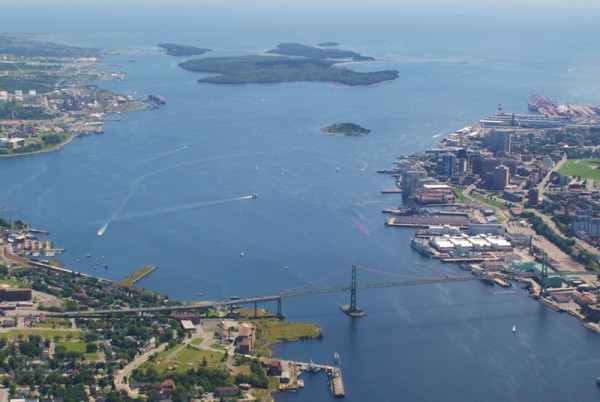 HALIFAX – Sitting at the entrance to Halifax Harbour, McNabs Island is a world apart from the hustle and bustle of urban Halifax. The island is a provincial park and is just a few kilometres from Downtown. It is in close proximity to several 100,000 people, but it sees relatively few visitors. I got to visit McNabs Island this past weekend with Halifax Diverse (a program of the Sierra Club Canada Foundation Atlantic Chapter) and Waterfront Development, and I came away with a renewed appreciation for this special place. If it was more accessible, it could be an important recreational space in Halifax.

McNabs is 5 kilometres long and about 1.5 Kilometres wide with approximately 1,000 acres of land. The island boasts several old military fortifications, impressive views of the harbour and the Halifax skyline, two beautiful sand beaches, a lighthouse and several cultural sites including aboriginal middens, historic houses, a Victorian garden and a cemetery. McNabs is largely forested with a network of trails linking its main features together. It’s a great place to go for a walk, do some cultural/historic sightseeing or spend a day at the beach. Despite its charm and sights, few Haligonians ever visit. Estimates from the Department of Natural Resources pegged visitation at just 15,000-20,000 a year in 2001 and there is no reason to suspect this number has seen any significant change. In comparison, Point Pleasant Park on the other side of the water from McNabs sees an average 1,850 people a day (Point Pleasant Park Comprehensive Plan). More people visit Point Pleasant in two weeks than visit McNabs in a whole year. 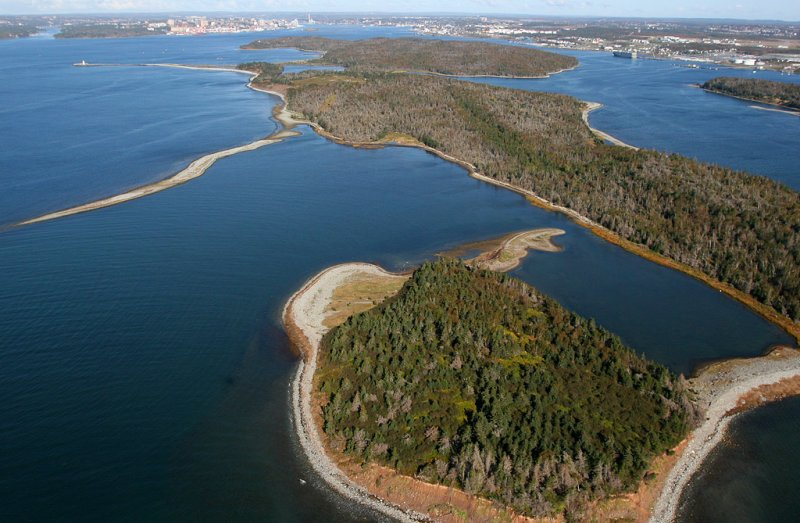 Aerial view of McNabs from end-to-end

It wasn’t always like this. Almost as soon as Halifax was founded, McNabs became a popular picnicking spot. The first publicly organized outing to McNabs came about 100 years later in 1845 and saw 3,000-4,000 picnickers descend on the island for a charity function. The population of Halifax and Dartmouth at the time was only around 23,000, meaning over 10% went to McNabs that day! McNabs continued to grow in popularity and entrepreneurs soon entered the fray adding dancing pavilions, dinning halls, gardens, boat cruises and sporting fields for soccer, rugby and quoits. Fair and midway attractions followed. By the 1870s and 1880s, McNabs was the place to go for an outing. All this changed with the arrival of World War One. Fort McNab was a key component in the harbour defences and military authorities began restricting access to the island. The Halifax Explosion in 1917 and the rise of automobile travel further undermined McNabs and by the 1920s, the island’s glory days were over. The last of the fair grounds closed in 1925 and the island’s role as one of Halifax’s most important public spaces faded into history and has been largely forgotten.

So why was McNabs such a popular place in the 19th century? The Mic Mac ferry. Launched in 1844, a year before the big 1845 picnic, the Mic Mac made McNabs accessible. Without a regular ferry, the island would have never become such a popular outing. The Dartmouth Ferry Commission cancelled ferry service to McNabs in 1928 and a regular boat connection has been largely missing ever since. 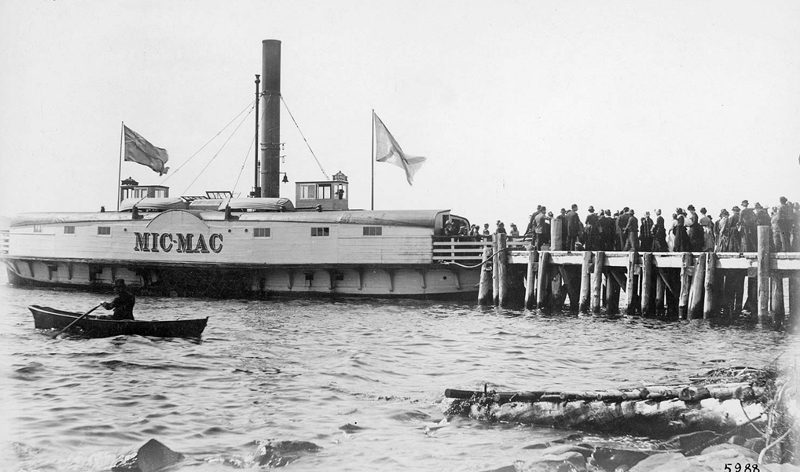 The impact that a more regular ferry service could have today was proven in the 1980s with the McNabs Island Ferry Company. The Company offered more frequent service to the island where they operated a rustic teahouse, but the business folded in 1992. While the company was operating, visitors to the island rose considerably to almost 30,000 and after its demise, visitation fell off sharply, dropping by almost half. Today, the only way to get to McNabs, if you don’t own your own boat, is to charter one. A lot of the charter companies do a great job, but, in terms of convenience and ease, they can’t replace a regularly scheduled ferry. Most of the charters also depart from Eastern Passage, which is not central to most of the Halifax Regional Municipality’s (HRM) population. A regular ferry from the Halifax and Dartmouth waterfronts would open up McNabs to a new generation.

There are successful examples from elsewhere in North America of ferries linking park spaces with urban areas including the Toronto Islands, the Harbor Islands in Boston and Angel Island in San Francisco. In all three cases, some form of publicly funded ferry is available and the schedule varies by season. In all three places, reliably scheduled access has made the islands part of the cultural and recreational life of the city. 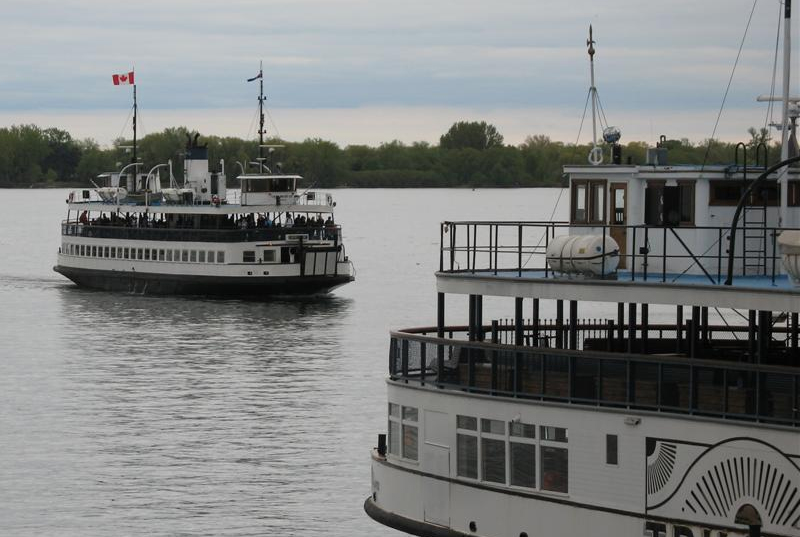 To reconnect McNabs to Halifax, all three levels of government need to come to the table. McNabs is a provincial park, but it also has several national historic sites that are managed by Parks Canada. The provincial and federal governments are directly responsible for infrastructure on the island. Although HRM doesn’t have any specific land interest on McNabs, it has general responsibilities for recreation and transportation within the municipality. All three levels of government have an interest.

One obvious idea would be to go back to the future and have Metro Transit pickup where the Dartmouth Ferry Commission left off in 1928. Metro Transit has four ferries in its fleet and three of the four are tied up on weekends and holidays. Why not put one into service on a McNabs run on weekends during the summer months? If Parks Canada was on board, a ferry route could even include a stop at George’s Island. Parks Canada has been planning to open George’s Island to the public for years and adding George’s to a McNabs ferry route would considerably increase the ferry’s appeal. Garrison Pier on McNabs would need to be upgraded to accommodate a Metro Transit ferry, but if the province wanted to test the demand before committing to infrastructure improvements, one of the existing charters could be hired for a season. My suspicion is a weekend service that departs from the Halifax and Dartmouth waterfronts and runs all day with a regular schedule for a modest fee, would be really popular. If the service took off, all three levels of government would be prompted to make further infrastructure investments in Halifax’s harbour islands, creating a great park and tourist attraction. 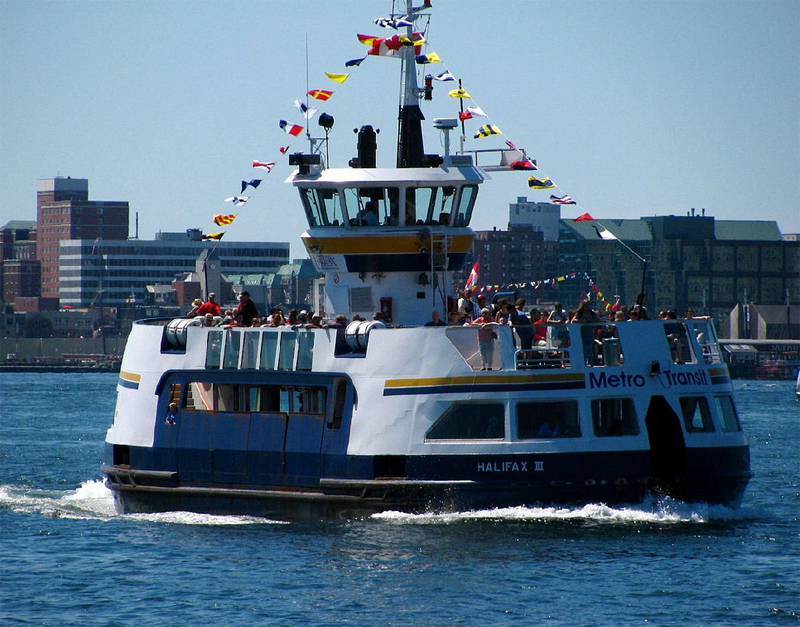 It’s time to stop squandering the potential of McNabs. If HRM wants to live up to its new slogan “Be Bold” here’s a great opportunity to significantly expand outdoor recreation space for Haligonians, highlight some important local history and restore a part of life in our harbour city that has been lost for decades.

I’ll conclude by sharing some of the beautiful sights from my weekend excursion to McNabs. 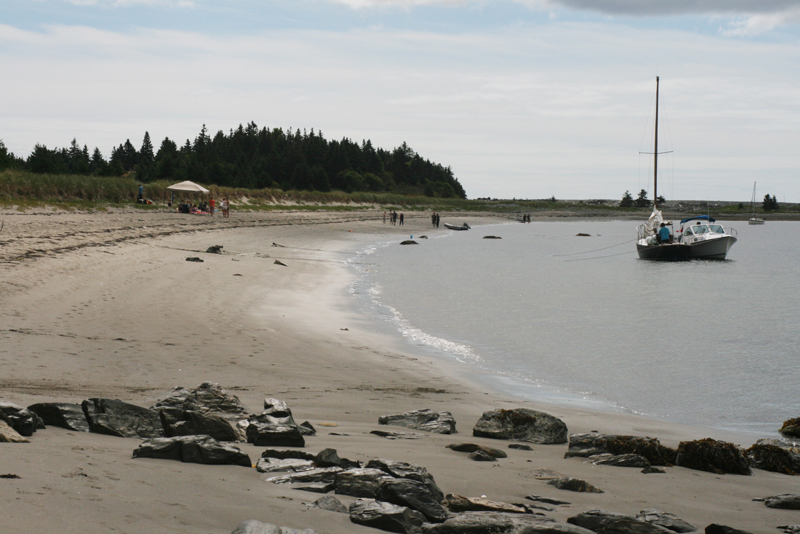 Maugers Beach. Almost no one there on a Saturday in August 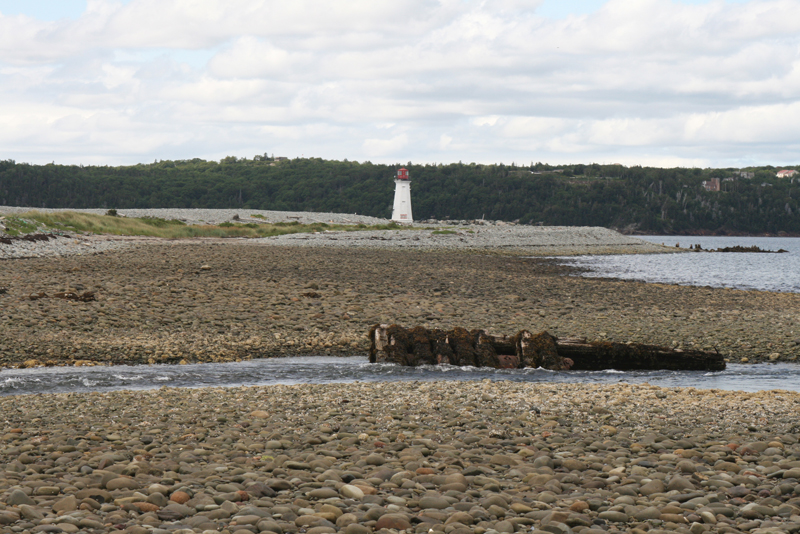 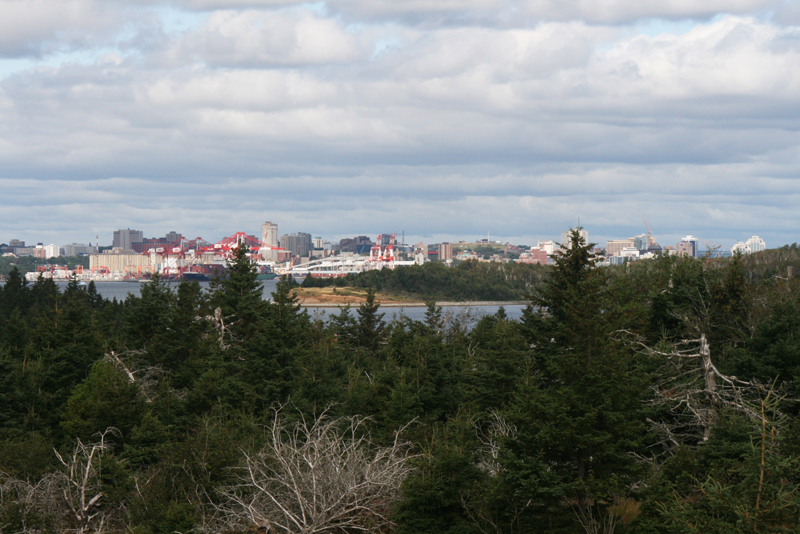 Downtown skyline poking through the trees 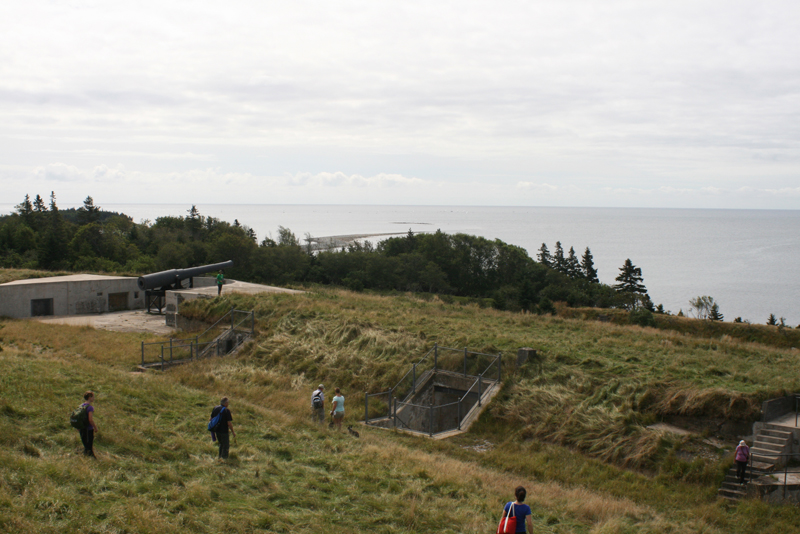 View from Fort McNab of the harbour entrance 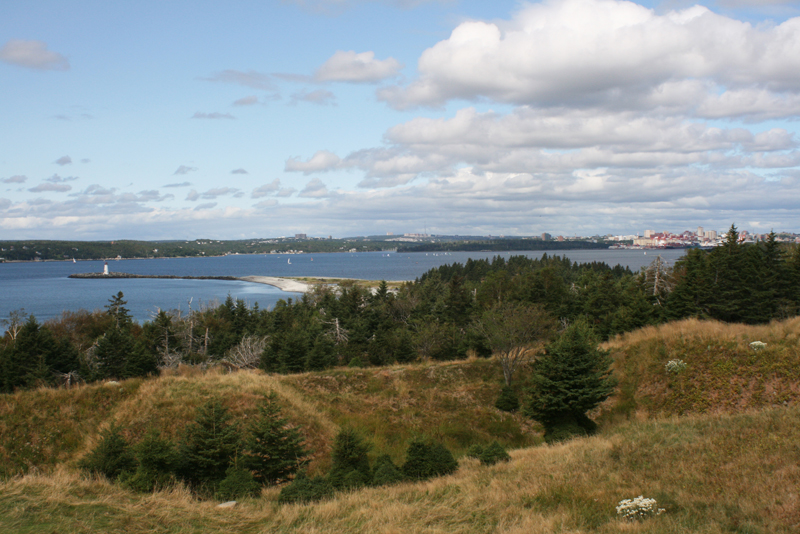 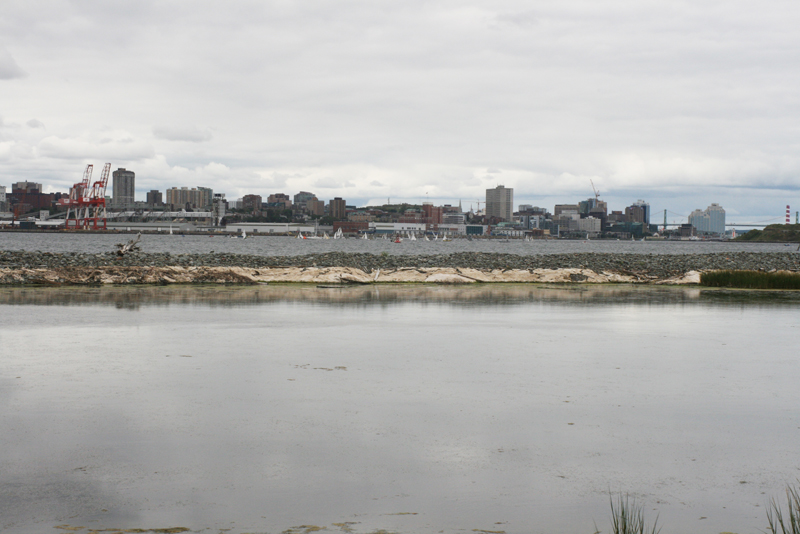 View across Ives Pond to Halifax 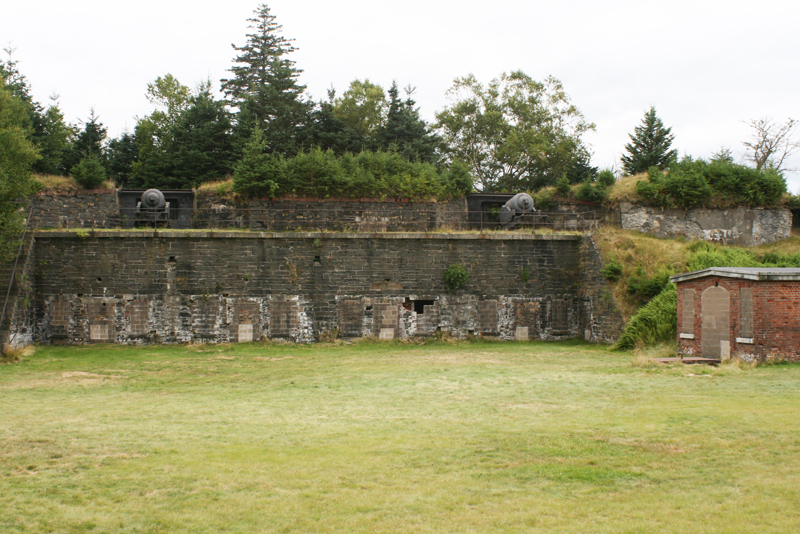 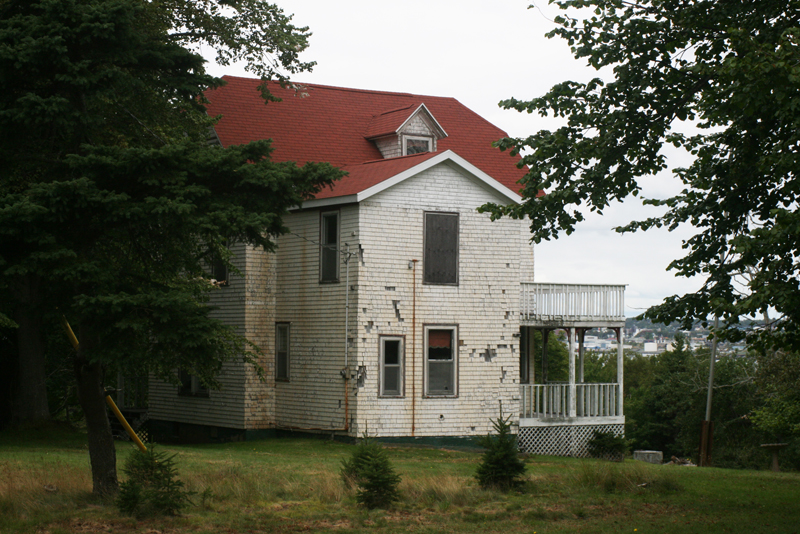