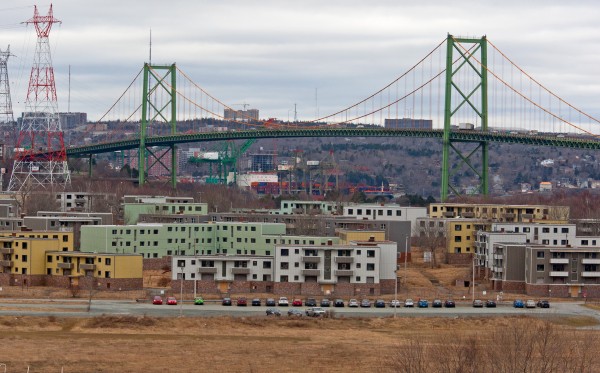 Dartmouth – Halifax’s reoccurring attempt to build a stadium is set to reappear at Regional Council this afternoon. A staff report recommending that the municipality study the potential of purchasing a portion of the Shannon Park property from Canada Lands for the construction of a 20,000 seat stadium will be debated. Shannon Park is former military housing complex that has been empty for many years and ever since the failed Commonwealth Games bid, it has been the preferred location for Halifax’s stadium dream. The business case for a stadium seems dubious given that there was no private-sector interest in the failed FIFA bid just two years ago, but in this article, I’m going to put the economic arguments aside (others have covered them extensively) and focus solely on whether Shannon Park is a good location for a hypothetical stadium. My conclusion is it’s not because:

(1) A stadium and its associated parking infrastructure would require too much land, crowding out other uses and diminishing Shannon Park’s potential to become a new mixed-use, high density neighbourhood.
(2) A stadium would create a place that would alternate between being virtually empty and being completely full depending on whether there was an event going on or not. There wouldn’t be enough other uses nearby to moderate the extremes.
(3) There are better locations for a park and ride ferry.
(4) The land is slated for redevelopment and we no longer need a stadium project to act as a spark to make it happen.
(5) Locating a stadium Downtown would make better use of our city’s existing services and amenities. 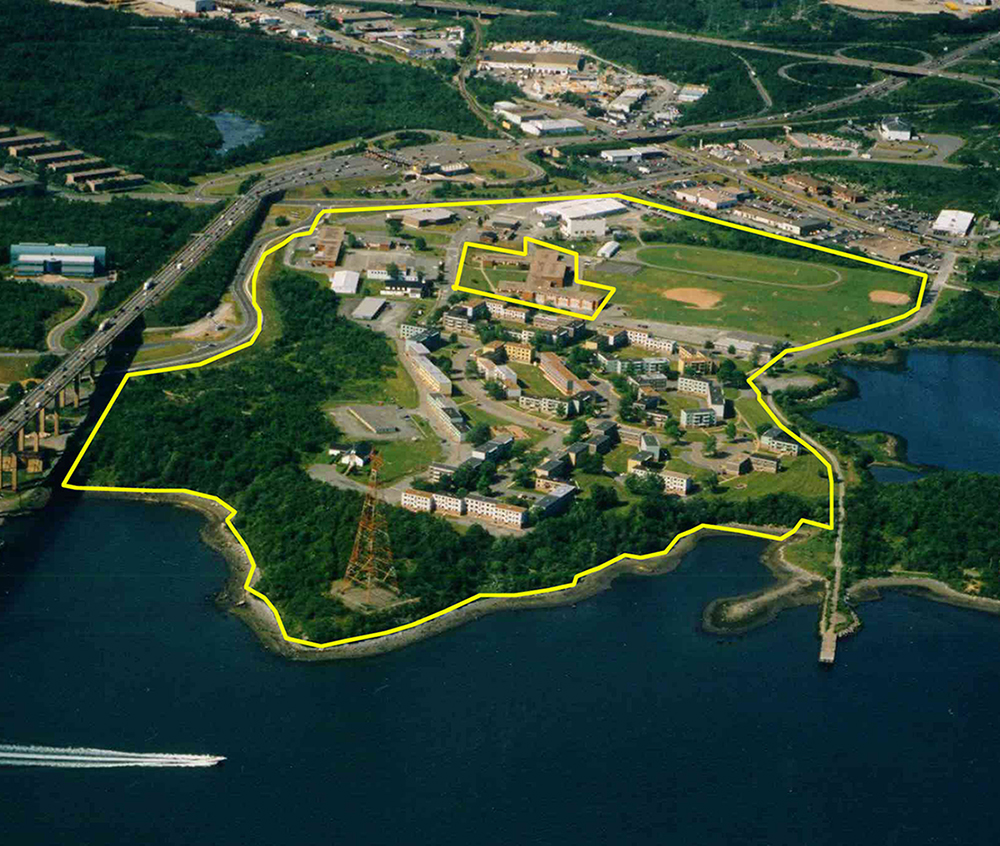 What Would A Stadium At Shannon Park Look Like?
Based on Montreal’s 20,000 seat Saputo Stadium, a Shannon Park facility would need approximately eight acres for the structure. In Halifax’s failed Commonwealth Games and FIFA bids, surface parking of between 1,500 – 4,000 cars was planned. How much parking would be required for a larger 20,000 seat stadium and how much space would be needed? To answer this question, I worked out the ratio of parking spaces to seats for several recently built stadiums identified in the municipal staff report. If Halifax built to the average (not too much parking and not too little), a 20,000 seat stadium would require 3,075 spaces. The resulting surface parking lot would cover 30 acres. The combined footprint of the structure and parking lot, would total 38 acres or 46% of Canada Land’s developable property. This would be a planning disaster. 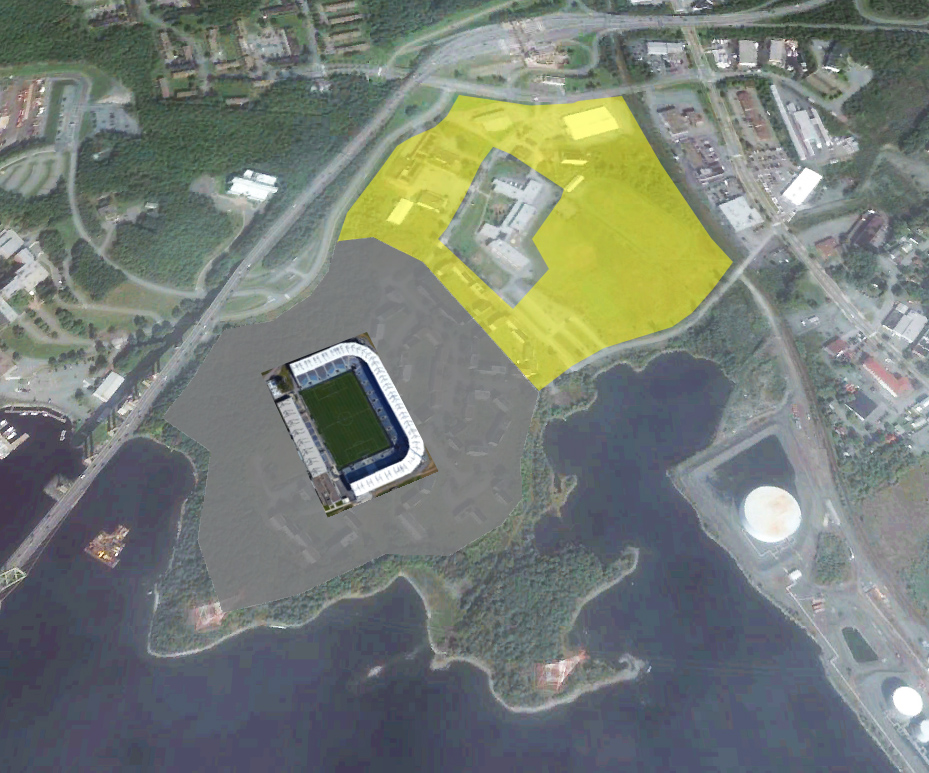 What Kind of Community Would Shannon Park Be?
Shannon Park is in the urban core and considered a prime site for redevelopment. The property, however, is relatively isolated because the harbour and MacKay Bridge/BIO form barriers on three sides. Integrating a redeveloped Shannon Park into the rest of the city will, as a result, be challenging. To make the space active and inviting, Shannon Park will need to include a dense mixture of uses and significant residential population will likely be key. Unfortunately, a stadium would not be conducive to these goals because it would take up half the land and crowd out other uses. The effect would be further heightened because a significant portion of the lands not needed for a stadium would likely prove to be undevelopable (the steeply sloping waterfront) and the only place a stadium and its associated parking would fit would be on the back of the property.

Dedicating nearly half of the Shannon Park lands for a future stadium project is even more problematic when you consider how a stadium actually functions. Most stadiums are places of extremes that go from being virtually empty to being completely full with little in between. Those are conditions that make creating a vibrant community very difficult and would be amplified in Shannon Park’s case by the need to locate the facility towards the rear of the site. Stadiums work best when they’re located in places that already have a mix of activities that they can complement and reinforce without overwhelming the area. For these reasons, Shannon Park would be a very poor choice for a stadium. We shouldn’t situate a stadium there simply because it’s a relatively big site that is currently empty. Shannon Park could be so much more as a high-density, mixed-use community with a variety of commercial and residential uses, a possible ferry, a waterfront park/promenade and some well-designed public spaces. A stadium isn’t needed to redevelop the site.

Saputo Stadium in Montreal. Completely empty when there are no events and beginning to fill up on game day. Photos Jeff Kern and West End.

The Park and Ride Mirage
Proponents of a Shannon Park stadium have often identified the potential for a new ferry route that could use the stadium’s parking lot as a park and ride facility during the work day. This argument has the question backwards. Rather than asking what can be done with the stadium’s large parking lot, what should be asked is where the best place for park and ride ferry services are? The answer is Woodside and Bedford. The Woodside ferry already has a very successful park and ride and, compared to Shannon Park, Woodside is closer to Dartmouth’s growing Eastern suburbs. Woodside is also far better located to divert traffic away from the busy MacDonald and MacKay Bridges. For commuters travelling from Sackville or Bedford, Shannon Park is also not the best location because they would still have to navigate the traffic bottlenecks of Magazine Hill and Windmill Road. It makes much more sense to divert Bedford and Sackville commuters before these choke points with a Bedford fast ferry. A ferry could still be desirable in Shannon Park, but, Shannon Park is better setup to serve a local transportation role in North Dartmouth rather than a regional park and ride system. 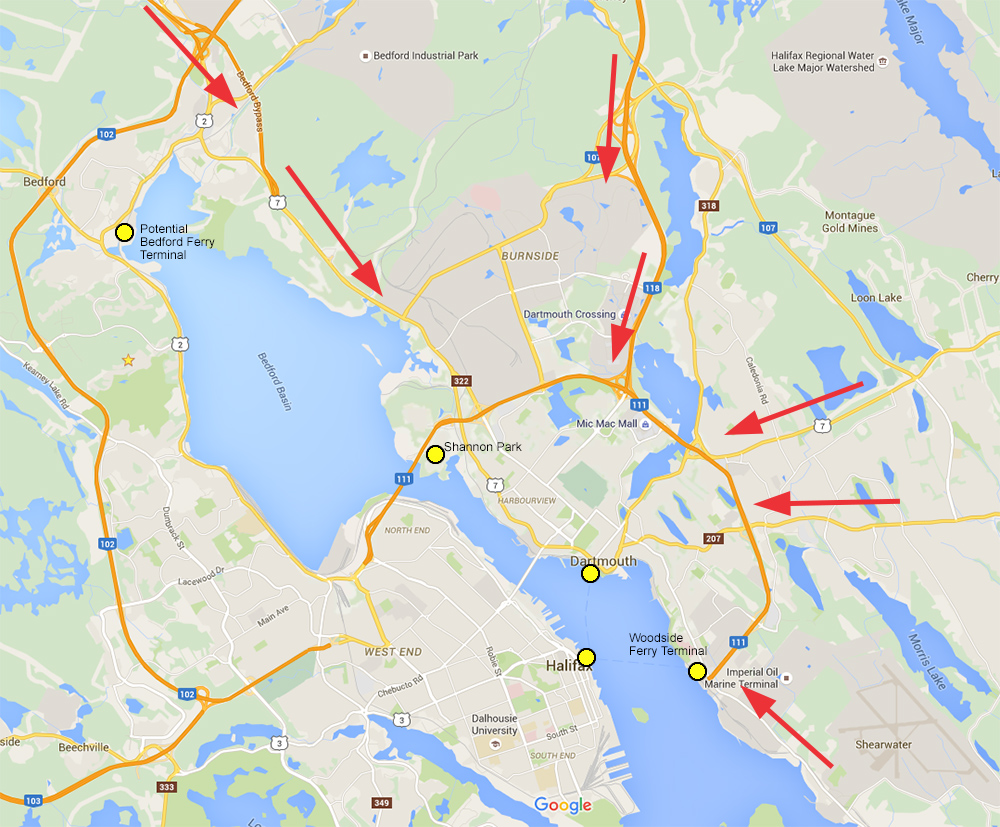 A Parking Garage?
The biggest problem with putting a stadium at Shannon Park is that it would overwhelm the site, largely due to its parking requirement. Could a parking garage meet a stadium’s needs and free up additional land? Yes. Parking garages take up less space, but they are also, unfortunately, very expensive. Using the recently built garage at the Halifax airport as a template reveals that building a 3,075 space, 5-level garage at Shannon Park would require five acres of land. Compared to the surface parking scenario, this make a substantial 25 acres available for other uses. Unfortunately, a rough estimate based on square footage numbers from Altus indicates a ballpark cost of $84 – $98 million for what would be a very large parkade. This would be on top of the cost of building the actual stadium, easily making the overall stadium project a $200 million or more endeavor. Build a very expensive garage at Shannon Park that would be relatively empty most of the time or dedicate 1/3 of the site to surface parking? Neither option is very attractive.

Alternative Transportation
There is one recently built stadium in Canada that has little parking: Ottawa’s Lansdowne Park. The redeveloped stadium at Lansdowne has 24,000 seats, but just 1,200 parking spaces, for an incredibly progressive 20:1 ratio. The average for the other new stadiums was 6.5:1. Ottawa relies on people walking, cycling or taking transit to get to major events. The city encourages transit ridership by operating a shuttle network and allowing ticket holders to ride for free. It’s tempting to try and adopt Ottawa’s transit focussed strategy and we would be wise to incorporate as much of their approach as we can, but Shannon Park’s geography is more challenging and it would place a larger relative burden on Halifax’s transit system. On a sold-out night, Ottawa and Halifax would have virtually the same number of people to move, but OC Transpo has a fleet of 936 buses while Halifax has just 312. Ottawa’s scale give it more flexibility to deploy off-peak resources and our existing park and ride infrastructure is also much less extensive. A Halifax stadium would need good transit connections, but shooting for 20:1 is probably not realistic at this time.

Other Sites
So if Shannon Park doesn’t work as a stadium site where in Halifax would a stadium make sense? The ideal site would be in a high-density, mixed use area that can readily absorb a stadium’s attendance extremes and that is near commercial services such as hotels, bars and restaurants, parking infrastructure and public transit. The only place in the municipality that has all of these things is Downtown Halifax. The challenge Downtown is the limited supply of land and its high cost. The often cited Cogswell Interchange lands are too long and narrow and have too much of an elevation change to make a stadium work. There is one spot that I think is worth considering though that is almost entirely under government ownership and that appears to have enough space to accommodate a Saputo sized stadium: the end of Salter Street.

Salter Street terminates at the waterfront with two large provincially-owned parking lots and a privately-owned and decaying wharf (tugboat operations have moved to Woodside). With the right orientation, the two lots could accommodate a stadium. Some infilling of the harbour would be needed, but the Sands of Salter lot already extends far into the harbour making the infill requirement relatively minor. A Salter Street Stadium would be located just blocks away from several parking garages (Scotia Square, Purdy’s Wharf, Park Lane, Metro Park) which, collectively, offer 3,479 spaces. Being able to use the existing parking infrastructure more efficiently is one of the biggest advantages of a Downtown stadium. Unlike in Shannon Park, not a cent would need to be spent on parking and not a single additional acre of land would need to be dedicated to it. The Downtown waterfront would also be a great location because of its access to public transit, both in the form of Dartmouth’s ferries and the bus network. Halifax’s transit system is already heavily focussed on bringing people Downtown, which means that the existing transit network could be used to encourage as many spectators as possible to leave the car at home without getting into all kinds of special event day transit operations. Downtown is also the heart of Halifax’s nightlife and Downtown has the scale and diversity of uses to moderate a stadium’s empty or full nature. It’s a much better fit than Shannon Park. There would be a lot of study needed to see if Salter Street would work, but I think the potential advantages that the site offers makes it worth a more detailed look. 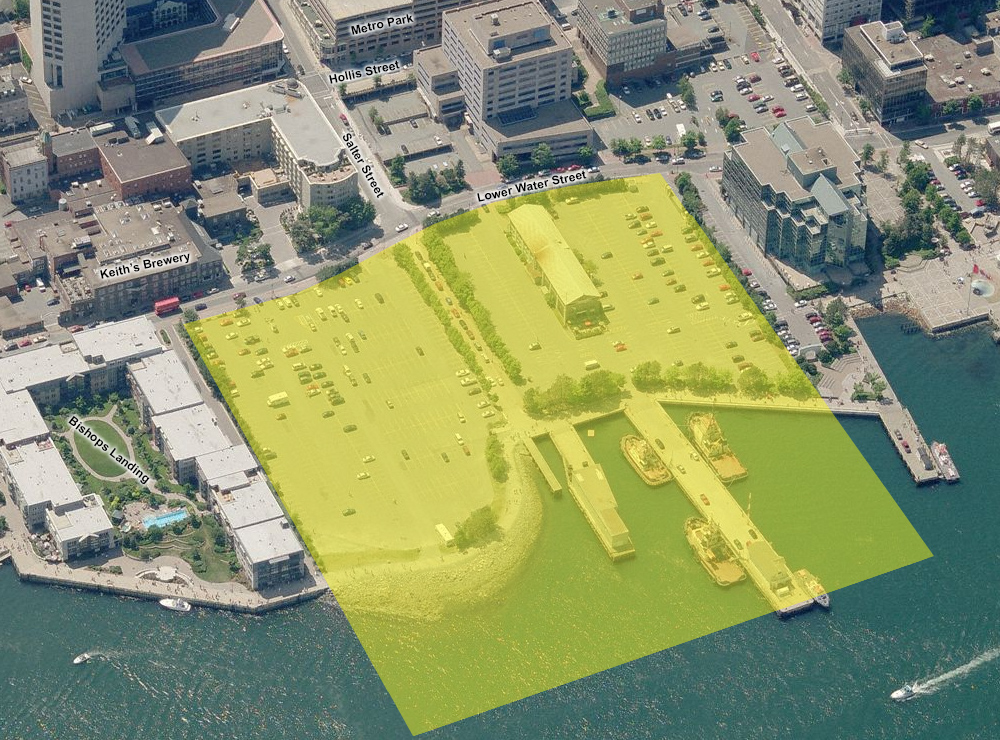 An Alternative Site at the end of Salter Street? Photo Bing

Let Shannon Park be Shannon Park
A Downtown stadium would allow Shannon Park to develop into a thriving mixed-use neighbourhood in its own right. Now that Canada Lands own the property, redevelopment is only a matter of when, not if. When Halifax was bidding for the Commonwealth Games seven years ago, the situation was quite different. The Games were seen as a way to kick start Shannon Park’s redevelopment process, which wasn’t anywhere close to getting underway. That kind of spark is no longer needed. Redevelopment will happen one way or the other, stadium or no stadium. Let’s let Shannon Park be Shannon Park. If we plan for it, Shannon Park has bright future as a new urban neighbourhood. Halifax’s focus should be on working with Canada Lands to facilitate the redevelopment by providing high-quality public spaces and, if density warrants, a ferry connection. The municipality should not try to cram in a mega facility that requires too much land and that could be better supported by existing services elsewhere.