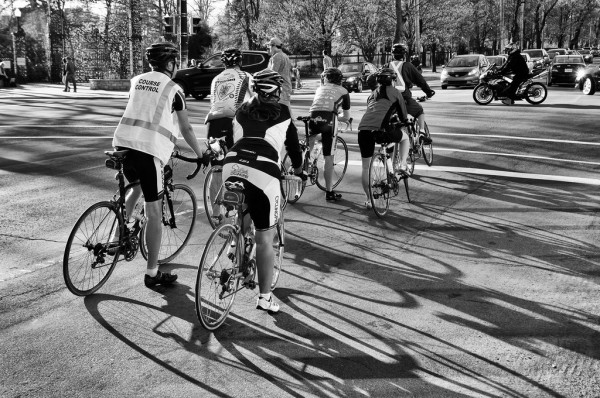 HALIFAX – Every morning I put on my helmet, get on my bike, and enter a world of legal anarchy.

Trying to follow the rules is sometimes scarier than some of the riskier things I got dared to do in high school. Consider intersections where cyclists are supposed to merge into the centre lane just to bike straight, despite the 3,000 pound, fast-moving objects on all sides. Like many, I continue straight through on the right-turning lane, keeping that curb close.

Drivers often complain about people on bikes breaking the rules. It also sucks for cyclists. We would like to be able to follow a consistent set of guidelines that would keep us safe and maintain positive interactions with others on the road. Nobody likes uncertainty.

A recent survey of some 18,000 people found that pedestrians and drivers primarily break the law to save time. It found cyclists, however, do so first and foremost to feel safe. For lack of dedicated infrastructure, cyclists are forced to adapt as best they can to streets and intersections that were designed without them in mind, and so they feel the need to  break or bend the rules.

Cyclists are also governed by laws that only vaguely acknowledge their existence. (For goodness sakes, it’s called the Motor Vehicle Act .) While drivers are told precisely what to do in all variety of situations, cyclists are given a handful of simple prescriptions to apply in all cases. People on bikes are supposed to stay on the right even when it would be precisely the wrong thing to do, such as when biking alongside parked cars whose doors could open at any moment and cause severe injury.

For lack of bike-specific rules, the prevailing thinking for how bikes should act is “Vehicular cycling.” Essentially, cyclists should pretend they are slow cars.

The problem is that bikes are not cars. They are not armoured and do not go as fast. If the number of people brave enough to bike in Halifax without a proper bike-lane network is only 1.1%, the number who are willing to bike roundabouts just like a car is much less. And we expect everyone to adopt this philosophy?

Moreover, some things make sense on bikes that don’t in cars. Bikes take physical energy to start and stop, they have a much tighter turning radius, they fit between cars, and they don’t have a blindspot. Rules cyclists will follow—both intuitively and for safety—must take these differences seriously.

Remember, people on bikes are other times people in cars. They are not a different species. Rules are broken because they fail to reflect the realities that people experience from the perspective of the bike seat—just as drivers speed when a road looks safe to drive fast on.

So let’s develop rules that reflect the reality of cycling.

One reason to develop such rules would benefit all road users: if normal cycling behaviour is legal, we can regulate it.

When all un-car-like behaviour is banned, we lose the ability to encourage good, reasonable behaviour, and to specifically prohibit the worst. Consider the following proposals for more nuanced regulations. (Whether they are laws or just guidelines matters less than that they are official and in driver’s handbooks.

I believe cyclists would be happy to follow rules that showed recognition for the reality of their mode of transportation, even if these rules placed limits on behaviours now common. We all want certainty.

Without rules that recognize that bikes are not cars, police have the choice to either slap every cyclist they see with fines (including police cyclists themselves), or apply rules selectively, which creates uncertainty not only for cyclists but for everyone on the road.

Clarity would help repair the relationship between cyclists and drivers. Different ideas about the legitimacy of cyclist behaviour creates tension. If we could establish a set of rules that all cyclists could subscribe to—and that otherwise could be reasonably enforced—then we would have a single set of norms to reference. There would still be plenty of education left to do—I’m often yelled at for not biking on the sidewalk—but at least there would be one clear set of rules to teach.

If you build it, they will behave

Part of the solution will, necessarily, not only be a change in rules, but a change infrastructure. Some places in Halifax, I do not know how to proceed legally (entering Bell Road from the Commons), and in others, it is impossible. Bike lanes can make safe and law-abiding choices the obvious thing to do. Engineers aim for creating roads in which only 85 percent of drivers will choose to follow the speed limit. In the same way, we can build streets in which more than 85 percent of cyclists will follow the rules because it is the easy, safe, self-evident thing to do.

Someday, I would like to bike to work in the morning knowing every rule I should follow and knowing I followed those rules. Even better, I’d like to know others on the road understand those rules too. Then I could feel I belong there.

Editor’s Note – a PSA from our friends at Halifax Cycling Coalition: It’s time to make the rules of the road better for all road users. Could we re-name it the Traffic Safety Act? Should we make it illegal to turn right in front of a person on a bicycle? Should we make the penalties tougher for not letting a bus in to traffic? The Halifax Cycling Coalition and our partners have made a list of ideas and we want your feedback. Join us on January 21st, 2016, from 6-9pm at the Halifax Central Library’s BMO Room to help us rank the ideas, and add your own to the list. Note that this is a drop-in event, you can come and go at any time through the evening. The draft amendments include feedback from Bicycle Nova Scotia, It’s More Than Buses, and Walk n Roll Halifax. We hope to present the final list to the Minister of Transportation in early February. RSVP here to be kept up-to-date and receive a draft of the ideas in advance: https://cyclehalifax.ca/civi/?page=CiviCRM&q=civicrm/event/info&reset=1&id=35