HALIFAX – On May 24th, Halifax Regional Council approved an extension of Halifax’s water service boundary to allow a 256 unit development in Beaver Bank, a bedroom community. You can see how city planners and Council thought the proposal reasonable. If you look at a map, it seems like it makes sense to just fill in the gap. 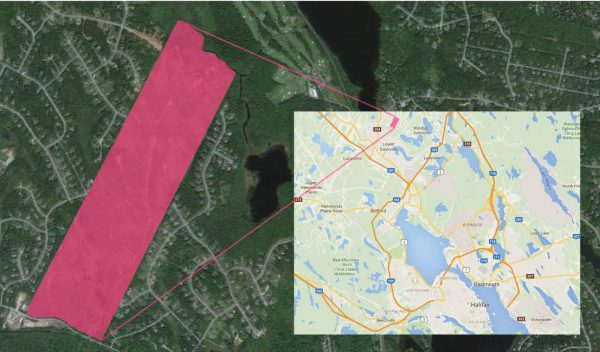 Halifax Water said it was a good idea: the developer will pay for a watermain between the two neighbouring areas. Why not change our growth boundaries to allow another business-as-usual development?

Because car-dependent growth has enormous, well-established costs that could be avoided with complete rural and suburban communities. It’s time these alternatives become the new minimum standard.

But first, let’s look at the costs.

At Beaver Bank’s current person per household, this development will house 742 people. That’s half the population of Chester outside Halifax’s transit service boundary, where they also will have no local businesses or services to walk or bike to.

Of course, this is nothing new: an enormous proportion of Halifax’s development is 100% car dependent. But if it’s normal, does that mean it’s OK? Consider this table: 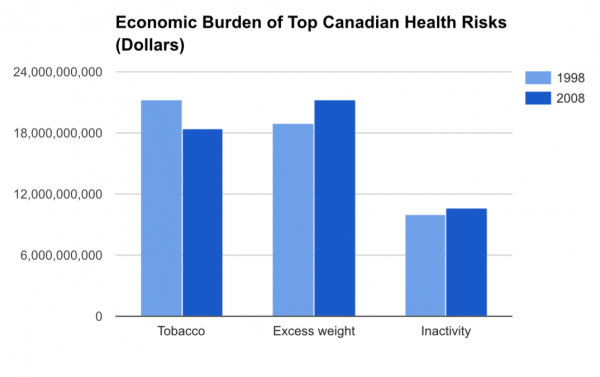 While the health costs of smoking are dropping, the costs of being overweight and inactive are rising to take first place in health costs in Canada.

So how do we combat this health crisis? No matter how great our advertising campaigns, we will likely never convince every Canadian to go to the gym three days a week. Fundamentally, if we want Canadians to walk or bike, we have to build communities where people have things to walk or bike to. 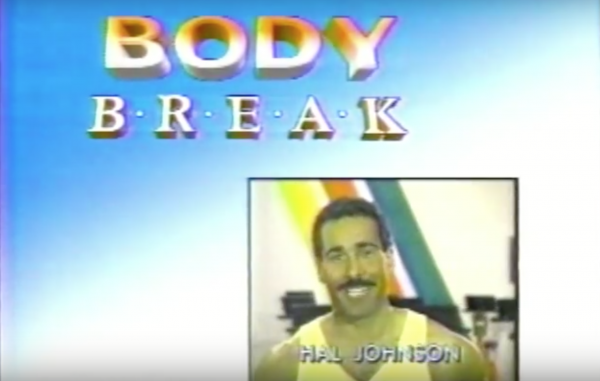 A Canadian physical activity advertising campaign from the late 1980’s. Such projects will not be enough to convince the majority of Canadians to get sufficient exercise if their neighbourhoods do not support activity.

And consider the human cost. According to UK’s Department of Health, inactivity leads to a 16% to 30% greater risk of premature death. If car dependency is a leading cause of inactivity, how many of our 742 new residents in Beaver Bank will die prematurely because task-oriented walking is not option? The number will likely not be 0.

All these people will drive through other people’s communities, where residents will breathe in fumes and fine particulate pollution. Drivers and pedestrians alike will die in car accidents, the 9th leading cause of death in the world. It’s not fair that even people who walk or take transit suffer the health consequences of other people who have been forced to drive.

Single occupancy vehicles are inefficient in their use of space and are expensive to accommodate. 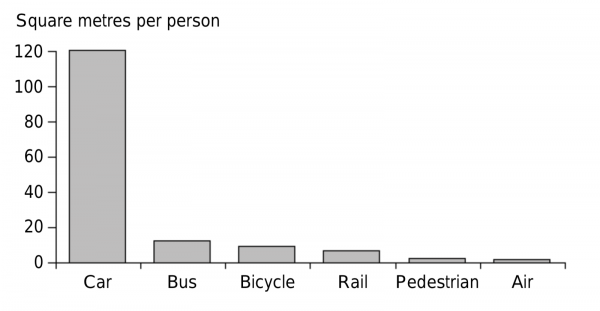 From Banister and Button, Transportation, theEnvironment and Sustainable Development, 1993.

Find this graph hard to believe? Consider this image: 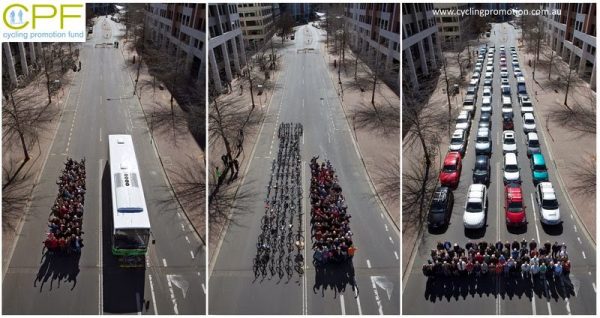 The space needed for 60 people by mode of transportation, from Cycling Promotion Fund.

Our quality of life is better when driving is an option, but how much are we willing to spend on driving being the only option?

If Halifax’s next 100,000 residents need to drive for every task, consider how much more we will have to spend on infrastructure to handle that level of traffic. If just half of their trips can be handled with sidewalks or bike lanes to local schools and business, or by transit, we will save millions.

Stantec Inc found Halifax could save $3,000,000,000 over 18 years by better concentrating growth. The reason is simple: if a property is three times wider, it costs three times more to build pipes and roads to it, to pick up its garbage, to plough its snow, to police it, etc.

Between 1992 and 2014, Halifax’s built-up area doubled in size while it grew in population by only one fifth. For each person, we now all need to pay for far more infrastructure, and for all that space to be serviced weekly. 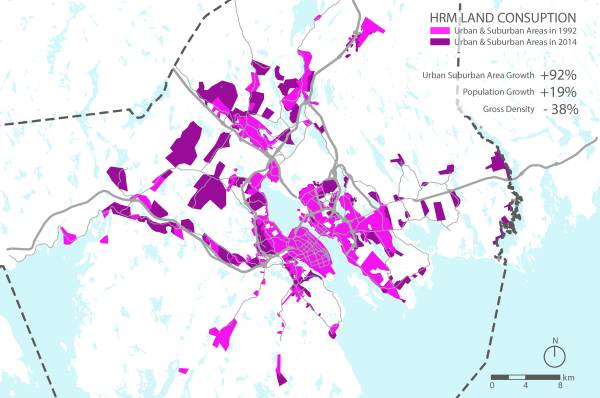 While growth should be making Halifax wealthier, dispersed car-dependent development is instead burdening each of us with greater costs.

Costs to the Environment

Personal vehicle use is the largest direct source of CO2 emissions of Canadian households. There is no mystery how cities can reduce that number:

Fully one third of Canadians do not have driver’s licenses. That number includes youth, the elderly, the disabled, and people too poor to own a car.

What does it say about our attitudes to these people if so much of our growth denies them basic independence? I grew up in a poor family of seven with one car in a car-dependent community. Like me, too many young people have no access to jobs and other opportunities until they leave home. 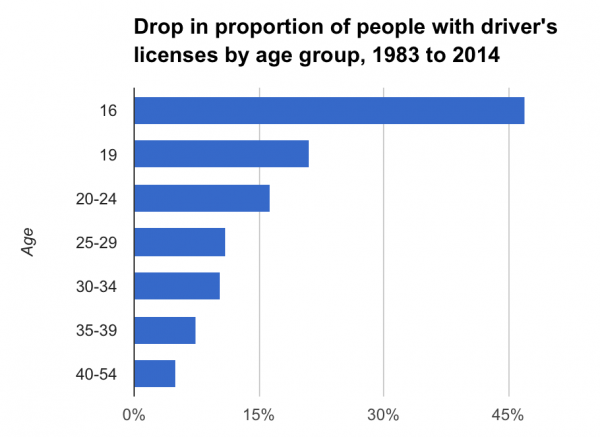 Owning a car costs $9,500 a year on average in Canada. If the design of a community requires a family to own a second car, it can add $237,500 to a 25 year mortgage. The difference makes many homes that seem cheap up-front cost significantly more, in effect, than transit-oriented homes (pdf). That’s why, in part, car dependent home values plummeted during the housing crisis while the value of transit-oriented homes stayed stable (pdf). What would happen to the value of these homes in an oil shock, if the price tripled or quadrupled?

Are home buyers rationally accepting these costs and risks at purchase? Or are some of these costs hidden to buyers, systematically distorting the market to encourage unhealthy development? It’s an empirical question, but it is hard to believe we would have the same Halifax if home-buyers could see the full equation up-front.

The facts about car dependency, inactivity and health are not controversial. What’s controversial is doing anything about it.

Public health initiatives such as Nova Scotia’s Thrive Strategy express the need to build healthy communities that foster physical activity. That much is easy to say, but by failing to directly address the heart of the issue—the construction of places where walking to fulfill practical needs is not possible—these strategies allow the problem to persist.

The attitude of many in government appears to be that while we shouldn’t continue to allow this kind of development, we can’t not allow it.

In fact we can. A piece of land has zero development value unless taxpayers provide it with roads, pipes, and a commitment to service it with garbage pickup, snow ploughing and much more without end. Just because someone happens to own a piece of land does not mean they have a “right” to reach into taxpayers pockets, create an infrastructure liability, and get away with large profits.

That’s why under Canadian law, it is municipalities that decide where subdivisions can be built, not land owners. One of the most decisive legal cases on this issue was actually decided in Nova Scotia, and the outcome was clear: land ownership does not equal an absolute right to residential development. Ontario has used this power to say no to subdivisions in an area nearly the size of PEI.

There are, in fact, many Halifax communities that are actively trying to create attractive local mainstreets where residents will be able to conduct much of their daily business on-foot: Musquodoboit Harbour, Tantallon Crossroads and Village on Main (Dartmouth). We need to support these efforts by directing our scarce yearly growth to such places.

Many people do prefer living in car-dependent places. Happily, we can already offer 10’s of thousands of car-dependent homes, and space for thousands more have been approved. This preference is well-served. Considering the health and cost consequences, however, approving more is unethical.

These words—spoken by a planner representing 265 unit development in Beaver Bank—are no doubt true. But if the health data is correct, car dependent development, whether rural or urban, is indeed bad. In fact, the numbers are clear: it leads to illness and premature death.

We must abandon the idea that it is permissible to build communities where driving is the only option to do anything. We must set new minimum standards for growth so all new communities will be complete communities. A proportion of commercial space should be required within walking distance of homes. We need rules for street layouts that allow people to walk in the most direct way possible to destinations and street-design standards that make walking and biking safe and comfortable. We should require new growth to achieve a reasonable levels of compactness, while maintaining the privacy and space that makes rural and suburban development attractive.

All this raises a question: given the evidence on health alone, how can we continue to accept that car-dependent development is part of professional planning practice? How good does the evidence need to be before we update what we deem ethical?

It is time to set a new norm: the only good development is complete development, where healthy forms of transportation are at least an option.