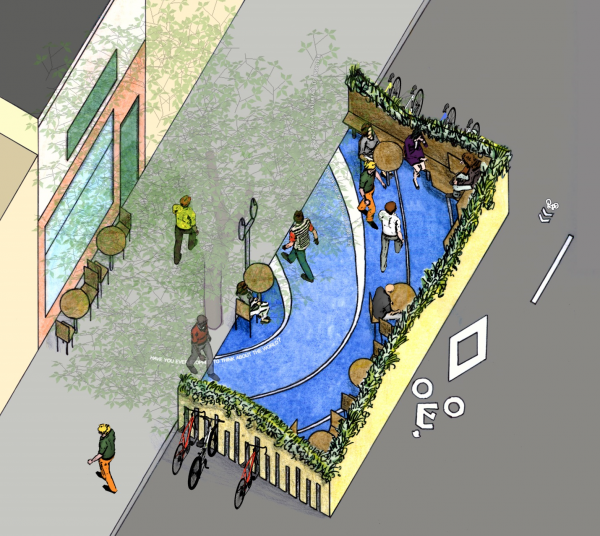 On August 27, 2012 the Edmonton cycling community was shaken by the death of Isaak Kornelsen. A member of the University of Alberta Golden Bears cross-country and track and field teams, Isaak was an avid cyclist and died in an accident while cycling to work at Cafe Mosaics on Whyte Avenue.

In the aftermath of this tragedy memorials popped up to remember and celebrate his life, including a memorial ride organized by the Edmonton Bicycle Commuters’ Society. Meanwhile, a former Golden Bears teammate, Jonathan Behnke, came up with a creative concept to memorialize Isaak through public space. Now a student in the University of Guelph’s Landscape Architecture program, Behnke designed a memorial parklet as part of a school project.

Behnke envisions the Isaak Kornelsen Memorial Parklet, a temporary urban park that extends into the street, to occupy a space in front of Cafe Mosaics. The parklet would take up two parallel parking spaces and half of the adjacent driving lane. Behnke notes that, “By extending into the driving lane, motorists are forced to slow down as they pass the site, signifying that there are other forms of transportation in the area that are of equal importance.” The parklet would also create parking space for 28 bicycles.

A number of design elements within the parklet are meant as specific tributes to Isaak’s life, hobbies and accomplishments. Isaak graduated from Strathcona Composite High School and two pieces from his valedictorian speech are incorporated in the design. The first quote draws pedestrians into the parklet by asking: “Have you ever stopped to think about the world?” The concluding line of Isaak’s speech is also incorporated and is meant to guide people back into their daily lives, saying: “See you out there in the world. I’ll be looking for a waterfall to discover.” Behnke hopes this latter quote will inspire people who experience the parklet be filled with “a renewed yearning to explore and experience the world, as Isaak would have wanted them to.”

Other elements pay homage to Isaak’s successes in track and his love of music. Behnke has designed the parklet’s ground surface as an abstraction of the lanes of a running track. In addition, a tiered bench in one corner can act as an impromptu and intimate stage, where friends can sing or play a guitar.

Vegetation also integrates into the design. By having the vegetation spill over the parklet’s angular walls, Behnke hopes it will encourage people to celebrate Isaak’s life, rather than focusing on his death.

Of his inspiration for designing the parklet, Behnke says, “While honouring Isaak, I [wanted] to create a public space that will give this section of Whyte Avenue a more human scale, where pedestrians and cyclists can feel safe and welcome.” Ultimately, Behnke hopes his vision might one day become reality and stand as a novel example of a public space that embodies the ideals of the young man it tributes.

If you would like to learn more about Jon’s project, he can be reached via email at jbehnke@uoguelph.ca