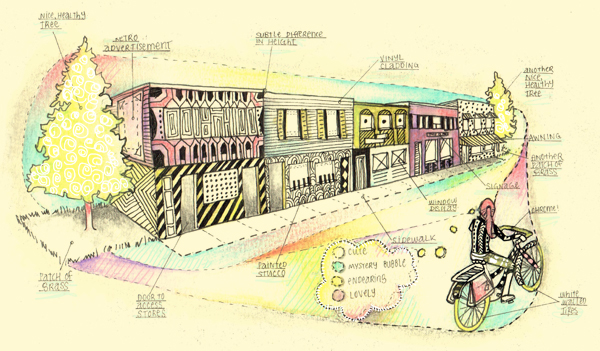 I was eight or nine when my dad brought my sister and I along to run some errands, which included a stop in an Asian shop located in this strange old-school strip mall. I remember the mall being nestled in a residential area, surrounded by houses, framed by a row of trees, and facing a park. Needless to say, I had nearly forgotten this seemingly benign childhood episode – being rather preoccupied by preteen burdens.

One night last year, I rode my bike past the strangeness of the Parkallen community stores. Something about it rekindled my childhood memory of a similar mall, somewhere across the city. In fact, these stores had the exact same row of trees, and faced a similar park. While pedaling by, I couldn’t help but be interested in the strange economic stability of these isolated stores. To me, they seem completely cocooned in residential areas, with no direct access to any main thoroughfares. I biked away from the Parkallen stores, drenched in the orange glow of the streetlights, skeptical about whether I had really witnessed this little urban anomaly.

There are a number of tiny community strip malls sprinkled throughout Edmonton. If strip malls were a species, I’d say that the majority of its members choose to settle along the large arteries of the city, therefore maximizing their accessibility and visibility. On the other hand, the Parkallen community stores and my elusive “Asian-grocery-store-strip-mall” seem to have differentiated themselves from their strip mall relatives by comfortably nestling on the streets of quiet neighbourhoods.

It was late last year that I finally rediscovered the stores that lived, as of yet, only in my memory. Rather accidentally, the strip mall popped up on Google Maps while I conducted a search for moshi. I quickly jumped in the car to actually verify its location (that and to get my moshi of course). In a kind of anticlimactic finale, I turned a corner and the strip mall came into view. The stores were nowhere near as charming as my mind had constructed them to be. In fact, they were nothing more than boxy, vinyl-clad buildings. I parked and made my way towards L&K Oriental Foods & Imports. In my daze I walked away with a mysterious armful of Korean groceries.

Because Edmonton is such a sprawled city crisscrossed by many large thoroughfares, I find the discovery of these hidden residential-area stores to be especially endearing. Hopefully I will one day wander through a new neighbourhood and find yet another row of houses broken up by a long, low-slung form of architecture: the elusive residential strip mall in its natural habitat…