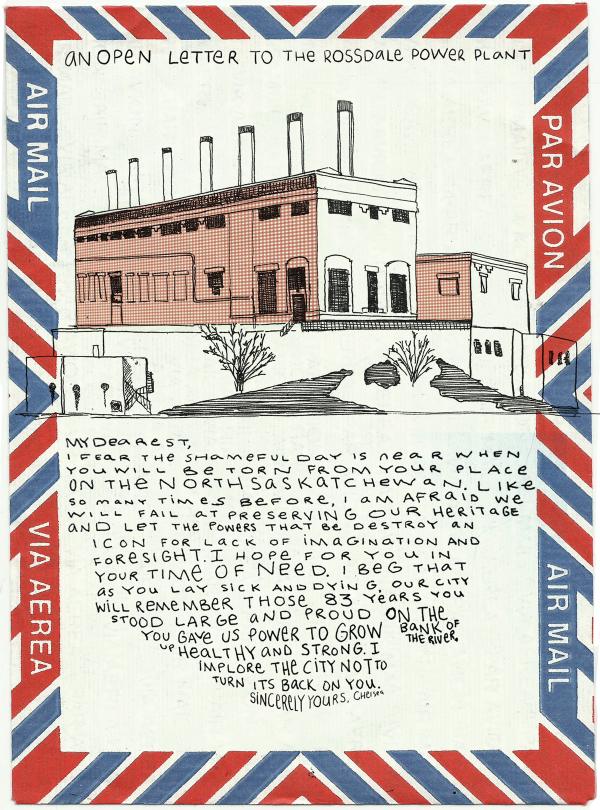 The Mayor has threatened that it may ask the province to remove the Historical Designation (for the second time) on the Rossdale Power Plant. It’s an imposing yet beautiful piece of architecture, a landmark of Edmonton, and a symbol of the growth of the city as we know it.

It would cost only $7.4 million to stabilize and maintain the complex of buildings, which have minor structural issues, plus 87 million dollars to save and later repurpose the plant into one of many fantastic visions already developed and studied. Meanwhile, the city has just announced that it will fund a 35 million dollar gondola from downtown to the Rossdale Community?! Maybe I’m just cynical, but it sounds to me like a certain someone wants waterfront development, and thinks this old thing is in the way.

Please pass this on if you care about this building’s fate. Tell your Councillor how you feel, and consider joining forces with the Rossdale Regeneration group who meet next at the Rossdale Community Hall (10135-96 Ave) on April 24 at 6 pm.

Commonplace celebrates quotidian life on the streets of Edmonton and fosters a collective sense of belonging to the here and now. Chelsea Boos is a multi-disciplinary visual artist, designer and founder of Foolscap Studio. When she is not drifting through the streets of Edmonton in search of her next subject, she can be found making the city more beautiful through art and design.