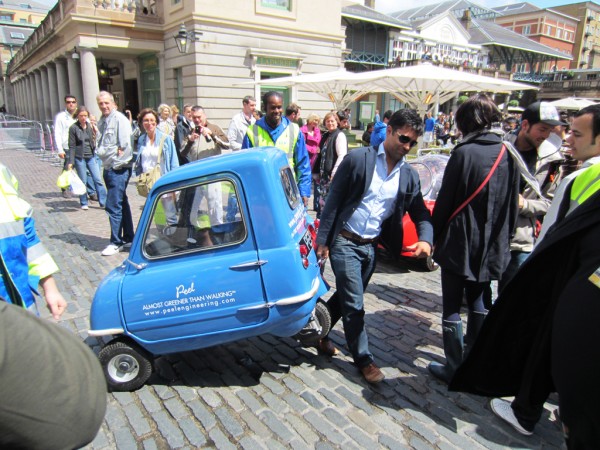 For those of you who know me even remotely, you know that I don’t like cars. I’m talking pretty much everything about them: car culture, car ads (ESPECIALLY car ads), the way they look, the way they feel, driving them, the whole kit and kaboodle. My ears and eyes immediately zone out. Classic example: one time a friend came to pick me up at my place and I saw the white car out front, opened the door, got in. Turned to face the driver. Not my friend. Yup, I got in the wrong car because to me a white car is a white car. Audi what? I actually get angry at the time I must waste flipping through pages of car ads to get to the interesting stuff.

So, I was just listening to Q on CBC radio and one of the topics they discussed was how the auto industry gets women wrong. HA! That’s an understatement. But it got me thinking. If you want to design cars for women (i.e. 50% of the current adult population) YOU SHOULD HIRE WOMEN TO DESIGN THEM. And not just any women, but women who currently loathe cars. Women who would rather ride a bicycle. Women who would rather walk. Women who can’t tell the difference between a white Audi and a white Rabbit not because we are stupid but because we are so bored by them that we don’t care. I don’t actually know if a “Rabbit” is even a brand of car or a car style! I might be spelling Audi wrong! Secretly, I kind of hope I am. We are at the far extreme end of a demographic you can’t reach, that will spend thousands of dollars having a custom bookshelf built for their studio apartment, has a driver’s license, lives in freaking oil-central Alberta for godsake, but – yes – still doesn’t own a car. They say you should design for the extreme ends of your demographic, and … yup, just checked, that’s pretty much me.

No gas, no ugly gas stations! First of all, my perfect car (obviously) wouldn’t run on gas. You’d think it’s because the gas industry is dirty and bad for the environment – which it is – but my distaste for it runs deeper than that. First of all, gas smells awful. Noxious. Also, the place you have to buy it is awful: gas stations contain all the same elements that I dislike about fast food restaurants. You’d think I avoid fas food chains because of the food, but really I avoid them for their cheap, boxy design that supposedly says “fast and functional!” but really just says “obnoxiously bright and ugly”. Fluorescent lighting in the stations, the dingiest bathrooms you’ve ever seen in the great nation of Canada. No shelters from the wind and rain while you’re paying/pumping… seriously, gas stations within themselves are depressing enough to make me not want a car.

The perfect world would have my bath water drain directly into my car’s tank, running through my dishwasher and laundry machine along the way. This would also give my car and the roadways a lovely, fresh tangerine scent that pedestrians and urban folks would greatly appreciate. Old gas stations could be transformed into urban cafés until they’d detoxed long enough to become urban gardens.

Also, in view of water conservation and tank size, surely our wizardly engineers can come up with some way to give us double the mileage on tangerine water, with a tank half the current size? Because the second thing on my Perfect  Car list is…

The tiny, foldable car with titanium strength. Part of my issue with cars are their huge, lumbering size and weight. Especially in North America: so ridiculously large and unwieldy, and difficult to park in urbanized areas. Part of what I love about my bicycle is that it’s so manageable. I can pick it up. I don’t know why that’s so important to me, but it is. My perfect car would have the size, cuteness and light weight of an old Austin Mini, with the unbendable strength, durability and lifespan of titanium. It would also be foldable, so that (to park) you only need fold it to half its size in a few easy, smooth steps (car companies, if you’re looking for inspiration, check out this space saving foldable furniture). Parking stalls could be reduced to scooter-size, meaning more people will be able to find parking, less cursing and driving around searching for parking stalls, more business for downtown restaurants and stores, etc. It also means I could fold up my car and park it at a bike rack in a pinch, or store it in my basement when not in use.

Speaking of bicycles… cars are not great exercise. I’m just saying, maybe a Flintstone-esque pedaling option would be nice when you need to get some cardio in during a longer commute. It would also help save on tangerine water.

Get rid of the glare! Really, we can come up with non-glare eyeglasses that are practically invisible, but for some reason car windows still reflect midday sun like alien death rays. Also, what is up with how REFLECTIVE cars are? Who made THAT fashion decision that’s survived through the ages?? Being able to SEE is perhaps the most important thing while driving, but every car on the road is a shiny, metallic surface that reflects light directly into your eyes, ready to blind you at the most inopportune moment. Their glare gives me headaches, both sitting in cars and walking by as a pedestrian. My perfect car would definitely be matte (it’s like we’re all driving around the fashion equivalent of this every day, and are delusional enough to think it looks good. Seriously.).

Pleasant textures. My perfect car would have the nice, soft feel of a brushed cotton shirt.

REAL horse power. Now, if you ask me (which no one did) I would not say that the real power of a horse is in its speed: I would say real “horse power” is in its trainability and brains. Ye old cowboys could whistle and have their mode of transportation trott right up to them. A horse could also neatly avoid obstacles in their path (such as streams and fallen tree branches) without any prompting from their master. I was so excited when I first heard that a SMART car was coming out. Finally! A car that comes to me when I whistle and can avoid obstacles and park itself!! Oh. How disappointing. It’s just a smallish, ugly, shiny car. That doesn’t run on tangerine water.

There are so many other things I would want such as a purse console and woman-sizing (this Q radio episode covered both of these topics pretty well). But perhaps this is enough for the car industry to absorb for now. ALSO you guys should hire me for a few weeks to pick my brain for great ideas – yes, car designers and companies, I’m talking to you. Trust me, there’s more where this came from. If I see a car in the future that folds in half and smells of tangerine I’ll know whose blog you were reading in 2013 (although in terms of foldable designs, these guys are off to a good start).

In the meantime – I guess I’ll keep riding my 1940′s bicycle and spending my money on lattes and bookshelves.

Sarah Jackson is an Edmonton-based illustrator, designer, thinker and strategist. When not coming up with fantastic design ideas for clients or musing about how to make cars less objectionable, Sarah can be found creating stories about jam and peanut butter, which she vends at the Royal Bison Craft + Art Fair, and the Art Gallery of Alberta.