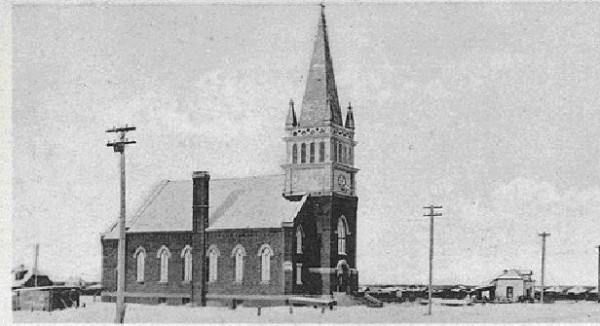 Last week Edmonton City Council received a report detailing plans for Church Street- a small corridor within the McCauley neighbourhood up for municipal heritage designation. This report to Council is the result of a special planning study by the Urban Design Unit at the City of Edmonton and the acknowledgement of the significant heritage value of the street in a recent planning study  – The McCauley Alberta Avenue Historic Resources Inventory prepared by Urban Systems.

The report contains several recommendations for both long-term and short-term projects brought forward from numerous consultations with the community.  These projects offer a tremendous diversity of ideas to help bring the street back from a period of decline.  The ideas include a Christmas Festival, new street lighting, community art projects and a proposed a multicultural teahouse.  Foremost among all of the plans is the willingness to celebrate the neighbourhood’s historical significance. 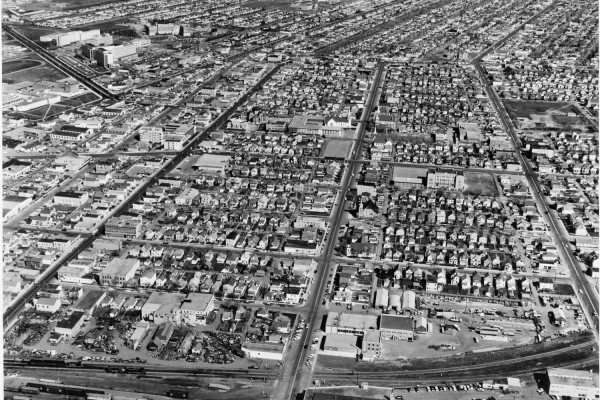 Church Street (seen here in the 1960’s) boasts an unusually high density of purpose-built Christian Churches – a total of 13 neighbourhood congregations. These parishes are architecturally, historically and culturally significant as testaments of role of spiritual life in creating a sense of place at the northern frontier.  As a collection, they represent the successful co-habitation of an astonishing diversity of religions, ethnic and cultural groups as well as their evolving presence in Edmonton.  Church street offers a unique example of a linear clustering of small neighbourhood parishes.

The clustering of neighbourhood parishes although not uncommon is virtually unseen before in Canada in this scale and formation.  Almost all the churches were built and re-built over a period of approximately 20 years at the turn of the twentieth century.  Given the limited availability of resources, they were originally built modestly according to a standard timber-frame model, a front-facing gable roof with milled wood siding.  They demonstrate minimal detailing and sometimes exhibit gothic arched windows.

96 Street (formerly Kinistino Street), and now to be officially renamed ‘Church Street’, was the street of choice for small neighbourhoood congregations in Edmonton as it was ideally located between the busy Namayo Street (now known as 97 Street/Chinatown) and the McCaluley residential neighbourhood.  According to the to the City archives, the first congregation to locate on the street were the French Roman Catholics at the Immaculée Conception, the sister parish of the earlier St. Joachim which was re-built from its original site at Fort Edmonton. 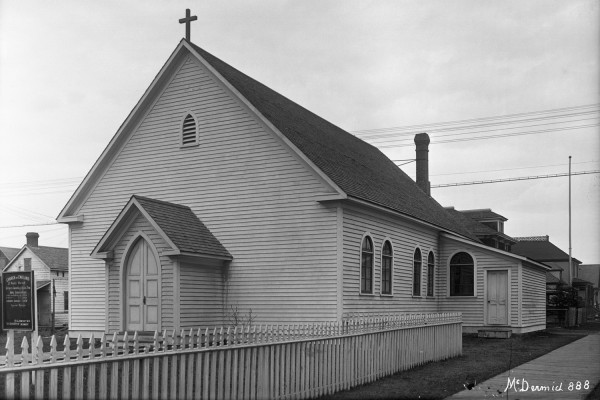 By the end of construction of the Immaculée Conception in 1905, two other congregations would be located on the street: the Grace Methodist (now The Family Worship Church) at 106A and the St. Paul’s Anglican Church (formerly St. Stephens’s and now an Architectural Office) on 109.   The Catholics, Lutheran and the Orthodox groups grew tremendously over the next 10 years to hold many different language services under a single roof.  In the case of the Immaculée Conception, the congregation expanded to accommodate the Irish, Italian and Ruthenian Catholics groups, all of which held services at one point or another in the small Church.

Early depictions of the Immaculée Conception show a Ruthenian Catholic wood-frame church built at the back end of the property.  This small Ruthenian Catholic Church would become St. Josaphat’s Basilica, now a Provincially Recognized Heritage Site.  Across the street, there is Sacred Heart, the Irish Catholic Church also born from Immaculée Conception and now a First Nation Catholic Church with a variety of cultural and faith-based social services.  Further down the Street is St. Barbara’s Orthodox Church, also a Provincial Heritage Site and historically associated with the Canadian Holy Trinity Orthodox Church, a breakaway from the Moscow Patriarch located across the street from St. Paul’s Anglican Parish on 109.  The Holy Trinity Orthodox Church occupies what was Edmonton’s first Seventh Day Adventist Church built in the 1920’s in a modest interpretation of the American Federal Style.  Today the French Immaculée Conception itself is known as Mary Queen of the Martyrs, a Vietnamese Catholic Church. 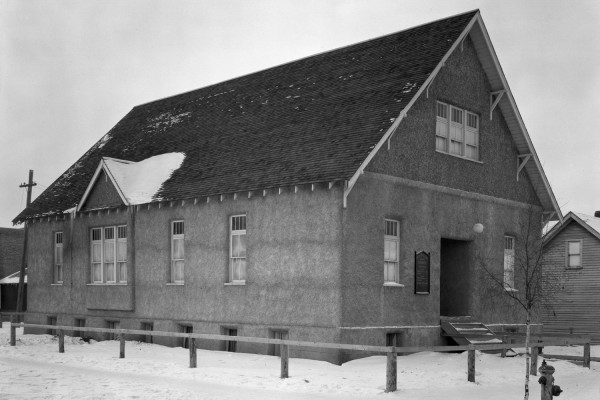 Over the years some of the neighbourhood parishes have individually gained either Provincial or Municipal recognition.  The history from the standpoint of the neighbourhood reveals the tremendous inter-woven history of these congregations.   The congregations have similar historical and cultural narratives that continue to evolve with the changing needs of McCauley.   Almost all of the original wood-frame gable roof structures were re-built to reflect particular architectural styles, traditions and aspirations of their congregations.

Edmonton’s Historical Board has recognised the street as a ‘historical resource’ and has placed all of the Churches within the proposed ‘heritage area boundary’ on Edmonton’s Inventory of Historical Resources where they will potentially qualify for restoration grants and municipal protection.  Council has also committed $500 000 to short term upgrades. 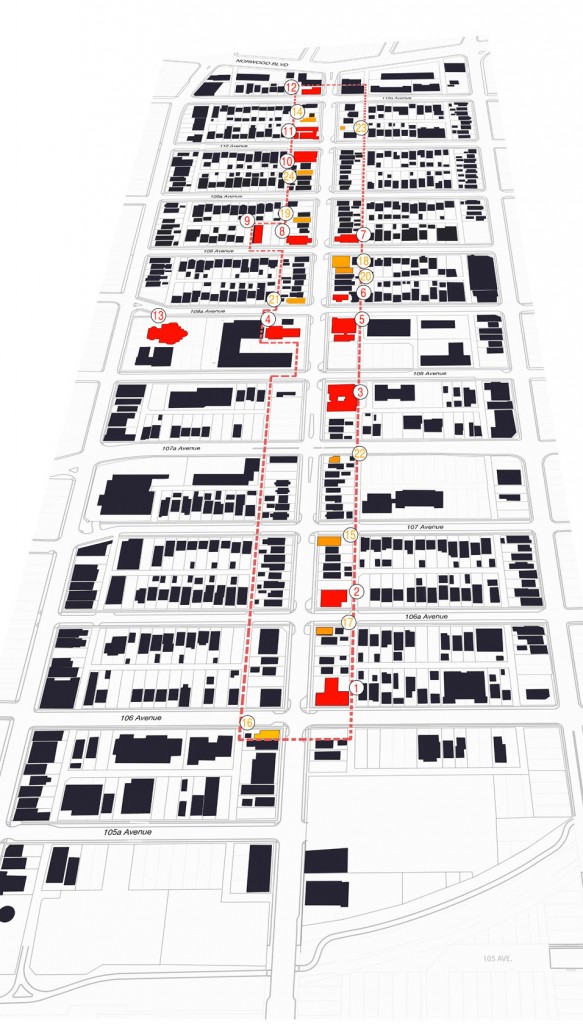 View of Proposed Heritage Area and Heritage Properties Adapted from the City of Edmonton’s McCauley Open House. Religious buildings are indicated in red.

The area boasts tremendous cultural narrative, and it is only a matter of time before Provincial and National recognition ensues as later on this month, Church Street will be thematic focus of a national architectural conference.  The Society for the Study of Architecture in Canada, a group that has built up expertise in evaluating the significance of sacred space and intuitions in the development of Canadian cities, will be hosting its annual conference in Edmonton from May 28th– June 1st.

In light of this important event, Spacing Edmonton will produce a unique series on the pioneering history of its early congregations along 96 Street.    The series will cover the social, cultural and architectural features of these institutions and highlight their contribution to the City’s cultural development.