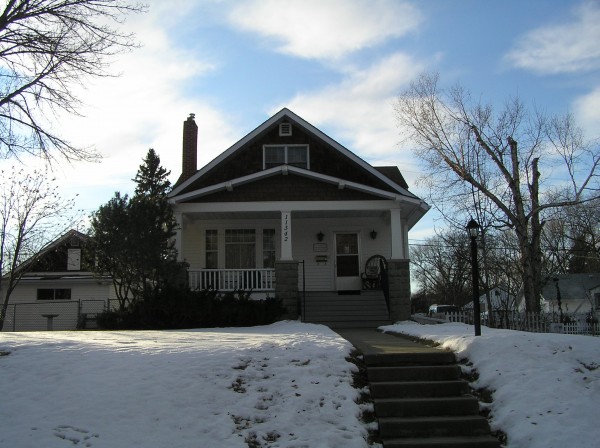 Over 100 years ago, one of the most important figures in media and communications theory was born in Edmonton. Herbert Marshall McLuhan was a young boy when he and his family packed their bags in 1915 and moved to Winnipeg. He grew to have a long, successful academic career, coined the phrases “the medium is the message” and “the global village”, and also is said to have predicted the World Wide Web 30 years ahead of its invention. He is also purported to have held Edmonton near to his heart and attributed his time here to shaping his intellectual life even though he spent most of his career in Toronto.

In 1993, his family’s home, built  in 1912 for $3,000 in the Highlands neighbourhood (11342 64 Street NW), was added to Edmonton’s Inventory of Historic Resources. In 2012, the City of Edmonton provided the Edmonton Arts Council with $75,000 to serve as a down payment to purchase the $475,000 residence. Arts Habitat Edmonton has repurposed the property as a “contemplative centre for arts and ideas.” The house hosts a studio, artist offices, meeting spaces, and a new version of the McLuhan TV Wall.

On July 17, 2013, the Marshall McLuhan House received designation as a Municipal Historic Resource, protecting it from demolition and ensuring that alterations, rehabilitations, and renovations respect the historic character and integrity of regulated portions of the building – namely, the exterior façade. Designation also allows the owner to apply for funds from the city to assist with rehabilitation work. As part of the designation bylaw passed by council, approximately $65,000 in rehabilitation work is slated for this building. Half of this work will be funded by the city through the Heritage Reserve Fund.

This is a huge victory for heritage in Edmonton. Edmonton is quickly becoming a hub of creativity and connectivity. This should come as no surprise considering the first home of the global village is in our own backyard.