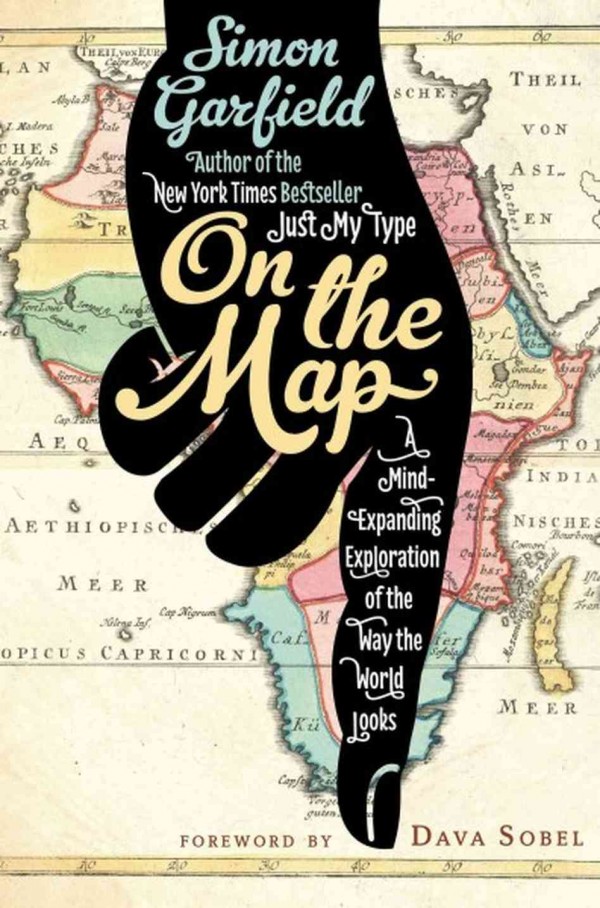 On The Map: A Mind-Expanding Exploration of the Way the World Looks
Author: Simon Garfield, (Gotham Books 2013)

Mapmakers have both an unyielding curiosity around–and implicit dislike for–empty spaces. Absent reliable information, a combination of hearsay, rumour and imagination would often fill these blanks with mystical lands such as the sunken kingdom of Atlantis or fantastical creatures like the mythical king Prester John. Off in the furthest corners, some would simply scrawl ‘Here Be Dragons’, cautioning the intrepid traveler from venturing too far from the “known” world.

The sheer desire to know what’s out there has always been a driving force for explorers, pushing them to lofty and sometimes deadly extremes. For every Marco Polo who traced the Silk Road from Venice to the court of Kublai Khan in Cathay (China) in the 13th Century, there are tragic tales like that of British explorer Robert Falcon Scott and his doomed expedition to map Antarctica in 1912. Far less altruistic notions of territorial acquisition, religious proselytization and simple greed have also cast dark shadows across the world’s unknown spaces, such as during the “Scramble for Africa”, when European empires quite literally divvyed up the heretofore unknown “Dark Continent” amongst themselves in the late 1800’s.

On the Map isn’t a comprehensive history of mapmaking, even if cataloging something so universal to human curiosity were even possible, nor does it do much to explain the physical process of cartography, enabled by cool-sounding tools like sextants or astrolabes. But when you realize British-born Garfield has written a dozen subject-driven narratives such as “Just My Type”, then you know the book best reads as an anthology of stories (picture Richard Attenborough whispering a stream of meandering yet charming anecdotes in your ear).

Along the way we delve into some unexpected historical anecdotes.

For instance, we now take it for granted that the Vikings were the first Europeans to reach North America when they landed at L’Anse aux Meadows on the coast of Newfoundland a millennium ago. But it wasn’t until a number of cartographic experts pored over the “Vinland Map” with a cloak-and-dagger level of secrecy in the 1960’s that this was finally confirmed, much to the ire of Christopher Columbus fans everywhere who claimed their man as the first to cross the Atlantic in 1492. However Garfield unfortunately omits the story of Chinese eunuch admiral Cheng Ho, who may have crossed the Pacific to California seventy years before Columbus, but he does delve into the state’s fascinating career as a reported island during those early years of trans-oceanic exploration.

In other cases, cartography led to crucial advances beyond just finding one’s way. It was only when an English physician named John Snow traced the fatalities from a cholera epidemic in London in 1848 to a single water pump that the science of modern epidemiology and sanitation began. Incidentally, the most reproduced map in the world? The London underground subway system, a marvel of information legibility. We also learn why most maps of the world are wrong (due to the outdated Mercator Projection) and that some of them have been fought over, ignited wars and are secretly trafficked in a small (and presumably not overly exciting) black markets.

Garfield moves into future of mapmaking, looking at video games like Grand Theft Auto, the Apple maps debacle and Google’s efforts to map the world’s trees as well as its cities. He also takes a stab at the culture of map making, such as the old sexist canard that women can’t read maps the way men do. This may actually be partially correct: “Although women have no difficulties with navigation, the way they are told to navigate may be at fault.” Maps, it would seem, say as much about the reader as they do the cartographer.

Sam Singh is a journalist, filmmaker, business incubator, history buff and urban enthusiast. He has an MBA from the Rotman School of Management and an MJ from Carleton University.