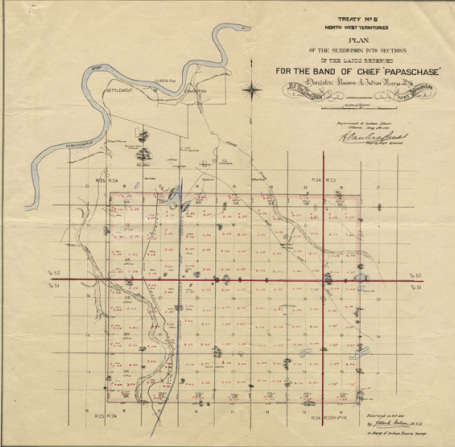 Boundary of the Papaschase Indian Reserve under Treaty 6.

To relocate the Métis-Cree away from Fort Edmonton and the highly-valued North Saskatchewan River, negotiations were made to create the Papaschase Indian Reserve in 1877. Band members died of starvation due to buffalo depletion, others took Métis scrip, and some joined the Enoch Band (which, interesting to note, had access to the river). Shortly after in 1888, it became the first reserve to be surrendered to the federal government for immigrant settlement.

As a reminder of a cultural landscape where Edmontonians continue to benefit today from the reserve system and its complicated past, neighbourhood names in South Mill Woods are Cree in origin:

The Cree names in south Mill Woods, such as Meyonohk and Kameyosek, are examples.

“The developers argued strongly, saying it was just not marketable,” said Mooney.

“They said, ‘You’re giving us names that nobody can remember; they don’t know where it is. We want to name them Pretty Valley and Big Trees. ‘ ”

These days, developers rarely, if ever, get refused by the naming committee.