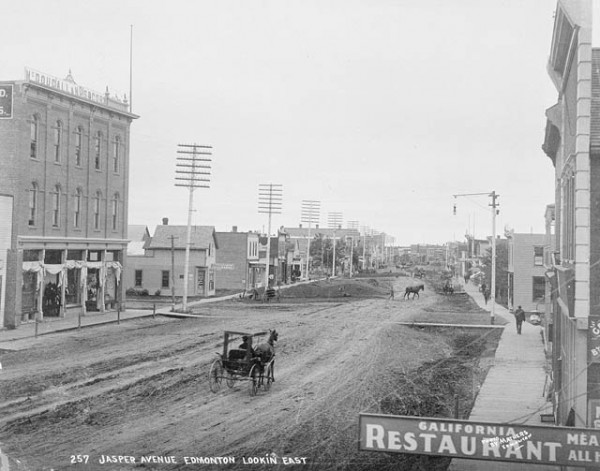 Editor’s note: this post has been updated from its original to add detail.

People often point to Jasper and Whyte as unfortunate cases where planners and transportation engineers designed a street focused solely for the automobile. And indeed, the streetscapes, especially around Oliver’s Jasper Avenue, can be car-oriented with its limited pedestrian crossings, wide turning radii, fronting parking lots, and high speed traffic. However, it would be incorrect to assume that the road width of these seven lane arteries were a direct result of poor planning. The widths were already determined during the aggressive settlement of the West, long before the car became commonplace in Canadian cities. 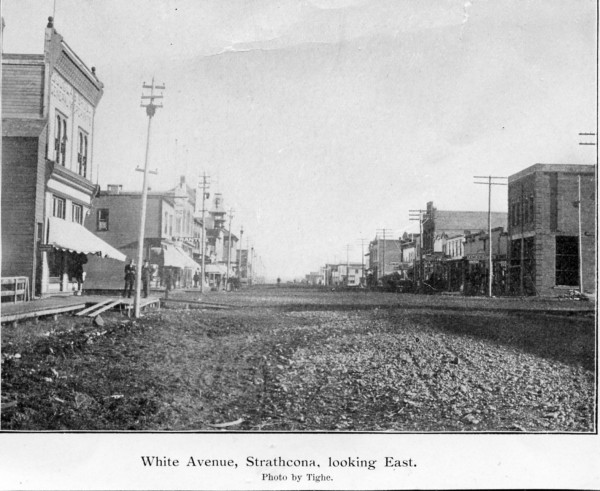 In order to assert sovereignty over the Prairie Provinces, Canada obtained land title from the First Nations so that the vast land could be subdivided for colonization. The federal government envisioned the prairies to be heavily focused on agriculture and planned to impose a structured grid to cut up the potential farmland, known as the Dominion Land Survey system. This system, implemented in Alberta from 1880 onward, split the land into townships and further divided them into 36 sections. It also prescribed a minimum road allowance of one chain (66.5 feet or 20.1 metres) between every section for north-south roads and every two sections for east-west roads. This road allowance was seen as a desirable minimum width to accommodate a herd of cattle, but did not necessarily require a road to be built. This became the standard width for most roads in the new cities across the Canadian west.

Streets intended to be major commercial thoroughfares, however, were often laid out wider than a chain to accommodate a diverse range of users and activities, from delivery wagons, stage coaches, pedestrians, cattle, utilities and new transportation technologies such as the streetcar, which were proliferating across North America at the time. Jasper Avenue has a width of 30.5 m (approximately 100 ft or 1.5 chains) throughout Downtown and Oliver. Subtracting sidewalks, this has resulted in 7 lanes of traffic for most of its length today. Whyte Avenue is similarly broad, reflecting its original purpose as a main street for the Town of Strathcona. This phenomenon of the seven lane main street is also observed in Saskatoon’s Broadway Avenue or Regina’s Victoria Avenue.

But streets like Jasper Avenue, which started as unpaved dirt (or mud) corridors, did not originally have lanes at all. A street in 1900 was a dynamic, multi-purpose space, not just for movement, but also for social interactions and commerce. As car ownership began to rise through the 20th century, however, the mixed space of main streets gradually became more controlled, segregated and automobile focused. Sidewalks, originally intended to provide a refuge for pedestrians from the mud of the street, became places they were no longer permitted to leave due to the danger of motorized traffic. The generous widths originally intended to accommodate all sorts of activities rapidly gave way to a wide expanse of pavement devoted to swiftly moving vehicles, and a relatively thin border of sidewalk for everything and everyone else. 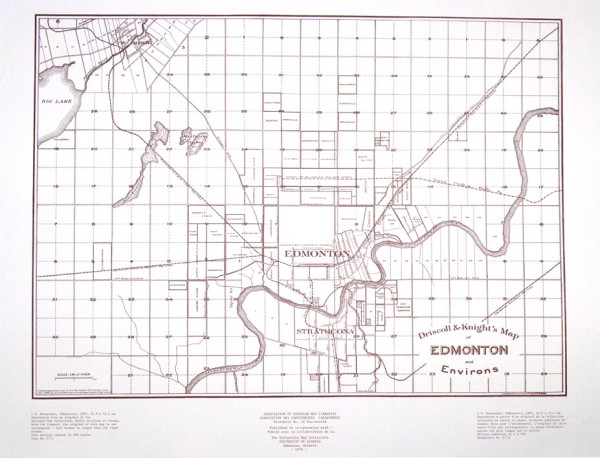 Sectional grid based off the Dominion Land Survey in the Edmonton region. Note that pre-existing river lot configurations in Edmonton, Fort Saskatchewan, Strathcona, and St Albert were exempted.

So, are we doomed to be car-oriented due to these road allowances? Certainly not. Because of these wide rights-of-way, we can potentially build great transit infrastructure for the inner city core without needing to acquire too much private land, demolishing significant buildings, or resorting to expensive underground systems. Similarly, the City has already planned to enhance the pedestrian experience by creating five metre wide sidewalks for the length of Jasper Avenue in Downtown proper. Let’s not miss such opportunities as the city’s urban form continues to transform. 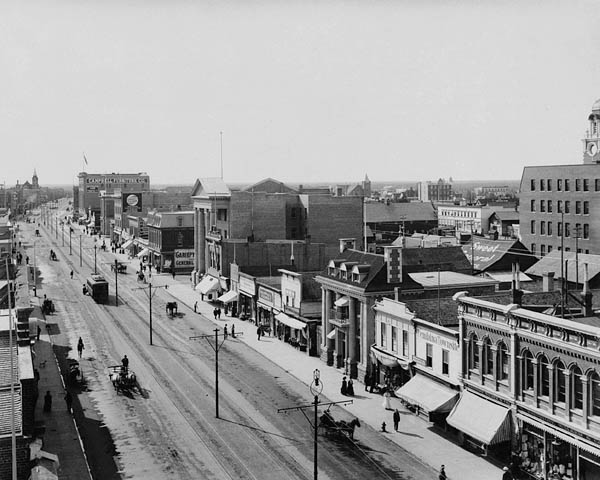