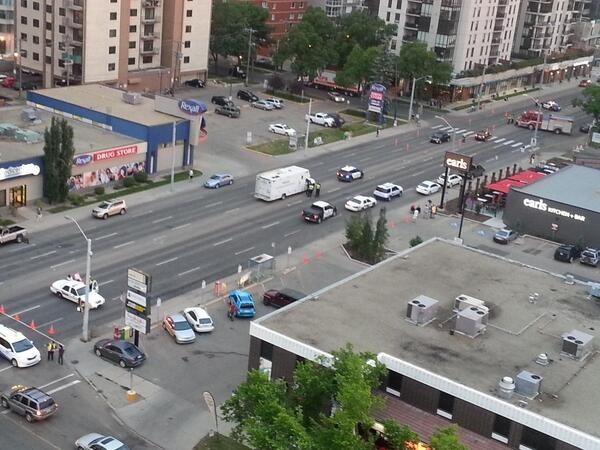 Originally published in the winter 2014 issue of The Yards. Written by Tim Querengesser.

Ask the employees of Earls Tin Palace and they’ll tell you the crosswalk connecting Jasper Avenue and 119 Street is dangerous. Though it bridges the restaurant, a Starbucks and other amenities in the city’s two densest communities, Jasper, the city’s signature avenue, is also a main transportation corridor. About 1,200 cars, busses and motorcycles tear through it each hour—about 30,000 vehicles per day. Despite that, the crosswalk is poorly lit and uncontrolled.

For more than five years, Oliver Community League representatives and former Ward 6 councillor, Jane Batty, voiced concerns about the crosswalk with the City of Edmonton. Then, in 2012, crosswalk safety guidelines, defined not by the City but by the Transportation Association of Canada, were updated for the first time since 1998. As a result, City engineers re-examined all crosswalks for compliance, including the one at 119 St. Based on its proximity to light-controlled intersections, the number of vehicles and pedestrians and the larger-than-standard signage, Edmonton’s director of transportation engineering Craig Walbaum concluded that it was safe.

Yet last July, just before 9 p.m., a 19-year-old Earls employee stepped into the crosswalk and was struck by a black Nissan Altima. She was critically injured, later slipping into a coma, but survived.

A report to council on crosswalk safety from the City’s Transportation Department was already in the works, but the public response prompted Mayor Don Iveson to push for more. “Any time someone is seriously injured and there’s repeated incidents, repeated calls from the community league, from the public, then I think it merits a second look,” Iveson told the Edmonton Journal. When CBC later polled people about the most dangerous intersections in the city, five of the 22 intersections highlighted were along an 11-block stretch of west Jasper Ave., including, of course, the 119 St. intersection.

All the crosswalks along the Jasper Ave. corridor are now under review, Walbaum told me last August. His department is also trying to pinpoint where the highest use of pedestrian traffic is today, with an eye on future residential hubs like the Pearl. There might be upgrades of existing crosswalks, he said, or even relocated or combined crosswalks.

I walk along Jasper Ave. daily and have nearly been hit while crossing it at the 110 St. intersection, which is controlled with a dedicated stoplight. Moving at the 50-kilometre speed limit, I’d have 45 per-cent chance at survival had the minivan hit me, according to the City’s statistics.

At the moment, the City’s main source of feedback on crosswalks is complaints. But, Walbaum told me, the city already struggles to manage the volume of crosswalk safety complaints that it receives. “We’re on track to have about 1,000 inquiries [this year],” he said. The majority are pedestrian concerns, requesting for more reviews and even more crosswalks.

Despite the clear public demand for improved safety, there are no public meetings about Jasper’s crosswalks planned. That’s the issue.

During our conversation, Walbaum and I mostly disagreed on our views of street design. To Walbaum, the crosswalk where I had my close call is a gem. After all, it has the highest level of control possible: a red light. But to a driver, that red light still exists along Jasper, a road with six lanes, whose very design suggests it is a space exclusively for speed. To a walker, crossing a thoroughfare of that size, where vehicles regularly exceed the 50-km-per-hour limit, can be a nerve-racking experience, light or no light.

We’ve seen the differences road design makes nearby on Capital Boulevard, thanks to sloped sidewalk curbs and other speed-calming features. Moving a crosswalk here, adding a light there isn’t enough. We should place pedestrians on equal terms with cars—by rethinking the design of Jasper Ave. itself.

Tim Querengesser (@timquerengesser) is president of The Edmonton Wayfinding Society. He has written for Atlantic Cities, The Globe and Mail and Alberta Views.