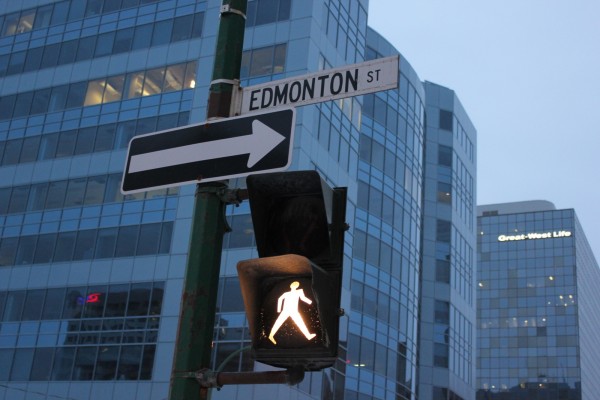 There’s a little bit of Edmonton in Saskatoon and Smithers, Gatineau and Guelph. In a trailer park in small town Michigan and an exclusive gated community near Atlanta. Along the River Clyde in Glasgow. In Johannesburg, Columbo and Berlin. Not everywhere, but far more places than you’ve imagined.

There are, in the world, five settlements named Edmonton. The first, an area of London 13 km north of the Thames, already had 87 households when the Domesday Book documented it in 1086 as Adelmetone (“farmstead or estate of Ēadhelm”). A second dates from 1795 when the Hudson’s Bay Company built a fur trading fort on the North Saskatchewan River and named it after the British original, which was the home of both the Deputy Governor of the HBC at the time and an apprentice who was one of the outpost’s first residents. A third Edmonton is a community of about 1,500 people in Kentucky. It was named for Edmund Rogers, a Revolutionary War veteran who settled in the area in 1800, meaning we have creative spelling to thank for its similarity to the others. Edmonton #4 is a suburb of Cairns, Australia. It was established as a railway station in 1911 and is assumed to have been named after Edmonton, UK. The final Edmonton is a tiny hamlet in Cornwall county, England.

Living in a city where the streets which aren’t numbered are generally named after people, I had never thought about the dispersion of place names through street naming. On a recent visit to Winnipeg, however, I stayed at a hotel near Edmonton Street. I decided take photos along it, and as I did, I asked myself, where else are there streets named Edmonton?

The answer surprised me. With the help of Google Maps’ Place Autocomplete feature I found dozens and dozens of them – 145 in fact – in eight Canadian provinces, 23 US states and five continents.

I’ve located these streets on this map. (If you know of any ones I’ve missed, let me know in the comments.) The colour of the pins reflect which Edmonton the roadway is known or assumed to have been named after. Street naming is notoriously poorly documented, so the map includes a number of orange pins showing street names we may never be able to identify the origins of, or which at least would require some determined digging. But in many cases we know or can reasonably guess where the name came from.

All of the Edmonton streets in Canada are named after our Edmonton. Those on the prairie mostly date from the settlement era. Winnipeg’s is the earliest, named in 1876 as part of a subdivision with street names recognizing HBC outposts and personalities. Three towns in Saskatchewan – Broadview, Ernfold and Rocanville – got Edmonton streets as they sprang into existence with the westward extension of the railroad. The Edmonton Trails in Calgary and Airdrie are remnants of the route established by the Northwest Mounted Police to Edmonton, then the regional hub of commerce and communication, after they built an outpost on the Bow River in 1875. Edmonton Street in Prince George is part of the City Beautiful subdivision with street names honouring other communities along the Grand Trunk Pacific Railway line. Streets named after Edmonton in eastern Canada are of a later, mostly post-war, vintage. Four of them are on existing or former military bases (Trenton, Bagotville, Miramichi and Happy Valley – Goose Bay). 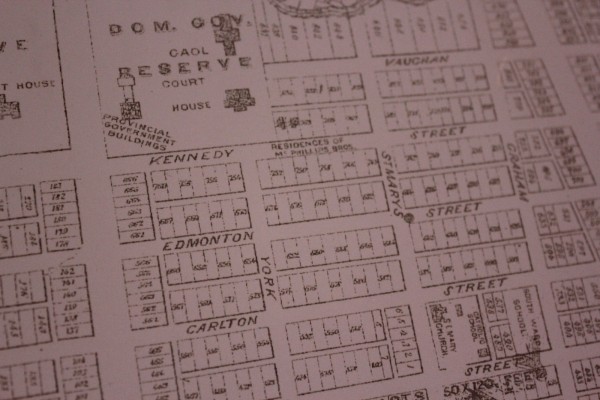 Americans have named at least 30 of their 81 Edmonton streets after the city on the North Saskatchewan. Most of these are in subdivisions with a Canadian naming pattern – the reason it’s easy to tell what they were named for. Our country’s larger cities – Montreal, Ottawa, Toronto, Vancouver, etc. – are frequently included with Edmonton in representing Canada to the people of these areas, but smaller places like Creston, Devon, Stettler and Welland are also acknowledged. As one might expect, Calgary is Edmonton’s most frequent partner in the American maple leaf neighbourhoods.

The Edmonton name also appears in the United States in recently-built communities with street names suggestive of old England. Here Edmonton is an agent of exclusivity. These subdivisions tend to be much more affluent than those with a Canadian theme. Several are gated; luxury houses abound. The irony is that the British Edmonton is one of the poorest areas in the UK.

The United States’s newer Edmonton streets, whether Canadian, British or of unknown origin, tend to be in the Sunbelt where so much of the suburban development of recent decades has occurred. There are six in Texas, seven in Florida and 14 in California. One is located within view of the LA Forum, where Wayne Gretzky played after leaving the Oilers.

The oldest urban Edmonton streets in the U.S. are in the Great Lakes area. Rochester’s was first listed in the city’s directory in 1925. Cleveland’s is lined with grand duplexes dating from about 1920. The most fascinating is in Detroit. A map from 1915 shows it as being very new at the edge of the city. Originally only 200 m long, it was violently severed through the construction of a stretch of Detroit’s last freeway that opened in 1971. Only three buildings remain amidst the vacant lots we have come to associate with Detroit: two houses (one abandoned) and a derelict brick six-storey warehouse. Was this monument to urban disintegration named after Edmonton, Alberta? I think so. In the area surrounding Edmonton Street there are other streets named after western localities: Spokane, Vancouver, Oregon. Edmonton was relatively small in the 1910s but had been mentioned in Detroit newspapers since 1858. For example, on April 20, 1906, the Detroit Free Press ran an article about “Edmonton, the capital of Alberta, one of the newest provinces of the Canadian northwest” having the most northern college in the continent (Alberta College). And a steamship named the Edmonton plied waters of the Great Lakes canal system starting in 1906. Owned by the Mathews Steamship Company of Toronto, the Edmonton docked regularly in the port of Detroit and may have been responsible for the name’s diffusion in the region. 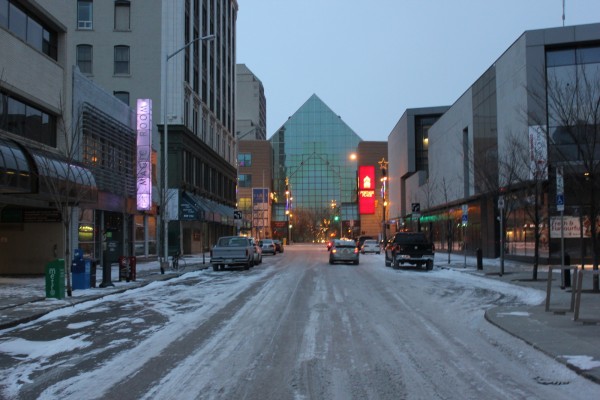 Edmonton Street in Winnipeg appropriately terminates with a pyramid.

Since the Edmonton name originated in the United Kingdom, the street naming patterns there are especially interesting. The Brits have named 15 of their 22 Edmonton-named streets after their grown-up trading post. All of these date from after World War II, when Canadian themed subdivisions appeared in England and Scotland either out of gratitude for our contributions to the war effort or nostalgia for empire. Only five Edmonton streets are clearly tied to the original Edmonton in areas with British-themed street names.

At least half the Edmonton streets elsewhere in the world have Canadian origins, e.g. on a former Cold War military base in Germany, in a Chinese city twinned with Edmonton in 1985, in the suburbs of Melbourne, in an industrial park on the edge of Christchurch, New Zealand. The name is by no means ubiquitous but it has achieved an impressive distribution around the world. Ēadhelm, whoever he was, would be pleased!