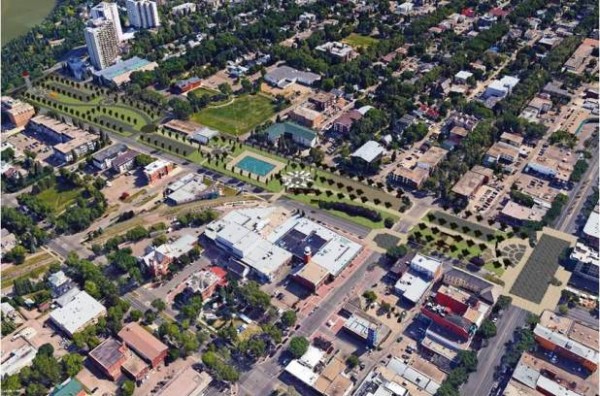 Proposals for a park along Gateway Boulevard from Whyte Avenue to Saskatchewan Drive were not warmly received by some businesses, the Old Strathcona Farmers’ Market organization in particular. Opponents believe that a reduction in parking will ultimately hurt business. Sadly, these debates are not unique to Edmonton, as seen in other big Canadian cities. Here are some talking points to think about before entering this drawn-out conversation.

You think finding parking in Old Strathcona is hard? Fast forward a few decades and try again when you’re competing for the same number of spaces or less with double the amount of cars. This is what living in a growing city means: more people, more cars, more congestion, more frustration. Doubling the amount of parking is an option if you are willing to demolish large sections of the neighbourhood, which is what exactly happened in Downtown Edmonton.

Oversized parking lots create dead zones. For example, the Old Strathcona parking lot is rarely used outside of the summer weekends and it isn’t exactly a happening spot either. Increasing surface parking comes at the risk of reducing the vibrancy that attracted residents and customers to the neighbourhood in the first place.

Providing additional parking in these structures favours more people to travel by car, which in turn exacerbates traffic congestion if the road capacity doesn’t also change. For a growing city, expecting the same level of parking service and traffic indefinitely into the future is cumbersome because mature neighbourhoods have limited space to expand.

Given a shrinking parking supply to car ratio, parking structures are incredibly land-inefficient and not cost-effective for bringing people in and out a central neighbourhood. Instead, there are better ways to increasing potential customers: better transit, store delivery, carsharing, more destinations, appropriate pricing of parking, densification and better connectivity for cyclists and pedestrians. Shifting people towards more active modes of transport and transit will also help ease traffic congestion and the parking squeeze for those who truly are auto-dependent.

Lastly, there is huge opportunity for the proposed park stretching from a commercial street to the river to act as a catalyst for community building and enriching Old Strathcona. As more people live centrally, there is increasing demand for accessible, quality parks in urban settings, which much of central Edmonton is deficient in. Adding these amenities will attract more people, expose users to nature and diverse cultures, raise property values, encourage residential development, strengthen business districts, increase public well-being, and much more. Surely, these are outcomes we as Edmontonians would like to aspire to.

When we debate the future of Old Strathcona’s Gateway Boulevard parking strip, keep in mind that there will always be concerns around parking supply despite how urban and dense Edmonton will be in the future. The key question is whether or not keeping all or part of this diminishing supply is worth the cost of missing out on a grand opportunity.