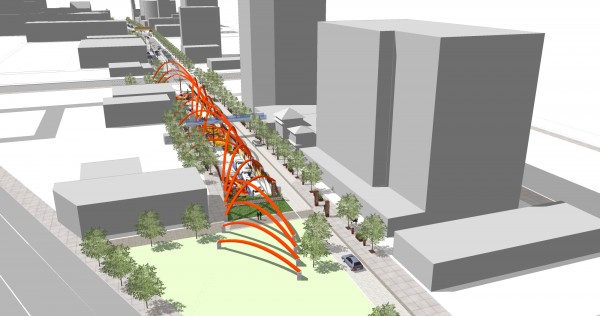 An example of good intentions gone awry: an artist intended to celebrate Chinatown by adorning the LRT portal with a rib cage of a dragon. Chinese residents in this changing and stigmatized neighbourhood however were insulted as they perceived the dragon to be dead.

Ongoing discussions around public art and cultural appropriation among Edmonton’s arts community and its critics have left some artists unsure how to incorporate culture and power into their work. While it’s important for everybody to take topics like discrimination or violence and its intersections with ethnicity and race seriously, there are some contradictions associated with a dominant culture using their position to fight against their own power. At times, it results in a person attempting to provide their own personal narrative or perspective on behalf of a group that they don’t represent, thereby perpetuating that dominance. Depending on the source and degree of the appropriation, this behaviour can be unwelcome or even damaging. Consequently, it leaves people seeking answers as to what is appropriate or not in art, particularly public art that is intended to be enjoyed by and reflect a broad spectrum of the population.

Here, I will provide some points that artists should perhaps be thinking about critically when working with intercultural elements. That said, my understanding on this complex topic is limited and I welcome others to contribute their thoughts and criticisms in the comments section below. These ideas do not provide definitive answers nor should they.

Artists should be constantly questioning of their own biases, assumptions and habits that shape their understanding of and engagement with other groups and cultures. No amount of personal experiences will enable someone to fully comprehend or relate how another individual truly thinks and feels (not to mention the fact that many struggle with understanding their own identities and culture). This means that individuals also cannot be representative for an entire culture. In this continuous process, don’t expect others to point your biases and assumptions out for you since there is often little incentive for them to do so.

An artwork’s focus shouldn’t necessarily centre around the artist’s understanding of another group. Here, there is a prime opportunity for artists to empower others to express their own narrative. Consider this analogy: the artist is acting as a piano player that accompanies a singer. The piano player in this case provides a supportive role, while both roles still have opportunity to express themselves freely, and the result is music that is richer for the collaboration. This arrangement can offer a fuller perspective on the subject matter.

Due to the open nature of public art, artists should try to maximize the work’s value for the public, especially if it’s receiving public funding. This doesn’t mean that it needs to be vetted by the general public for aesthetic approval. Rather, an intercultural piece should at least consider presenting a broader perspective of the issue that is beyond the artist’s own experience. Simply asking individuals to offer approval for your artwork can be taken as tokenism. Instead, consider how the narratives of others can be incorporated into your work. This requires a higher standard for our artists to engage with the targeted groups and public. Effective documentation and communication become necessary skills to provide transparency and strength to the artistic process.

Good intention is not a free pass. In fact, there are no free passes since our personal perspectives operate outside the realm of others. Even if you act on everything mentioned above, exploring experiences that are not your own is always fraught with pitfalls and challenges. This concept may be upsetting or put many at unease, myself included, but at the same time I feel comforted by this lack of resolution.

Some might argue that these concepts are an impediment to free expression. By all means, you are free to express yourself, but you should be prepared to be questioned and criticized at any time. The purpose of the pushback is to reposition the discussion and provide a fuller perspective. Criticisms of the intentions and effects of public art should not scare artists away from approaching such topics ever again; in fact the great value of art is its ability to prompt a questioning of assumptions and an assessment of culture, and would also go against the need for people to take responsibility and an active role in these discussions.

Criticisms and debate should hopefully lead to improved intercultural understanding and appreciation rather than resulting in witch hunts without much direction or purpose. However, I admit there is longstanding frustration associated with opposing these dominating cultural narratives. It can often be a fruitless and emotional process to speak out only to be confronted with more backlash.

The Grandin LRT mural provides a great example of how reconciliation can still occur after the damage has been done. Alternatively, engaging with the community should be seen as an opportunity that adds value and a truly deeper meaning to the piece that puts the public in art rather than the art simply in public.