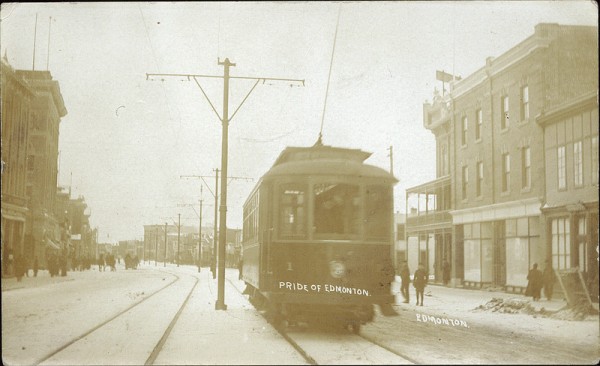 The story of Edmonton’s rail transit begins in 1893, a year after the Town of Edmonton was incorporated. A paragraph is usually enough to mention the 1893 Northwest Territories Ordinance that allowed the town to run a tramway, followed perhaps by the 1894 bylaw to raise money to get the ball rolling. The paragraph typically concludes by noting that the attempt went nowhere. The story then skips to the next failed attempt, between 1902 and 1904, before spending significant time on the effort that resulted in a functioning system in 1908.

In the haste to move the story along, it is often lost just how different 1893 was from 1908. In 1893, the town was still reeling from Canadian Pacific Railway’s (CPR) decision to end the Calgary and Edmonton Railway line on the south side of the North Saskatchewan River Valley in what was to become Strathcona. The former commissioner of public works for Edmonton wrote years later that “They refused to build across to Edmonton, and exerted their influence to build up a new town across the river that would soon remove Edmonton from the map.”

It was pointed out in a July 1893 Town Council public meeting that the problem was not so much that CPR had not run their line across the river, but that they had not built up to its bank. Once ferry service was established earlier that year, crossing the river was relatively easy. Getting in and out of the valley, on the other hand, continued to be difficult.

Council’s intent for the tramway was made clear in two July 26 items, read one after the other. The first gave instructions that the necessary steps be taken “to procure legislation for providing for the establishing of an Electric Railway System, one of the branches of which shall run from the town to the present Railway Station.” The Ordinance mentioned earlier contains specific language about connecting to the railway station, though its importance can be lost in the numerous clauses of the legislation.

The second item gives instructions to “write to CPR with the view to finding out upon what terms the Company will extend their line to a point within the limits of their town as near as may be.” The purpose of the tramway cannot be viewed in isolation of continued efforts to work with CPR to bring the railway closer to Edmonton.

The former commissioner suggested that “Edmonton refused to be docile under this extinction process and immediately took steps towards securing [a] rail connection across the river between the town and the CPR.” The 1893 tramway proposal was sufficiently broad to cover the possibility that the system could generally serve the Edmonton region. Its main purpose, though, was clearly to ensure the survival of Edmonton by bringing the rail service stopped on the south side the rest of the way to town.

By 1908, Edmonton was a city and the capital of the new Province of Alberta. It had a railway connection across the low level bridge; the Edmonton, Yukon and Pacific line. The tramway put into service that year was first and foremost a radial system, connecting the region with the city as the hub. The 1908 story is that of the continuing development of an established city, rather than of the perseverance of a small town.

Trent Portigal is a writer and planner. His newest novel is entitled Cowards (2015).