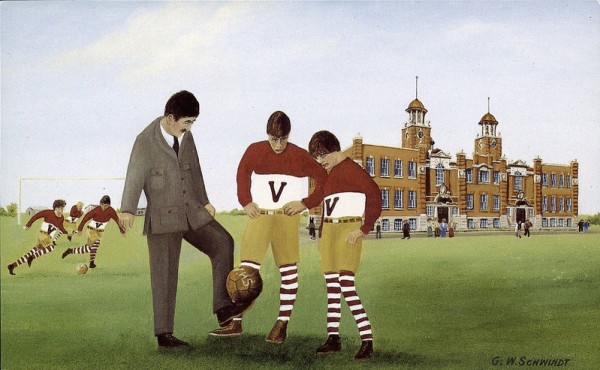 Developing schools and parks involves complex issues of land acquisition, ownership and mixing of uses. The history of provincial legislation and municipal bylaws in Edmonton shows how government grappled with these issues, moving in an uncoordinated and contradictory way towards both collaboration and separation.

Prior to 1963, land for parks and recreation was acquired through expropriation or purchase, among other means. The land was considered Reserve, which was typically indicated on plans and certificates of title as ‘P’, ‘park’ or ‘community reserve’. Land for schools, including buildings and fields, was usually purchased. The municipality had control over park land while the Province and school authorities managed school land.

The legislation prior to 1963 did allow schools to be developed on Reserve land, but only as a lease to a school authority. Schools were grouped with community service clubs and welfare organizations. If it was “beneficial to the city”, the municipality could lease Reserve land to any of these entities.

1963 saw the formalization of the Reserve system in the new Planning Act. A municipality was empowered to require the dedication, without compensation, of up to 10% of land that was being subdivided as Reserve. At the same time, schools were added to parks and recreation as a permitted use for these lands. Little guidance was given in the Act for decision-making regarding what land to acquire, ownership of the land, exactly how it would be used or, if it was no longer needed, its sale.

These shortcomings were addressed in part in the 1970 amendment to the Act. It made explicit that Reserves would be acquired by the municipality and then the portion needed for school purposes could be transferred to the school authority. If the school uses ceased, ownership would revert back to the municipality.

The question of ownership was made clearer in 1977, when types of Reserves were introduced. The designation was set to change automatically based on ownership. When the municipality acquired the land, it was Municipal Reserve. If it was transferred to a school authority, it became School Reserve. If it was jointly owned, it was Municipal and School Reserve.

The notion of cooperation remained with the following clause:

Notwithstanding that land is designated municipal reserve or school reserve or municipal and school reserve, the council and one or more school authorities concerned may enter into any agreement they consider necessary with respect to a use referred to in subsection (2) or for any matter related to the use.

The uses in question remained essentially park, recreation and school. This clause broadened the scope of cooperation from a school facility to all land where the municipality and school authorities had an interest. It was more equitable, allowing for community sports fields, for instance, to be used by a school, in addition to leaving the possibility open for community groups to use the school building.

While many things have changed since 1977, the fundamental legislative approach remains the same today.