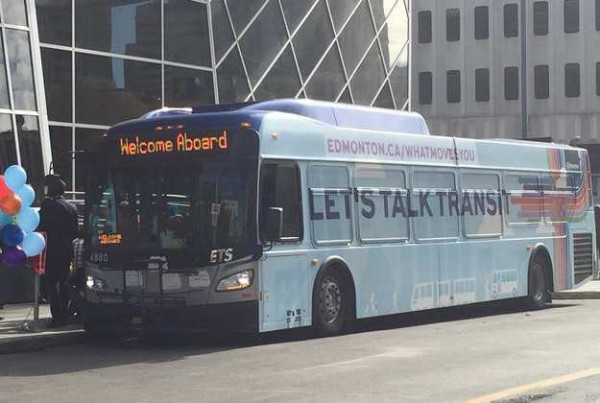 Anyone who has ridden our transit system over the past month can hardly have missed the almost ubiquitous posters and advertisements promoting public consultations this October for the City’s transit strategy. This is the culmination to several years of discussion in media outlets, activist organizations and the general public regarding the future of Edmonton’s transit network. While the general outline of LRT expansion has been in place since the 1970s, the shape of our bus network is open to much more debate: “Should we ensure that every Edmonton household is within a very short walk of a bus stop? Will there be very frequent service on major arterial roads but less in outer suburban neighbourhoods? Can we continue to provide rush hour buses to far flung commuter towns, or would these areas be better served by their own systems that also serve passengers on evenings and weekends? What priority can we give to 24 hour transit?”

Edmonton has much to be proud of when it comes to transit, with a highly patronized rail system and far more bus service than is provided by many comparable urban areas in the Western United States. Nonetheless, it’s very clear from a glance at the ETS map that substantial change is needed. The system remains clogged with far too many redundant or infrequent services that duplicate more effective routes and contribute to confusion for new riders. For example, when I first moved to the city and was trying to head from my hotel, (just off Mayfield Road) to the NAIT area of 118 Avenue; I was presented with a confusing array of services that, according to the service map, were right outside the hotel door. This seems excellent but, in practice, most were effectively useless as they only run during rush hours and the remainder are on a very low frequency. (30-45 mins between buses)

Although Mayfield is a low density area, it could still have effective transit through the use of a frequent grid of routes on major roads that, although requiring riders to walk greater distances to reach stops, would be able to support frequent ‘turn up and go’ service where one would not need to consult a schedule before heading out the door. Furthermore, reduction in effectively redundant services would simplify the system map, making it easier for new riders to navigate. With a simplified, frequent network, it will be possible to increase ridership, even in the most suburban of neighbourhoods.

Don’t just take my word for it; Jarrett Walker, a noted and vocal transit planning consultant who has worked with ETS in the past, often recommends that transit systems in North America maximize ridership by eliminating low frequency, circuitous neighbourhood routes in favour of grid based services that arrive every 10 minutes or so. His firm recently finished a complete redesign of Houston, Texas’ transit system that eliminated duplicate and low frequency bus routes while increasing service on trunk lines.

This sort of change in Edmonton has been proposed by Walker and others numerous times before but the debate often ended ended up bogged down over the false accusation that network change would abandon service to the suburbs entirely. In fact, nothing could be further from the truth. Toronto made a decision in 1963 to focus bus service on frequent routes running on major east-west and north-south streets in suburban areas. Although this means that residents were required to walk slightly further out of their neighbourhoods to reach the bus stop, the network that such a frequent grid creates meant that transit could function as a reliable suburb to suburb service; providing a viable alternative to car use and allowing ridership to grow. Paul Mees, the late Australian transit critic, praised this approach in his book Transport for Suburbia; as it proves that frequent and successful public transit can operate in ostensibly car-oriented neighbourhoods. In a city like Edmonton, where the majority of the built up area has been constructed after the Second World War, a redesign focusing on this type of network could serve the suburbs far more effectively than the status quo where a bus stop is right outside one’s door, but with service only half hourly or hourly. With such long wait times, having a stop nearby is of little practical value.

Without turn up and go frequency, public transit in suburban areas is relegated to being a social service as opposed to offering a true mobility alternative. As our city has struggled to control residential growth in the outskirts, the cost of not substantially redesigning the bus route network may well be the failure of municipal efforts to speed up the mode shift to more sustainable transportation methods. This is one of the challenges faced by those who attended the transit strategy workshops in October and in an upcoming post, I’ll talk about some of the problems that such a redesign could face in our city.