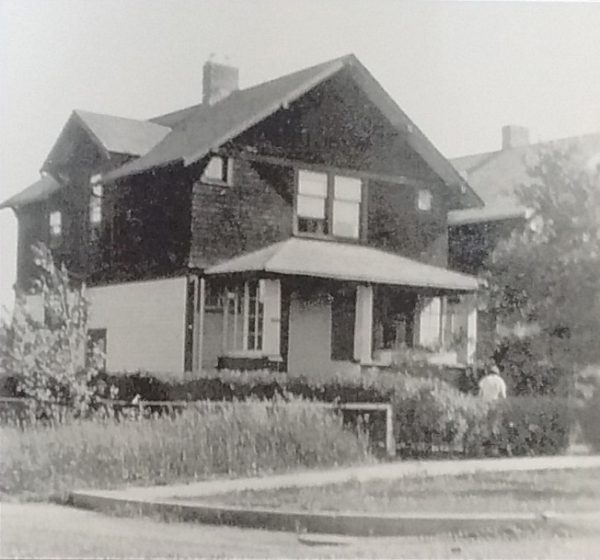 Edmonton’s built heritage only goes back to the late nineteenth century. This generally makes the interpretation of a building simple. There are only so many important people or events that could have taken place in one spot in a little over a century. There are only so many changes or embellishments to the architectural style that could have occurred. Even in Edmonton, however, there are certain places where too much has happened to fit on the interpretive plaque.

The Cecil Burgess Residence is one of those places. According to the plaque, this craftsman-style house was the home to two important people: Percival Sidney Warren and Cecil Burgess. Warren was a renowned geologist and founding member of the University of Alberta’s geology department. Burgess was an architect who designed many significant buildings in Edmonton, both on and off the University of Alberta campus. He was also instrumental in the planning of Edmonton as the chair of the city’s Town Planning Commission. The biographies of both men are of course much more extensive and both clearly deserve to be recognized.

The first residents of the house were French immigrants, the Michelet family. Two adult children of the family, Alex (Charles Alexandre) and Magali (Marie Louise), were behind the creation of Edmonton’s earliest French language weekly, Le courier de l’ouest.  The newspaper ran from 1905 to 1916 and was for a time the only French language newspaper in Western Canada. Alex was the editor-in-chief and contributed much of the content. He was also a respected member of the Franco-Albertan community, being involved in the Société du parler français and the Union française de l’Alberta. He was a strong voice for French language rights in the province.

Magali wrote, among other things, the weekly Feminine Corner column for the newspaper. She had different ambitions than subsequent writers of similar columns in the West. While others were influenced by Eastern trends and the Catholic Church, they viewed their community as essentially local. She saw herself, and her readers, as part of a much larger group. She was an equal to the most prominent women journalists in Quebec and corresponded with them regularly. In one of her letters, she wrote that her “ideal [was] to tighten the links that unify Canadian women from the East and those from the West.”

Le courier de l’ouest reached far beyond the West. It was regularly read in Quebec, even if only for the one column. Magali also contributed work to eastern newspapers and Quebecois columnists occasionally wrote for Le courier. The articles themselves went beyond the domestic advice common to comparable columns, incorporating fiction, essays and other forms on a wide variety of topics. As Sathya Rao described it, the column was not so much a ‘corner’ as a crossroads of ideas and geographies. It brought Edmonton into the heart of the community of Francophone women journalists of the time.

The accomplishments of Alex and Magali are an example of Edmonton’s hidden depths. Cecil Burgess undoubtedly had a more significant and lasting impact on the city. Still, it is worth going beyond the plaque to get a better sense of the variety of contributions people have made, even in a city as young as Edmonton.

Trent Portigal is a writer and planner. His latest novel is A Floating Phrase (2016).