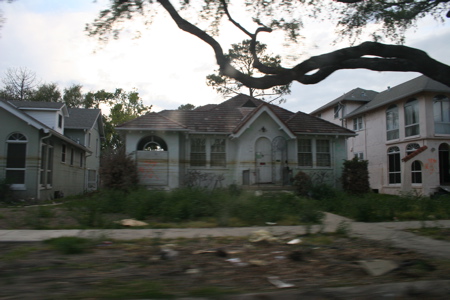 On his blog yesterday Richard Florida posted “Shades of Robert Moses” and asked “So you thought urban renewal and the destruction of neighborhoods and tearing down of historic buildings was a thing of the past. Think again: Not in New Orleans.” He first linked to a CNN article describing the violent clash yesterday at New Orleans city council (video of this is looping on CNN TV this morning) where “the members voted unanimously to allow the U.S. Department of Housing and Urban Development to demolish 4,500 public housing units.”

Much has been written about the reconstruction of NOLA and the form that reconstruction will take. When does a city loose enough of its character that it isn’t the same place? Florida also linked to a New York Times article by architecture critic Nicolai Ouroussoff who explores this and calls for caution in the renovation of a desperate city:

Arguing that the housing was barely livable before the flooding unleashed by Hurricane Katrina, federal officials have cast their decision as good social policy. They have sought to lump the projects together with the much-vilified inner-city projects of the 1960s.

But such thinking reflects a ruthless indifference to local realities. The projects in New Orleans have little to do with the sterile brick towers and alienating plazas that usually come to mind when we think of inner-city housing . Some rank among the best early examples of public housing built in the United States, both in design and in quality of construction.

On the contrary, it is the government’s tabula rasa approach that evokes the most brutal postwar urban-renewal strategies. Neighborhood history is deemed irrelevant; the vague notion of a “fresh start” is invoked to justify erasing entire communities.

This mentality also threatens other public buildings in New Orleans that can be considered 20th-century landmarks. If the government gets its way, a rich architectural legacy will be supplanted by private, mixed-income developments with pitched roofs and wood-frame construction, an ersatz vision of small-town America. That this could happen in a city that still largely lies in ruins is both sad and grotesque.

This sort of redevelopment reminds me of how downtown & inner city Detroit has been rebuilt over the years: pockets scattered here and there like patches on a devastated urban quilt. The problem with these new developments is they have a decidedly un-urban character: suburban style townhouses with garages out front surrounded by big steel fences; CVS drugstores with similarly fenced in parking lots and strip mall architecture; and wide roads where no building meets the sidewalk — all located in what was once dense urban neighbourhoods. In a city like New Orleans that is desperate for any kind of investment, watching this unfold is intensely interesting from a city-building (or un-building) point of view, but rather hard to watch from a human perspective, where the suffering of these Americans does not seem to end. Poor NOLA indeed.