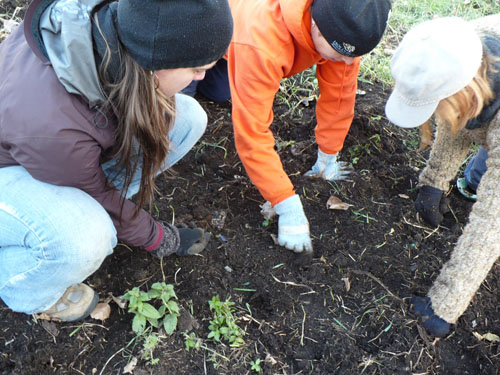 In an abandoned CP Rail lot in the Mile End, a pack of gardeners till the earth and sip Hot Toddy in the November chill. Next spring they will plant red clover and bee balm in the shape of a 20-foot wide Roerich symbol -the symbol of cultural preservation which was placed on the roofs of schools, museums, and historical monuments during WWII to deter aerial bombers.

Emily Rose Michaud, the artist behind the Roerich Garden – which has grown from art project, to gardening collective, to political statement – says her work is a message to the community and city officials that this meadow is culturally meaningful.

The meadow is both a green space and a creative place where people walk dogs, meditate, hold bonfires, play music, and build snow sculptures. Bronwyn Chester visisted the site during one of her tree tours, and over the months, Michaud has also seen ground hogs, skunks, monarch butterflies, as well as walnut and apple trees, which she believes were brought over by squirrels from the Carmelite nunnery next door. It is also a creative space where public art can be made accessible and implicate the community at large: besides the Roerich Garden, the meadow hosted the 2007 edition of Festival Artivistic. 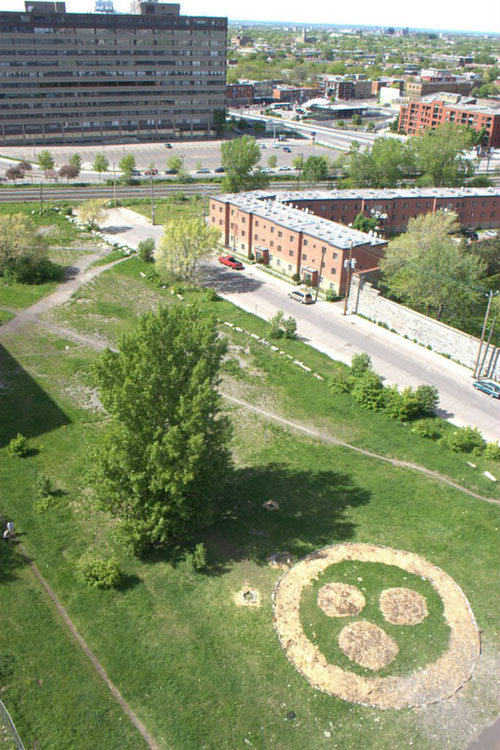 Now, in late fall, the garden is overrun with weeds. “When you’re working with life, there is so much you can’t control – the seasons, the City, community members, dogs that come and piss on it…” Michaud says, “It’s about being in a relationship with something bigger and not having only 1 artist/author.”

“If it becomes city-owned I would have much less control,” She adds. That is not to say that Michaud would not be open to collaborating with the city or another level of government. She would like to see government funding towards decontaminating the soil using a variety of plants to absorb toxins. Eventually, it could become a garden and food staple for the borough.

She would love for the meadow conserved but kept wild and unmanaged in the tradition of the Commons. “Public parks are not a Commons because they are highly managed by an autocratic system,” she says.

But the city has a different plan altogether: to extend Saint-Viateur street to Henri-Julien, and create pedestrian and cyclist links to the Rosemont Metro. Expanding the Mile End street grid would require taking down one industrial building and paving over the site of the Roerich Garden in the next 2 years. 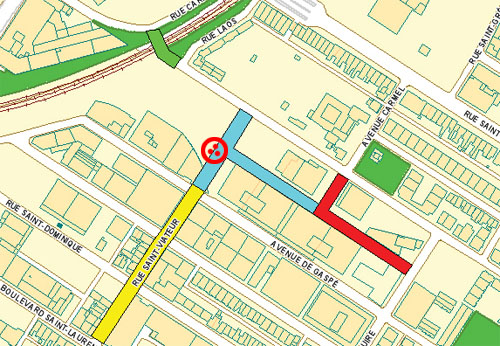 Saint-Viateur East Sector Plan (PDF) from the City of Montreal, with Roerich symbol added by me in the approximate location of the Roerich garden.

Michaud is currently collecting photos, news clippings, personal stories, as well as artistic expressions to create a document that will catalogue and what experiences it has contained and dreams for what this place may become. To contribute join the Sprout out Loud! gardening collective or to contribute to the catalogue, please visit Emily Rose Michaud’s blog or email her at trancemissions@gmail.com.