Living in a city, I find it disturbingly easy to remain blissfully unaware of the resources we use and the wastes we produce. So I jumped at the opportunity to take a free tour of the facility yesterday, tagging along with a friend researching her thesis.

My first surprise was that Montreal’s waste water treatment facility is the third largest in the world. Why such a massive poop-processing plant for a rather small city like ours? 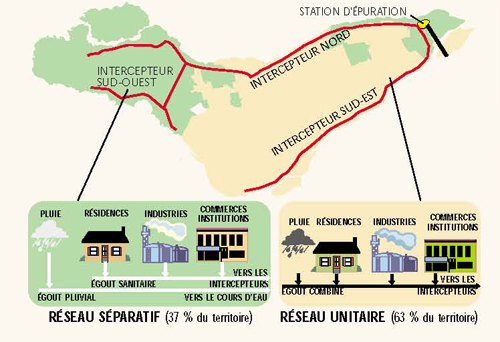 Turns out there are a few reasons: first because we’ve only got one waste water treatment plant for the entire island (Toronto’s got 4). Before this baby kicked into gear in 1984, our toilets and drains flushed directly into into the St-Lawrence river. When they built the collector, they basically ran a big pipe around the island, intercepting the 180 different outflow points of local sewers and detouring the waste to the treatment plant.

The sewage flows from West to East, following the natural slope of the land, and gravity does all the work. By the time it reaches Pointe-aux-Trembles, the collector is about the width of a metro tunnel and 46 m underground. Pumping it up to the surface racks up a $12-million electricity bill each year. At the plant, water from the main collectors pools in 4 massive wells.

The second reason for our enormous plant is that Montreal’s facility handles 4 times more volume per capita than most European plants, and about 1.5 times more than Toronto. That’s partially because we tend to be water hogs even by Canadian standards, and partly because 63% of our territory still functions with combined sewers, which means that toilet water and industrial waste mixes rain water in the sewers, and the the whole lot ends up at the treatment plant. Household waste water makes up only a quarter of the volume and rainwater accounts for 15%.

Here’s the next big surprise: according to our guide, about a third of the “waste water” they receive is actually freshly-purified water that escapes through Montreal’s notoriously leaky pipes that leeches into storm sewers. So not only does the city lose 40% of our purified drinking water due to leaky pipes, it also has to handle an extra 33% at the waste water end of things. Combined sewers come with a second big problem. If the collector or the pumps reach capacity, which can happen during a heavy storm, sewage has to be released directly into the surrounding waters. Since it was overcast during our visit, the operator had en eye on McGill’s weather radar (fourth monitor from the right in the picture above). If necessary, he would decide when and where to release the sewage. In this basin, salts are allowed to sediment out of the water.

The treatment process itself is pretty straight forward: pump, filter, sediment, add coagulant, sediment some more, and then flush. This deals with solids, salts, phosphorus, and heavy metals, but what about bacteria and other organic chemicals? To put it bluntly, what about the poop?

Well, its a pretty big river, says the guide, it gets pretty diluted.

Montreal dosen’t use any biological treatment or disinfectant like they do in Toronto (pdf). Our guide explains that, given how dilluted our sanitary waste is in rain and fresh water, it wouldn’t be practical. However, before flowing back into the Saint-Lawrence river the treated water runs through one last building where secondary treatments such as ozonation could some day take place. We don’t visit that one though – it’s empty.